Kaushalacharya Awards 2021: 41 skill trainers recognised for their exemplary contribution to the skill ecosystem

On the third edition of Kaushalacharya Awards, the Ministry of Skill Development and Entrepreneurship (MSDE) has honoured trainers and launched four new trades at a digital conclave organized.

At the event, 41 trainers from Skill India’s several initiatives and training programmes such as Directorate General of Training (DGT), Apprenticeship, Pradhan Mantri Kaushal Vikas Yojana (PMKVY), Jan Shikshan Sansthan (JSS) and Entrepreneurship were felicitated for their contribution towards creating a future-ready skilled workforce and ensuring that capacity-building is a continued endeavour.

Mr Dharmendra Pradhan, Minister of Skill Development and Entrepreneurship and Minister of Education, said, “It is truly an auspicious occasion today when we get to honour the creator of the universe and the creators of our skill ecosystem. It is important that we lay emphasis on skilling, reskilling and upskilling our youth and all talented people who can work towards nation-building. In the time to come, there will be demand for skilled teachers with upgraded pedagogy, which is modern, scientific, relevant to today’s market demand and of advanced global standards. At the same time, adoption of regional languages while imparting training is absolutely essential. That is when skill training will become truly effective. We must also look at integrating skilling and education at the grassroot level to turn India into a productive economy that can lead the world.”

He further added, “Trainers and instructors can make a huge difference as they mould the best out of students, enabling them to be truly Aatmanirbhar. An efficient teacher will understand students’ requirements better, and therefore, standardization and training of teachers is of utmost importance to ensure the quality of teaching.” 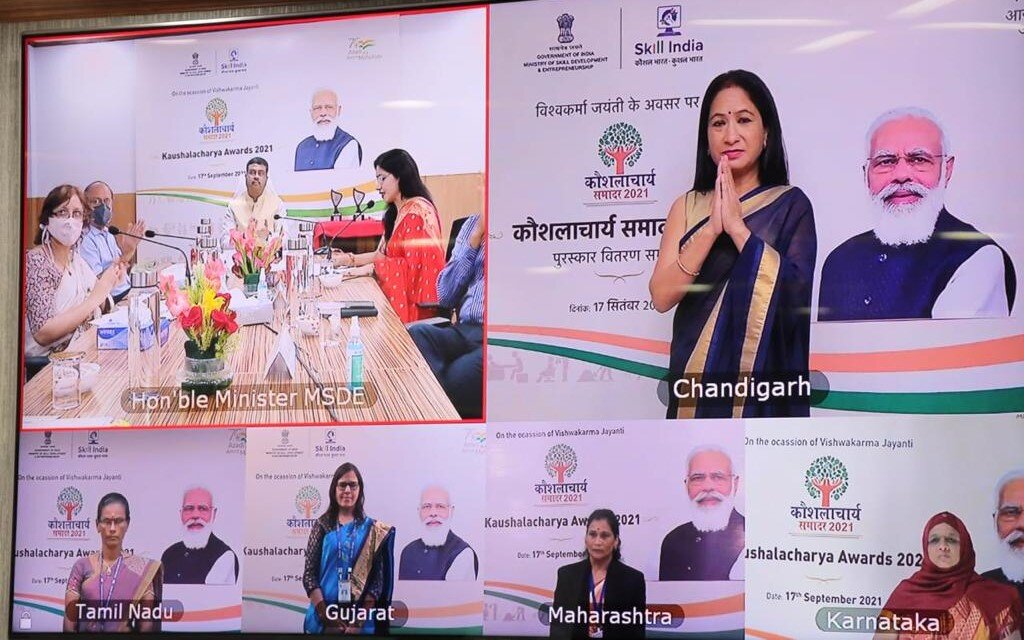 Trainers were honoured for their contribution under various categories. Five trainers were awarded under the two categories of PMKVY Trainer and Excellence in PMKVY Master Trainer. Nine trainers received the award under JSS and two trainers were rewarded for their contribution to entrepreneurship. In addition, five candidates received awards under the apprenticeship category and two trainers were awarded from DGT for non-engineering category. Two awardees were felicitated in the engineering category. Industrial Training Institutes (ITIs), pillars of India’s vocational training ecosystem, had as many as 11 trainers who were felicitated.

Four new trades were also launched in the event under Craftsmen Instructor Training Scheme (CITS) which will be taught in National Skill Training Institutes (NSTIs) including Lift and Escalator Mechanic, Computer Aided Embroidery and Designing, Multimedia Animation and Special Effects and Information Technology, from the 2021-2022 session. On July 15, 53 other trades were also launched training for which is set to begin soon.

The objective of these courses is to train the workforce for a future-ready ecosystem and create a competitive economy with high-wage jobs. The session for the course will commence from 2021-2022 at five NSTIs with 25 seating capacities each located at Howrah, Noida, Indore, Mumbai, and Bangalore. Four of these five shortlisted NSTIs are exclusively for women.

In the past couple of years, a lot of emphasis has been laid on programmes to train trainers and assessors to ensure the objective of the Skill India Mission is realized and the youth get the best and most updated training in their chosen trades. Training of trainers is being provided to exceptional and excellent trainers in National Skill Training Institutes under DGT, various Sector Skill Councils under NSDC, Skill Universities and Private Training Providers.

Kaushalacharya Awards are a step in this direction. By recognising the contribution of trainers to the Indian skilling ecosystem the annual event paves the way for more trainers to join the movement. It is aimed at encouraging experienced skilled professionals to play a role in shaping the country’s young minds by leading them on the pathway to a better livelihood.

Diploma in Mechatronics Engineering and Smart Factory program by NTTF

Diploma in Mechatronics Engineering and Smart Factory program by NTTF