“It started with an aim to make sanitary napkin affordable for myself and my hostel mates,” Aparna says. She got this idea after attending the guest lecture on Health and Hygiene of Women using Sanitary Napkin which was organized by IL&FS Skills trainer V. Venkata Lakshmi.

A. Aparna was born to a family with meagre income, her father is a paralytic patient and her mother was the only source of income. Apart from Aparna, there were two younger daughters to look after. Not having enough money for education, Aparna was about to drop out from school. As chance would have it, the school principal of AP Modal School, noticed her dire circumstances and enrolled her into the school with an additional provision of hostel facility.

It was while living in hostel, she realised that the challenges of poverty and overcoming them was not only her own, it was equally shared by all. When she reached 9th standard, she additionally joined the vocational course of General Duty Assistant (GDA) in Healthcare Sector that was being provided by IL&FS Skills as part of Skills at School Programme. It was during this time that she attended the guest lecture and was horrified, “The synthetic material in an ordinary pad takes 50-60 years to decompose.”

A great deal of deliberation and googling ensued. After an extensive research, she narrowed down her options on making sanitary pads using banana fibre as it easily decomposes within six months. It is also the readiest raw material available in her campus. Apart from the obvious use of the fruit, banana stem is consumed in many regions. Its bark is used to make many household products, but, the fibrous middle layer stem is rarely used. And this very layer was the perfect material for the project. 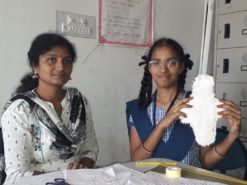 An ordinary sanitary pad is structured of 3 layers. Out of these, the bottom layer is made up of Polymer. Instead, in this project Aparna used the banana fibre sheet. The entire pad is dependent on the bottom layer. This layer should be kept dry and elastic and the fibre itself is brilliant source for absorbing water. “We have used the pulp of banana tree instead of polymer to hold the pad, which comprises of two layers of thin banana fibre layer and cotton,” Aparna says alongside with the support of her guide V. Jahnavi.

“The trunk of the banana tree is smeared with a lot of ash. After the boiling process is completed, we cleanse the resulting pulp to get rid of the ash and cut the dried pulp into two layers of thin sheets. Later we stitched the two layers together putting a thick, cotton layer between the two. Banana fibre by itself is more absorbent than any chemicals we use, thereby providing greater comfort,” says Aparna.

This process would also cost much less than what is available in the current market. However, a lot of awareness is yet to be generated. More importantly, the procurement of banana fibre would also create a new market for farmers, who otherwise burn banana trunks after reaping the harvest. Aparna along with her guide are also looking at the commercial viability of the project.