Apprenticeships can transform skill development of youth in India: SkillConnect Roadshow in Mumbai

by Team NSN
in Events, Industry
0

National Apprenticeship Promotion Scheme (NAPS) has simplified the earlier apprenticeship regime by making it industry friendly and flexible for all stakeholders. The recently held 17th workshop of the SkillConnect Road Show was aimed at sensitising the industry in Mumbai about how these reforms can transform the current skill development initiatives through work-integrated learning. Jointly organized by National Skill Development Council (NSDC), Confederation of Indian Industries (CII) and Deutsche Gesellschaft für Internationale Zusammenarbeit (GIZ) on 26th October 2018, the workshop received an encouraging response from industry and sector skill councils, training partners and others, who actively contributed to the discussion on implementing the Apprenticeship Training in the industry. 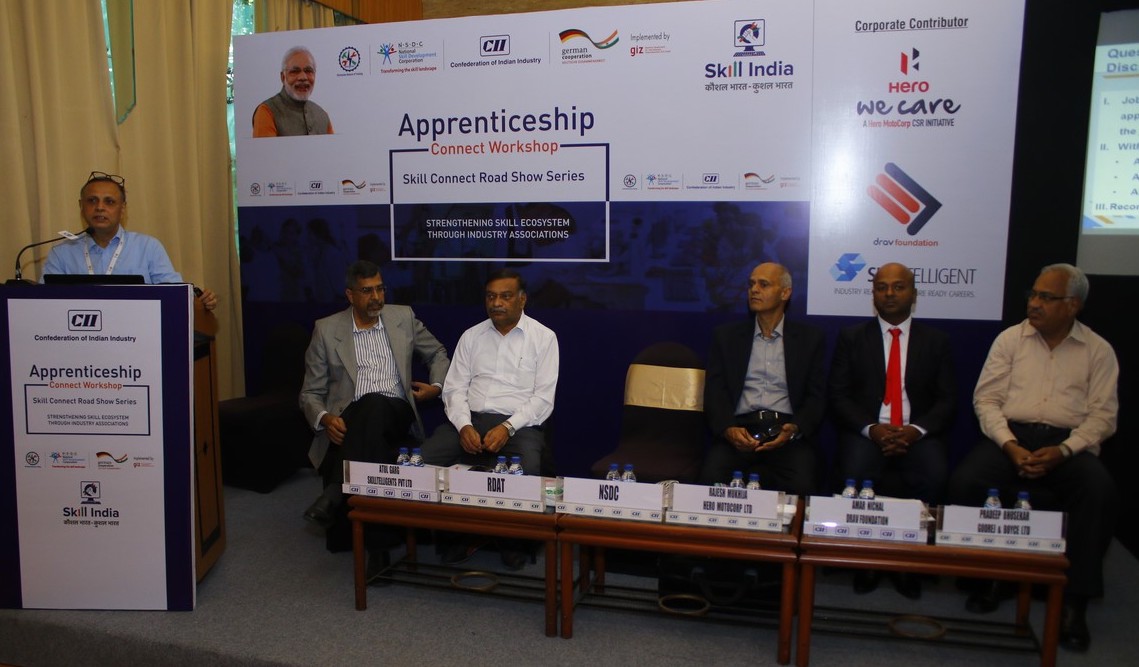 Mr Hari Babu highlighted the issue of finding the right person for the right job. Explaining the need of Apprenticeship Training as a solution to produce business-relevant ready workforce, he hinted that Apprenticeship Programme will help overcome wastage of manpower and resources and reduce the insecurity amongst candidates. He appreciated the new reforms in the Apprenticeship Act for extending its avenues to service sector and non-engineering jobs.

Mr Surajit Roy, Director, Apprenticeship, NSDC, explained the reforms under the Apprenticeship Act that have incorporated most of the demands of the industry to make the apprenticeship regime industry-friendly and shared the new operational framework for Apprenticeship in India. He labelled the regime as a crucial bridge between the high demand and supply of the skilled workforce in the industry. Appreciating the helpful outcome from the previous workshops, he appealed the participants in Pune to highlight the challenges faced by them and promised them a quick follow-up.

NSDC promised to handhold the industry in designing their own courses and helping them avail the benefits of NAPS. With examples of the success in Apprenticeship witnessed by organisations like Airbus and Lemon Tree (Gurgaon), NSDC appealed the industries to hire Apprentices in their organisations and help the cause of nation building. The reforms have made apprenticeship a self-regulated scheme, enabling scrutiny of the apprentice on the shop floor for training and recruitment purposes.

Mr Rajesh Mukhija emphasised on the need for industry stakeholders to connect amongst themselves and explore futuristic opportunities in skill development and Apprenticeship Training. He discussed the successful joint certification of more than 14,000 market mechanics in “Motorcycle Service and Repair” trade by Hero MotoCorp and Indira Gandhi National Open University. “The Skill Connect Road Show workshop has been a learning experience and we shall all take skill development to the next level,” he said as he urged the participants of the workshop to engage apprentices.

Mr Pradeep Bhosekar presented success stories of apprenticeship by the example of their newly-designed trades of “Interior Designer and Decorator” and “Computer Operator and Programming Assistant (COPA)”.

Mr Amar Nichal explained the organisation’s efforts to skill people in rural areas including tribal belts in Vidarbha to make them self-sufficient and bridge the psychological industrial gap. Identifying the huge potential in rural belts, he discussed the various skill development initiatives undertaken to skill youth for competitive exams like JEE and NEET besides vocational education.

Ms Anita Sharma, Senior Expert, Indo-German Vocational Education and Training, GIZ India, presented the experiences made thus far from the implementation of the pilots in the clusters at Bhiwadi, Bengaluru and Aurangabad. Stressing the role of private sector in skill development, she urged the participants to take up the opportunity of skilling the youth by hiring apprentices. The importance of creating awareness on skill development and training at school level was also highlighted.

CII presented the organisation’s 360-degree assistance in the Indian industrial ecosystem and offered to support the industries through handholding, providing a help desk and addressing both the demand and the supply side with respect to the Apprentices by systematic identification through Model Career Centre, which have been established to overcome the limitations of the Employment Exchange.

By means of interactive session, the participants were invited to deliberate on the inputs provided by NSDC, CII and GIZ. The results of the group discussions were shared in plenary, which included the job roles which are required by the companies including the number of apprentices against each of these job roles; the support which is required for enabling the companies for effective participation in apprenticeship programme and the challenges they are currently facing were noted.