by Guest Author
in Events, Industry
0

Keeping the ever growing importance of fisheries and aquaculture sector and the eminent second position occupied by India, only behind China, the Aquaex 2018 was recently held in Hyderabad from 15th to 17th March to highlight the same. The event was organized by Society for Indian Fisheries and Aquaculture (SIFA), in association with Department of Fisheries, Telangana. The event showcased the growth and potential of this fast growing segment of blue farming and recorded a large number of footfalls from Industry partners, scientists, fisher folk, aqua culture farmers and even some IT professionals who were foraying into this area with great enthusiasm and interest People from all over the country attended. Agriculture Skill Council of India was also a sponsor in this expo.

Agriculture Skill Council of India has recognized the need for skilled personnel at all levels in this sunrise sector. It has identified 26 job roles in this space keeping in mind, the scarcity of trained manpower in this sub-sector .Detailed qualification packs for these job roles have been created broadly in three areas viz. aquaculture with thirteen job roles ,capture fisheries-three job roles and Assistance (fisheries) -ten job roles. According to Dr. Satender Arya, CEO of ASCI-India, the vision of Agriculture Skill Council of India is to create a sustainable industry aligned ecosystem for robust skill & entrepreneurship development in Agriculture & Allied Sector such as Fisheries and Aquaculture, Dairying and Poultry. 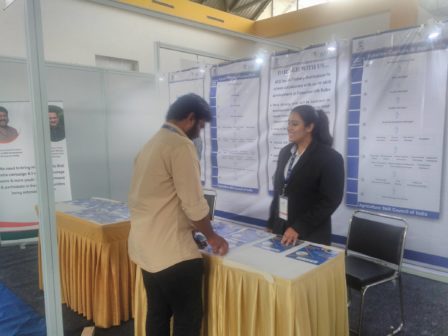 There was an enthusiastic participation and enquiries by a number of organizations about the role played by ASCI in promoting the skilled manpower pool in up scaling the blue revolution. According to Mr. Ramachandra Raju, President, SIFA,India recorded 10.79 million tons of fish production during 2016-17 fiscal year. With annual export of fish and aquaculture crossing to INR 300 billion (USD 4.60 billion, EUR 3.91 billion), the sector has capacity for further growth, as there is huge potential to increase domestic consumption as well as exports, he felt.

Some organizations actively expressed interest in partnering with ASCI to train skilled manpower and have sought membership, while many enthusiastic pre-university and college going youths expressed keen interest in the vocational job roles evolved by ASCI, during their interaction with Dr. (Lt. Col. Retd) Samarendra Narayanan, Director, ASCI (South) at the ASCI booth. Some of the scientists from abroad who were attending the event also visited the ASCI booth and lauded the pivotal role played by ASCI in enhancing vocational skills in various job roles in fisheries and aqua culture. Dr. Suresh, consultant to ASCI and one of the key organizing members was a keynote speaker and also interacted with many dignitaries, scientists and students during the event. Aqua ex India was also covered by various media channels.

Swiss apprenticeships as a springboard to a global career