A Sewing Machine Operator, a Tailor, or a Fashion Designer? Which of these terms creates an aspiration for the job role? It is the Fashion Designer, right? DDU-GKY programs of Ministry of Rural Development (MoRD), have been designed by keeping the aspirational value in mind. ATDC being a public vocational institute offers higher-end longer duration shop-floor courses like Industrial Engineer, Fashion Designer, Production Supervisors, and Merchandisers, etc. in the Apparel industry thus providing career paths to the candidates meeting their aspirations.

To understand more about the implementation of DDU-GKY project and these higher-end shop-floor courses, their reach in the grassroots level, and challenges while implementing it, we spoke to Mr. Gopal Bhasin, Chief General Manager & Project Lead DDU-GKY & State Skill Development Missions at Apparel Training & Design Centre (ATDC), a public vocational institute in the Apparel industry. Let’s read on…

Q: Could you tell us about DDU-GKY programs implemented by ATDC and how are they being taken forward successfully?

A: From 2010 till 2017, being nominated as Nodal Agency, ATDC implemented the Integrated Skill Development Scheme (ISDS), one of the flagship programs of Ministry of Textiles (MoT), GoI and trained over 2.17 lakh candidates. In Feb 2017, the ISDS was abruptly paused by the MoT. Therefore ATDC started working with most of the State Skill Missions including the Ministry of Rural Development (MoRD).

Later, a Memorandum of Understanding (MoU) between MoRD and ATDC was signed permitting ATDC to conduct DDU-GKY projects in all the States and Union Territories. The first MoU was signed with the State of Jammu and Kashmir in the year 2018 under the HIMAYAT project. Initially, Despite the challenges faced in the implementation of the stringent guidelines and mobilization of candidates in Jammu and Kashmir, ATDC is executing the project there and also in the States of Telangana, Tamil Nadu, Jharkhand, Odisha, and West Bengal. We are next planning to implement it in Madhya Pradesh as well.

Q: Could you elaborate on your collaboration with various State Rural Livelihood Missions (SRLM)?

A: Hon’ble Minister of Rural Development, state of Jammu and Kashmir was very keen to bring higher-end courses for the youth and even visited ATDC NHO at Gurugram and the team was impressed by the reach of vocational skill courses by ATDC. It was suggested to take up the HIMAYAT project under DDU-GKY in the state which is 100% Centre Sponsored Scheme to train 132,000 candidates. The first centre was set up in Samba, Jammu. We subsequently moved to states of Odisha where ATDC had been successfully working with the state government. Being aware of ATDC’s strength of training, ORMAS (Odisha Rural Development and Marketing Society) sanctioned the project. In DDU-GKY, besides the domain skill training, capturing candidate’s attendance at the centre and hostel is a crucial part of the project including residential facilities and nutritious food, etc.

From Odisha, we moved to Tamil Nadu and then to Jharkhand. Jharkhand was an interesting case for us. The state had a number of Apparel export companies offering captive employment by setting up factories in the state and also working as PIAs (Project Implementation Agencies) to train the candidates. Thus, it was a major challenge for ATDC to convince about the qualitative difference between ATDC being an apex institute offering career-path to the candidates while other PIAs have objective to train only in the entry-level courses like SMO, etc. and put the trainees on the sewing machine for production. Thus, Jharkhand SRLM partnered ATDC to conduct value-added longer-term courses such as Production Supervisor with an added module of Industrial Engineer Executive thus providing locally trained supervisory workforce to the apparel factories.

Q: Was it a challenge to mobilize students to take up these courses?

A: It was tough initially to convince the youth to take up courses for the Apparel industry. We deployed a team of 4-5 field mobilizers to mobilize and counsel the youth especially girls from the hinterland areas of Jammu and Kashmir.  In other states like Odisha and Jharkhand the response was quite encouraging as we already had our training centres. We were assisted by District and Block Officers who would give us different slots to visit blocks.

Q: Where are students trained at ATDC placed?

A: Most of the students trained at ATDC are placed in export manufacturing companies who are members of Apparel Export Promotion Council (AEPC).  ATDC has been recognized by AEPC as preferred training partner.

DDUGKY is a flagship program of MoRD to open up opportunities for rural youth and transform their lives. This is for youngsters who do not have a strong educational background due to economic conditions in the family and even general health and nutrition are a big challenge to them.

A: Organisation that would like to implement DDU-GKY programs must understand that the program is not just for training but  it is more comprehensive. In DDU-GKY programs, there must be a clean environment for training and good residential facilities. The scheme is designed in such a way that many of its aspects have become benchmarks. So, that towards the end of the course, visible improvements are expected in students in health, etiquette, and confidence to face interviews and adjust to a new environment in the Apparel factories. 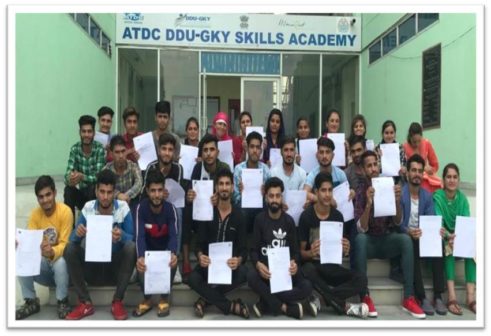 Q: How is ATDC making a difference with DDU-GKY Courses in terms of student retainment?

A: Sometimes, students would want to go back to their villages as they find it difficult to adjust to the new food or culture and city life in some cases. At ATDC, we ensure that students are exposed to the simulated working conditions in the factories with “on the job training” during the course. Right from the time of mobilization of students, parents are counseled about the courses and the employment opportunities in the Apparel industry. We take a consent letter from parents before their ward is brought to TC for training and later on for placement. We further hand-hold the students for about 3-12 months after the placements and keep track of their well-being.

Q: What are the expansion plans of ATDC?

A: From the 7 states where we run ATDC DDU-GKY Skills Academies currently, we would like to gradually move to other states like Rajasthan, Karnataka, and Maharashtra. We want to increase our footprint in DDU-GKY program with the support of State Rural Livelihood Missions. I hope in the coming years as envisaged ATDC’s will have the presence of DDU-GKY in more states.