After automobile skills training Harish dreams of his own garage

Our guest author, Shreya Srinath, is an undergraduate student at State University of New York at Geneseo NY. Writing social impact stories is one of her passions and here she presents the success story of Harish, who underwent training in automobile skills for SKF from LabourNet. Shreya is keenly observing and studying the skill development space by interacting with several beneficiaries of training in the unorganized industry sector in India.

Here’s Harish’s story in the words of Shreya:

My name is Harish, and I live in Hosur. I travel every day to the SKF center in Bommasandra to attend the classes – I haven’t missed a single day. It is a 30 minute journey, which I make by auto and the local bus.I first heard about this course from my uncle. Working in his garage, he showed me a pamphlet which advertized the training program. I was not interested at first. I was happy with the current job I had. I did not really enjoy my school education and had quit after I completed my 10th standard. Since then, I had only worked with my uncle as a mechanic for 5 years and I was satisfied with my current life.

Therefore, I bluntly refused as I did not want to return to education. But, my uncle convinced me to give it a chance and took me to the center to meet with the manager. I was reluctant, but went for the sake of my uncle. When we reached the center, it was massive and looked exactly like a college. Upon seeing this, I knew I was right and refused to meet with him and forced my uncle to turn around and return home. 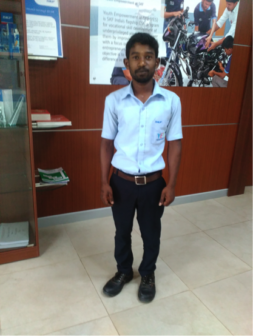 The next evening, the center manager called up my uncle and asked to speak to me. I knew that he wanted to convince me to join and I refused again. However, this time he explained the course structure to me. He told me that there would be tests and exams but I would not have to write much as they would be multiple choice questions. There would be internal assessments too and it would be like any regular course. But the only difference was that they would actually teach me the parts of an automobile- I would get to work on them during the course and it would be a part of our curriculum. While I was interested, I was still skeptical. I asked him why I should join if I already knew the parts of an automobile and knew how to fix one. He responded by saying that although I knew the parts and components, I knew them out of practice. If I attended the course, I would be able to learn more about automobiles and that would enable me to get a better job in the future.

It has been 2 months since I have joined the course and I don’t regret doing so. The course is everything I was promised it would be and more. I am able to do very well in classes because I already knew about automobiles, but now I’m excited to learn more. That’s why I have never missed a single class so far and I do not intend to either.

After I complete the course, I want to own my own showroom for bikes. I am working towards this now and am excited to see how my dream will pan out in the future. If I hadn’t attended the course, I would have never considered owning my own garage and would still be working for my uncle. Therefore, I’m glad I attended the course and I’m even happier that I was able to convince my friends to join this course as well and hope to convince more of them to do so.

How internships connect skills with jobs

How social skills help while studying in global classrooms

How social skills help while studying in global classrooms