How Bhirendra found automobile training more interesting than his school

Our guest author, Shreya Srinath, is an undergraduate student at State University of New York at Geneseo NY. Writing social impact stories is one of her passions and here she presents the success story of Bhirendra, who underwent training in automobile skills for SKF from LabourNet. Shreya is keenly observing and studying the skill development space by interacting with several beneficiaries of training in the unorganized industry sector in India.

Here’s Bhirendra’s story in the words of Shreya:

My name is Bhirendra. Originally from a small village in Uttarakhand, I moved to Bangalore last year. I did not want to leave my home, but I was forced to do so. There weren’t any good jobs available and I wanted to earn enough to support myself and my family. That was not possible with the jobs available in Uttarakhand or any of its neighboring states. Thus, I considered looking at cities such as Delhi and Mumbai because they were closer. However, I was not satisfied with the job prospects there and proceeded to speak to my uncle who lived close to Bangalore. 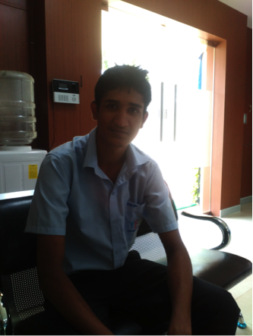 I never wanted to go to Bangalore. It was down south and it was far from my village. I was also nervous because I did not speak the language. However, at the age of 19, I left my village in Uttarakhand for Bangalore.

When I first arrived in Bangalore, I was overwhelmed. Unfamiliar faces conversed in different languages, eating foods that I had never heard off. I was easily alienated, unable to communicate with anyone around me. However, I felt better when I was greeted by my uncle who took me to his home in Bommasandra. I later joined BTL College to complete my education. I had previously only studied till 10th standard in my village and decided to complete my PUC and  B.Com, hoping to increase and improve my job prospects. But things did not go as I had hoped. I was unable to understand what they taught in my classes and soon lost interest. I stopped going to classes all together at one point and often stayed home, helping my uncle out with whatever he required. I was not proud of what I was doing, but I did not know what else to do.

“If I had not attended the training program, I would have probably dropped out of college and would be looking for any job without being specific. I would have never realized that I actually liked fixing cars.” Bhirendra

One day however, I tried to concentrate in class and attended college. I was unable to do so and was just about to leave when I heard a few students talking about some automobile training program. Curious, I followed them and heard a man advertising this program. I decided to collect more information and spoke to him after the crowd had dispersed a little. Later that evening, I returned to my uncle’s house and informed him of SKF’s training program and expressed interest in joining it. I was surprised to find that he was as enthusiastic as I was and encouraged me to attend the 6 month long course. The only problem was that I had to tell my parents. Hesitant, I called them up and explained the situation. At first, they disapproved. They felt that I should remain in my college and work harder to increase my scores. However, that was not possible and after explaining the situation to them, they reluctantly agreed with my decision.

On the first day of my course, I was nervous and quite scared. It was an entirely unfamiliar environment that overwhelmed me. Moreover, I still did not speak a word of Kannada or Tamil- I was afraid of being alienated once again. But that did not happen. I found that people could understand me, and I could understand them even if we didn’t speak the same language. This was primarily due to the smaller class sizes, which made me feel more at ease. I was able to pick up concepts easily, even the harder ones. I began to come to class every single day and realized that I enjoyed this far more than sitting in the classroom and reading textbooks. I liked working with my hands and I liked fixing cars.

So far, it’s only been a month. I still have 5 more months of training to complete but I’m excited to see where this will lead me. I plan to work in the center after completing training for a bit and then will expand my horizons. But for now, I’m glad I joined this training program. Had I not, I would have probably dropped out of college and would be looking for any job that came across my path. I would have never realized that I actually liked fixing cars.

Schools and their role in skills training

Schools and their role in skills training