First CXO meet for DDU-GKY in Maharashtra: A Report

by Guest Author
in Government, Reports
0

New ideas, experiences and projects excite us and ignite our curiosity. Yesterday, I attended the first CXO meet for retail industry under DDUGKY organised by the Maharashtra State Rural Livelihoods Mission.  Deendayal Upadhyaya Grameen Kaushalya Yojana (DDU-GKY) is a flagship program of Government of India which focusses on skilling of the rural youth through Project Implementation Agencies (PIAs). On completion of training the students are placed on jobs in various sectors with support for post-placement tracking, retention and career progression. The Implementation begins with mobilization and selection of the right candidates, training them and providing on-job training, assessment and placement.

Maharashtra has target of training of 58,335 rural Youths under DDUGKY by March 2019 and till date 22,000 rural youth have been trained under the programme. The placed youth receive a salary in range of Rs 6,000 to Rs15,000. About 17% are placed in the retail sector, 16% in Hospitality, remaining in BPO, ITeS, Security, Banking and financial services.  Retail sector is among the most preferred sector and chosen on priority by the students and Project implementing agencies of Maharashtra. 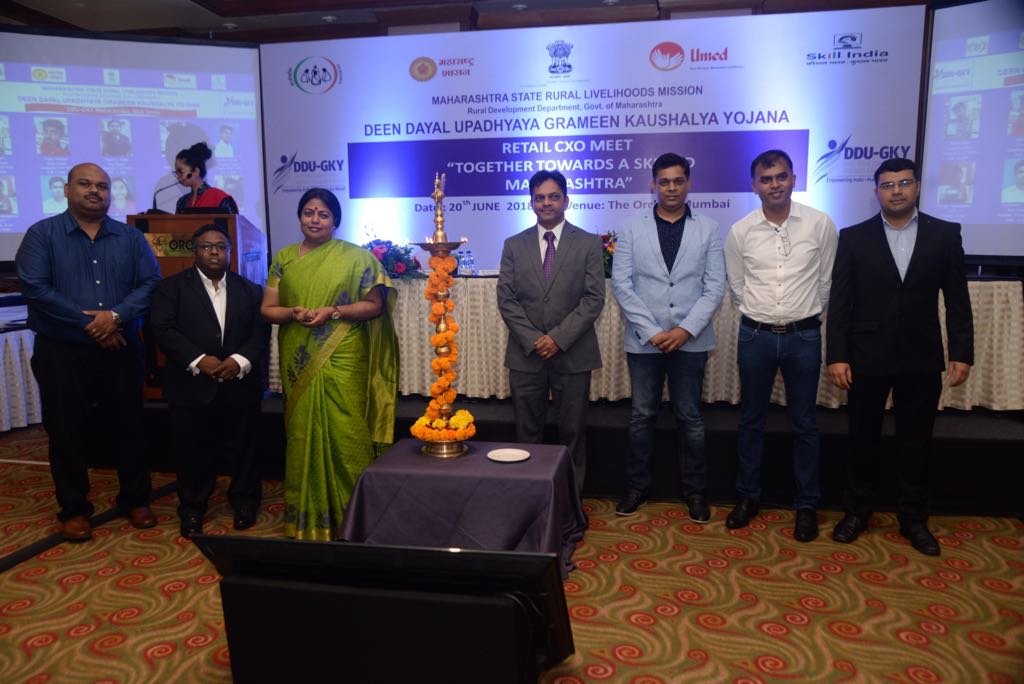 It was therefore decided to organise a CXO meet of the corporate chiefs of the retail sector to establish a stronger connection between the PIAs and youth trained under DDUGKY. Representatives of companies like Cafe Coffee Day, Westside, Shoppers Stop, Future Group, Reliance Group and Retail Association of India attended the meet.  Five Skill Icons trained under DDUGKY and working for over one year shared their experiences.

It was extremely encouraging to hear Dnyaneshwar Sutar speak confidently in English. An unemployed science graduate , unsuccessful in competitive exams, he got employed in Dominoes Pizza outlet after getting trained under DDUGKY and his life is completely changed now. He earns above Rs.15,000 a month and is also completing his MBA in HR. He is thankful to MoRD, DDUGKY, for the free training, and lodging and boarding facilities provided. Four others who were trained along with him are also placed. The scheme has been a boon for rural youth since they acquire skills for speaking in English along with the trades they choose.

Four girls, Hasina Kharode, placed in Tata Star Bazaar, Madhuri Thotam from Sindhudurg placed in D’mart as a cashier, Shankita Pawar and Deepali Gurav , both working as packers in D’mart Pune also expressed their gratitude to the MoRD for initiating a programme which imparted skills to them and gave them confidence. They were thankful to DDUGKY for transforming their lives. 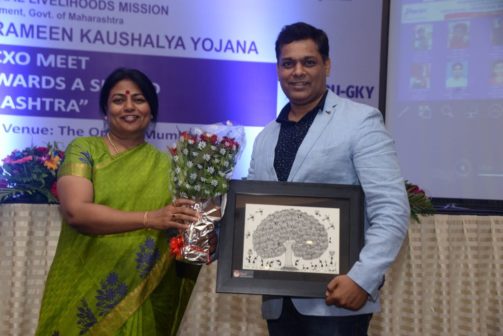 The professionals from the retail industry present at the CXO meet acknowledged that DDUGKY was providing a great platform for growth to the rural youth and the industry. However for all the companies, tackling retention of the employees and managing attrition was a major concern. They also felt it was important that the candidates have good conversation skills. They emphasised on presentability of the employee and the need to be groomed with knowledge of English.

It was discussed that companies make their annual budget plans for recruitment and engagement of human resources. These could be shared in advance with the PIAs of DDUGKY for supply of manpower.  It was important that the companies interact with the PIAs and spell out their expectations.  The retail industry is dynamic and is continuously changing. E-commerce and online business were in trend and would be equally in demand with physical retail stores soon. It was important to be prepared for the same. Retail was thus in extension mode and India has a huge potential. 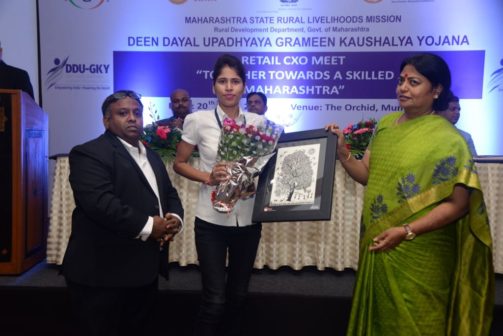 Cafe Coffee Day (CCD), the indigenous coffee company itself has 2000 outlets 10000 employees. Initially their staff was under-trained or untrained but their services improved when they employed those trained through DDUGKY. It also reduced the attrition to 30 percent and increased retention. Those employees were eager to learn and grow too. This had a positive impact on their happiness quotient. It is a matter of great pride and happiness for CCD that Poonam Kumari, trained at a centre in Jharkhand and who now works in Mumbai, was sent to the IWCA summit in Mexico as a coffee connoisseur, where she was educated on developments in the world of coffee and trained by champions from the World Barista Championship.

Lawrence Dsouza, Director- Retail of the RAI, said that there were more than 1.6 crores stores but only about 10 percent had organised staff and labour. There was a greater need in smaller cities, local hyper markets and super markets which needed to be tapped. The PIAs could also participate in the meetings of the local chapters of the RAI and also in its events.

India is ranked first in the Global Retail Development Index 2017, backed by rising middle class and rapidly growing consumer spending. Retail industry in India is expected to grow to US$ 1.1 trillion by 2020 from US$ 672 billion in 2017. It accounts for over 10 per cent of the country’s Gross Domestic Product (GDP) and around 8 per cent of the employment. This sector offers great potential to boost the State’s economy and the employment generation.

At the Magnetic Maharashtra meet in February 2018, the Hon’ble Chief Minister of Maharashtra has set target of leading Maharashtra to a 1 trillion-dollar economy by 2025. This requires huge investment in infrastructure and broader initiatives for skill development. MSRLM through DDUGKY is contributing in achieving this goal by bridging the skill gap.

The idea of “own a batch” was put forward whereby any company can undertake a batch of 10 to 12 or 25 students and facilitate their trainings according to the needs of their company.
DDUGKY is on a threshold and has great potential to attract global retailers. This CXO meet was the first step to introduce all stakeholders to the possibilities of capitalising the students trained under DDUGKY. So into the shops, super markets and malls….jet… set… go….

Disclaimer: The content (text, pictures, videos, slideshows and audio) are provided and approved for publishing by the client who is featured in this article. National Skills Network – NSN is not responsible for any copyright or related issues with any such type of content.