by Team NSN
in Events, Organization

The felicitation event by Dhatri Foundation was organised at Hotel Swagath Grand in Habsiguda at Hyderabad which incidentally employs 105 girls trained under DDUGKY at Dhatri Foundation in various establishments.

Brimming with confidence and exuberance, the young girls streamed in and in no time, the big hall was filled with hubbub as they exchanged pleasantries in Mararthi having met after a long time. Dressed in their best and made up for the alumni meet, they were taking selfies in small groups, along with their favourite instructors to pose for the picture.

The girls, all aged between 18 and 23 years, felt proud and delighted with their jobs in Hyderabad and being able to earn a 5-digit salary. They seemed very contented and thanked Dhatri Foundation, for having made their dream, of being independent and self-sufficient, a reality. 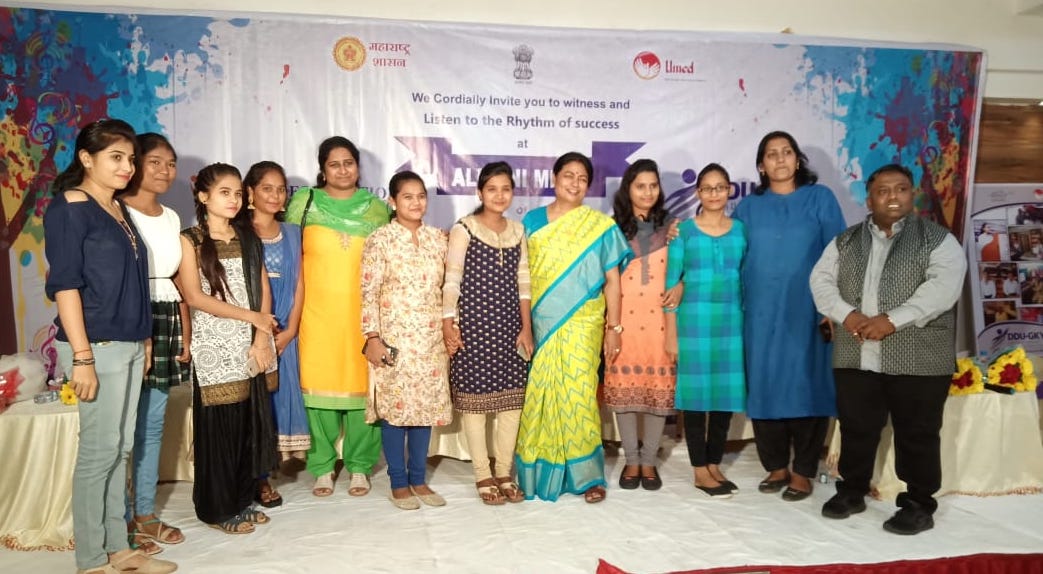 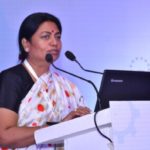 “Ms. Hyma, Director of the Dhatri Foundation, an award winning PIA under DDUGKY at MSRLM came to my office one afternoon to talk regarding organising an alumni meet for about 150 girls who had been trained at her DDUGKY centre in Nagpur and placed in Hyderabad. She wanted me to felicitate the girls during the event. Hyma’s undying spirit and passion is exemplary. I had always been curious to see how she managed to spin off this success and readily agreed.” Mrs. R. Vimala, IAS, CEO, MSRLM

Dhatri Foundation has won awards twice for offering quality training in skill development to youngsters in the automotive sector, BPO, Hospitality and retail marketing. They have been providing a bright future to youth hailing from the rural areas for the last 10 years, by equipping them with skills and making them industry-ready under DDUGKY Maharashtra project.

Though hailing from different villages around Nagpur, these girls had dared to venture out of their comfort zones and take up jobs in a different state, all due to the motivation and training offered by Dhatri. For a duration of three months, the Dhatri team provided boarding facility and rendered training in skill development to more than 700 girls, who had pursued education up to Class XII, without them having to shell out even a penny from Nagpur and Wardha districts under Maharashtra state rural livelihoods mission DDUGKY program. 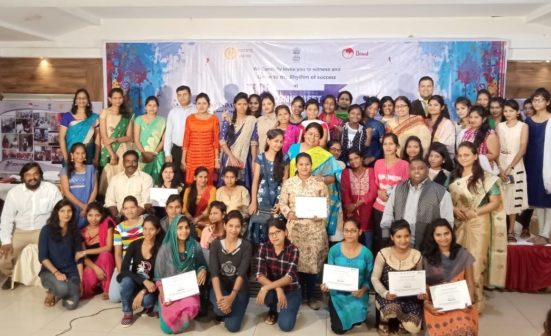 A different state, foreign language and unusual food did not deter the girls from taking up the challenge to prove their mettle. Surprisingly, even the employers, who gathered at the meet, were happy to have recruited the girls in their workforce. Initially, many of the companies had inducted girls trained by Dhatri Foundation in single digit numbers but later, impressed by their performance and work, approached Ms Hyma, for more girls, whom she could send in a matter of few days.

The parents of the young employees became emotional when their little daughters thanked them for their continuous support. All those who attended the event applauded the girls who were trying to financially support their parents. A majority of the young girls send a large portion of their salary home to help their farmer parents run the family, as their income is meagre.

Mrs.R. Vimala, IAS ,CEO, MSRLM ,who graced the programme, as chief guest expressed happiness upon seeing a large number of girls at one place and felt that their initiative to uplift the economically backward youth in rural areas was reaping desired results. George Bernard shaw, SMM of MSRLM who was also present at the programme, expressed satisfaction over the progress of their project.