The Ministry of Skill Development and Entrepreneurship (MSDE) organized a day long consultative workshop  with representatives from States and Union Territory on 18th February 2020, to review skill development across geographies and segments and to seek their valuable suggestions on streamlining the upcoming initiatives. The key thrust of the workshop was to increase the participation of the District Committees for better coordination of the skill efforts in each district and to achieve the broader objectives of the Hon’ble Prime Minister’s vision of making India the skill capital of the world.

During the workshop, Vision 2025 was also discussed which lays out the key focus areas and ready-to-implement roadmap for promoting Skill Development and Entrepreneurship in country.

The aim for organizing the workshop was to unlock the true potential of the youth by making skills aspirational and building sustainable livelihood pathways for them. The State and Union Territory representatives shared their regional perspective on the various aspects of the Skill India Mission including Apprenticeship, Long Term Skilling; Sankalp and Strive initiatives; Entrepreneurship; Short Term Skilling and the next stage of the Pradhan Mantri Kaushal Vikas Yojana (PMKVY), PMKVY 3.0 and the related challenges and opportunities. 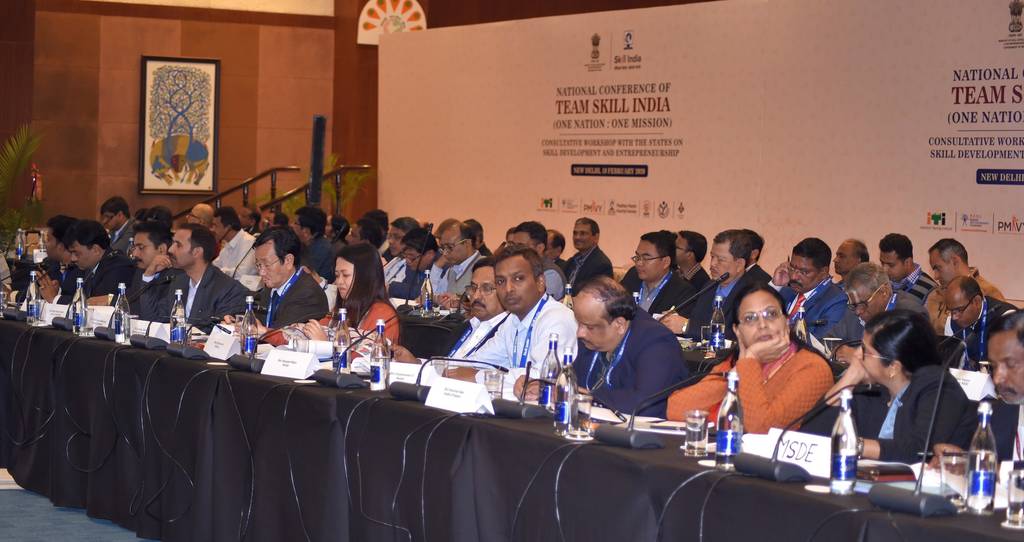 The center proposed that the District Skill Committees (DSCs) should be further empowered with substantial fund allocation to ensure stringent monitoring and evaluation of skill training under the next phase of Pradhan Mantri Kaushal Vikas Yojana (PMKVY).

Related interview: An interview with Ms. Juthika Pathankar, IAS, Additional Secretary, MSDE on how SANKALP is being implemented to ensure efficiency and governance in skill development at the district level in India – https://www.nationalskillsnetwork.in/how-sankalp-is-being-implemented-to-ensure-efficiency-and-governance-in-skill-development-at-the-district-level-in-india/

Towards this, MSDE has recently introduced the Mahatma Gandhi National Fellowship (MGNF), an initiative designed and implemented by IIM Bangalore in collaboration with State Skill Development Missions (SSDMs), where fellows will be posted in district for 2 years working closely with the district administration to create specific State Skill Development Plans. Relevant local and state level programs will also receive additional funding under the SANKALP scheme of MSDE, beyond the already allocated state incentive grants.

The workshop also deliberated on integration of skill development in the plans of Gram Panchayats ensuring last mile connectivity.

Urging the state to increase scale and standards of skill development, Dr. Mahendra Nath Pandey, Honorable Union Minister for Skill Development and Entrepreneurship said, “Our endeavor is to move away from the low skill equilibrium and contribute towards economic growth and wealth creation through skill development and entrepreneurship. This will eventually lead to increased employment prospects for the youth of the nation. The success of Skill India is dependent on the increased participation of the States and the District committees to drive demand-driven skill development in market relevant courses and prepare our youth to be industry ready.”

“There should consistent research and analysis on skill gaps at a local level, so that our strategies match the demand of the market and the aspiration of the youth. We should enable industry surveys to enable outcome-based skilling,” said Shri R K Singh, Minister of State (IC) Power and New & Renewable Energy, MOS in the Ministry of Skill Development and Entrepreneurship.

MSDE assured its support to States in keeping pace with the industry best practices by enabling upgradation of Industrial Training Institutes (ITIs) and encouraging more participation from industry giants. Initially, MSDE will focus on the top 500 ITIs, basis the grading of these institutes and will also determine surplus existing capacity for Short Term Training in ITIs. MSDE has also identified 100 industrial clusters for improved and broadening Apprenticeship training. Out of these, agreements have already been signed with eleven clusters.