The focus on good food, better health and living conditions has increased among everyone. People are beginning to invest in their health and this trend has become advantageous to the food processing industry. The Indian processing industry accounts for 32 percent of the country’s total food market and is ranked fifth in terms of production, consumption, export and expected growth.

This sector covers a wide range of sub sectors such as spices, fruits and vegetables, seafood, food grain processing, dairy and dairy products, meat and poultry, and other product groups such as chocolates, biscuits, authentic Indian food like papads, pickles and so on. Several food processing MNCs such as Kissan, Heritage, Britannia, Nestle and MTR along with the MSMEs play an augmented role in this sector.

Key facts about  India’s Food Processing Industry
India has the world’s largest population of livestock. Not just that, India is also the largest producer of buffalo meat and the second largest producer of goat meat. Poultry is a highly efficient and developed  industry in India and matches the efficiency levels of many western countries. The country is third in egg production, fifth in meat production and second in fish production in the world.The current processing levels for poultry stand at 6%, while for meat, it is 21%. Marine food processing levels in India currently stand at 23%. India produces 205 million tons of fruits and vegetables annually and is the second largest country in farm production in the world. F&V processing levels currently stand at close to 2%. India’s food grain processing sector is thriving too. India’s food and grocery market ranks 6th worldwide in terms of size. 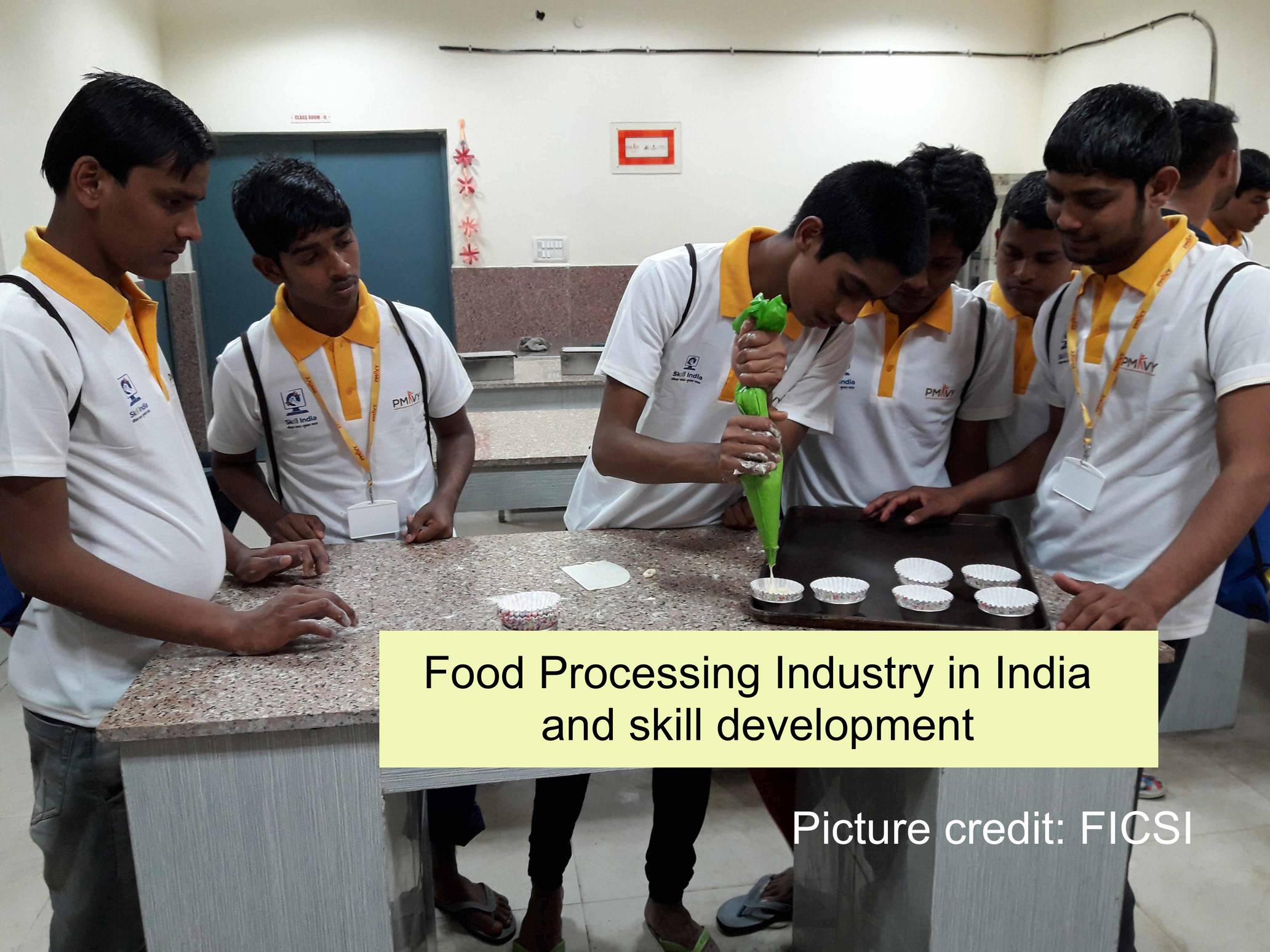 Processing Industry – Importance and Growth
As consumers are becoming more health conscious, the demand for nutritious and healthy food is ever growing. This shift to a healthier lifestyle is improving the value of several sub sectors of the food processing industry. This industry currently holds the sixth rank and is definitely looking to go far ahead the ladder. Being a relatively new sector offering great potential, India’s food processing sector is one of its sunrise industries. We are all familiar with the Make In India initiative taken up by our government to transform India into a global design and manufacturing hub. The role that this sunrise sector plays in the Make In India campaign is magnificent.


Foreign Direct Investment (FDI) in Food Processing
The food processing industry has a great potential of attracting foreign investment, thereafter creating employment. The Indian food processing sector has received about 7.54 billion USD worth of Foreign Direct Investment (FDI) between 2000 and 2017, according to data given by the Department of Industrial Policies and Promotion (DIPP). The Government of India is striving to achieve 100 percent FDI, by aiming to boost growth in the processing sector. It is providing several incentives at the central and state levels, along with laser focus on infrastructure and technology.

Government Schemes – Food Processing Industry
The introduction of schemes such as the SAMPADA Yojana are examples of how the government is taking action with regard to the food processing sector. The Pradhan Mantri Kisan SAMPADA Yojana is a new scheme for Agro – Marine Processing and Development of Agro – Processing Clusters. This scheme is a complete package, which helps in the creation of modern infrastructure and efficient equipment for agro and marine firms. Along with giving a big boost to the progress of the processing sector, this scheme is also set to provide farmers with the latest technology and consequently upping business.It is an excellent opportunity for the government to create employment especially in rural regions and thereby enhancing the exports of Indian processed foods.

Food Processing and Mini, Small and Medium Enterprises
Being a vast industry in terms of size and variety, the food processing industry fosters a startling number of small and medium enterprises. Currently, there are an estimated 42.50 million small and medium-size businesses flourishing in India, comprising of both registered and unregistered ones, making up a staggering 95% of the country’s overall industrial units. Food processing industry plays a vital role in these enterprises. The food industry has always been a great source of employment with reference to the MSMEs. The small and medium enterprises are hugely benefited from the growth of the overall sector.


Not only does the produce of the Indian Food processing sector suffice the country’s demand, it also exceeds it. This gives the industry, a fair chance to make its way to the international markets, holistically helping the country’s economy growth.

Jobs in the food processing industry