On World Youth Skills Day, the Ministry of Skill Development and Entrepreneurship (MSDE) celebrated the fourth anniversary of the Skill India Mission in the presence of many high-profile dignitaries. A clutch of big-ticket announcements and signing of MoUs to empower youth with appropriate skill training marked the day that saw several Ministers and government officials come together to show their commitment to the avowed Skill India Mission. 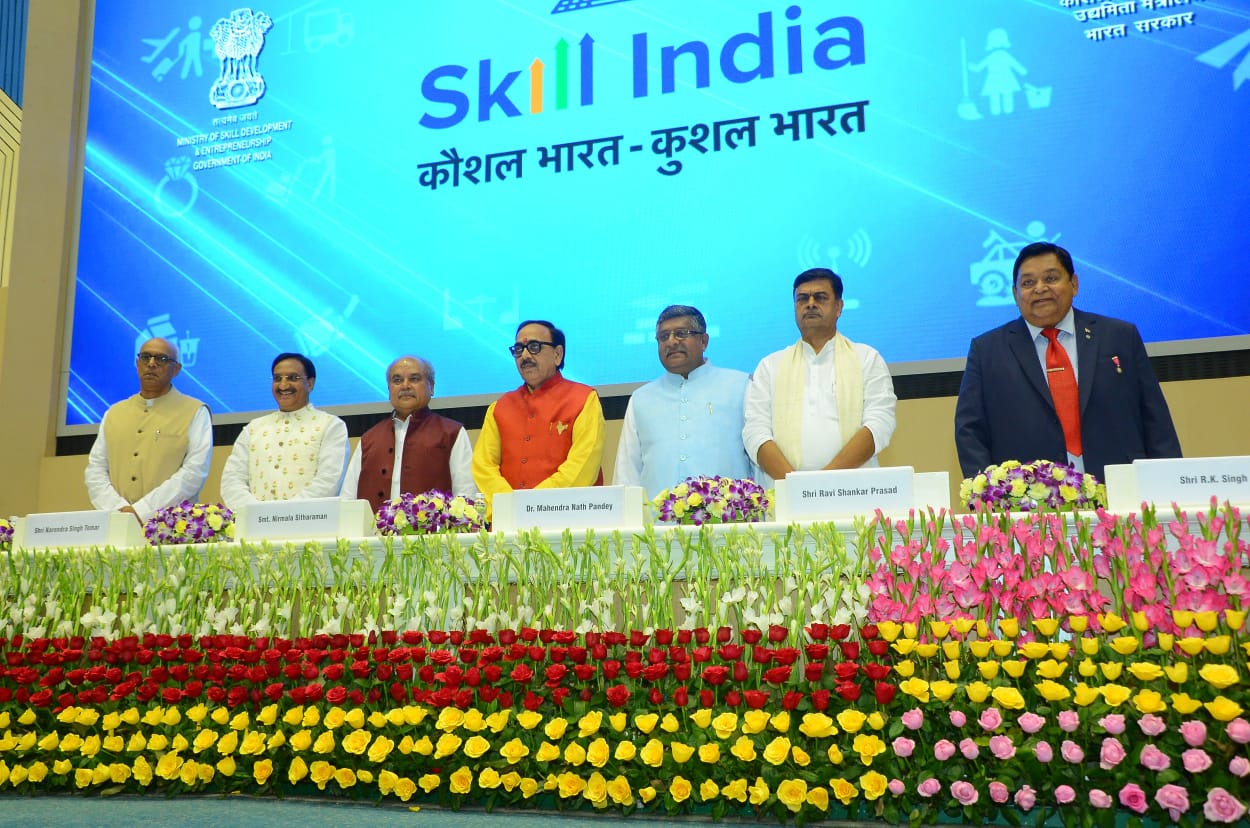 Smt. Nirmala Sitharaman, Minister of Finance & Corporate Affairs, said, the Skill India Mission has offered new avenues of livelihood to the youth of the country. Urging young people to follow their heart in pursuing their ambitions, she said, “If you want to acquire a particular skill and you are comfortable with it, you should utilise it to the fullest. Do not settle for something just because it is easy, strive for what you want, put your heart to it and you will achieve it. Earlier it was not easy to look for opportunities, but today with the help of the Ministry, the Government has created an ecosystem for training. I would urge each one of you to utilise whatever is given to you by the government.” 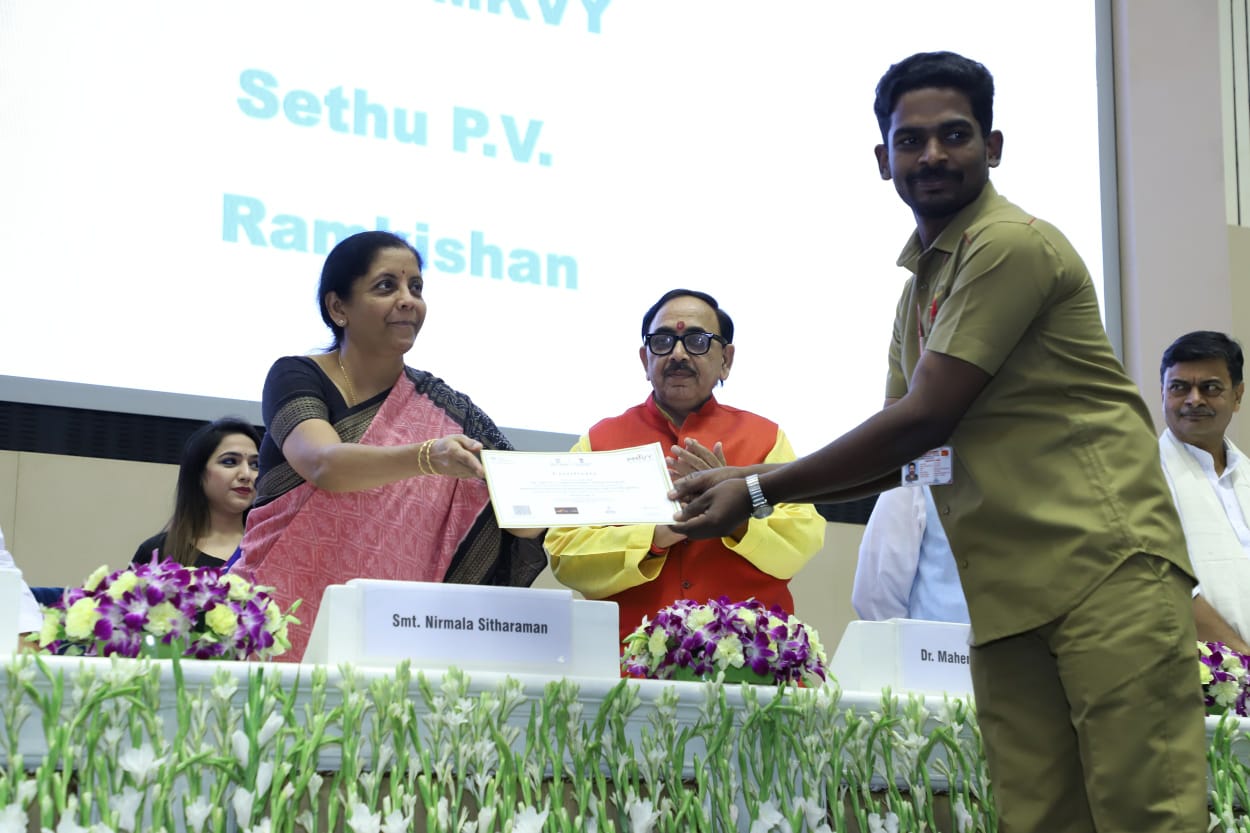 Addressing the audience and guests present at the ceremony, Dr. Mahendra Nath Pandey, Hon’ble Minister for Skill Development & Entrepreneurship, said, “On this auspicious day, I want to congratulate all who have been associated with Skill India in its four-year journey. An idea that germinated with our Hon’ble Prime Minister’s vision of a Skilled India has now reached its next phase. The foundation has already been laid. It is essential that there is seamless convergence across skill development programs, for which we seek support of all ministries, states and industries.”

He further added, “We have also announced a number of initiatives today that will engage the youth in various skills designed to cater to new avenues of employment. We have placed emphasis on promoting apprenticeship and have rationalised the stipends to increase participation in this program.”

The event saw various launches and exchange of MoUs between government agencies and the private sector. The highlight of the day was Kaushal Yuva Samwaad, an open dialogue with the youth across the country to discuss potential issues and solutions from the candidates’ perspective. The two-week consulting programme was organised on a nationwide scale to engage young job-seekers to understand their views and ideas, and identify opportunities to help the Ministry in building on existing programmes and improving overall efficiency of its projects. The recommendations received would be compiled and referred for further program implementations.

On this occasion, MSDE announced launch of Kaushal Pakhwada, a 15-day campaign from July 16, under which sessions and workshops will be conducted across the country to aspire young trainees under the Skill India Mission.

The event also witnessed introduction of 48-member contingent that will be representing India at WorldSkills International Competition, to be held from August 22 – 28 in Kazan, Russia. These young skill trainees, below 23 years, will be competing in 44-skills against their peers from 66 other countries. 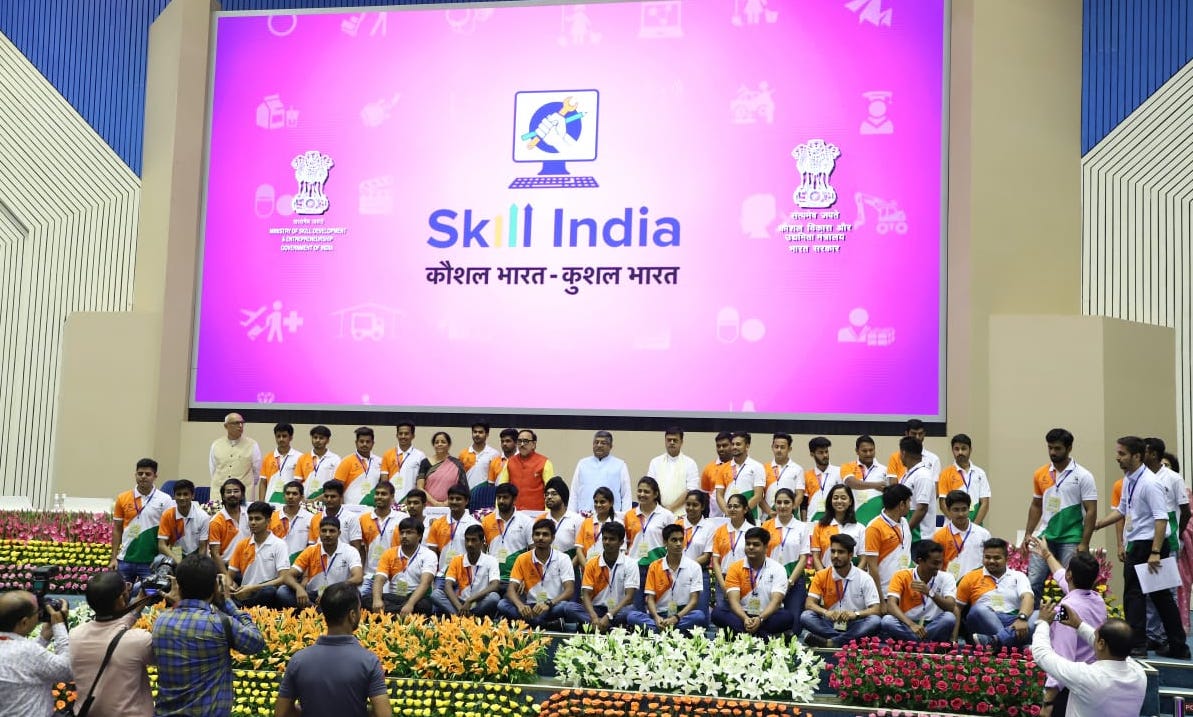 Other highlights of the day included:

Additionally, the Directorate General of Training (DGT) announced the establishment of a new Japan India Institute for Manufacturing (JIIM) in Haryana and new courses in ITIs around training on Electric Vehicles (EVs), in line with an avowed intention of the Government to work for greener energy sources.

Also present at the event Shri Ravi Shankar Prasad, Hon’ble Minister for Law and Justice, Communications, Electronics & Information Technology, said skilling has been the backbone for all initiatives and the driving force behind this are the youth of India. “The concept of Skill India has a unique interplay with other visionary schemes, including Make in India, Start-Up India, Stand Up India, Digital India. All of these will have to work in tandem for them to succeed. The Indian economy has grown manifold to become the third largest in the world now. Today, the youth of India aspires to be job-givers and not job seekers and this has given rise to the number of start-ups in the country. India has a unique demographic dividend and I urge the Hon’ble Minister of Skill Development, Dr. Mahendra Nath Pandey, to match the aspiration of the youth and the global demand.”

Shri Narendra Singh Tomar, Hon’ble Minister of Agriculture & Farmers Welfare and Minister of Rural Development, added, “Skill training has always been an integral part of the country’s culture and traditional education system. Our ITI ecosystem has been one of the most credible and long-standing network, but it is now that these institutes are being modernised through improvised curriculum, state of the art infrastructure and enhanced pedagogy to the meet the aspirations of youth, turning into preferred choices for skill training.”

Shri Ramesh Pokhriyal, Hon’ble Minister of Human Resource Development, said that India is set to become the hub of skill development in the world. “In the coming 25 years, India is the only country that will remain young, which gives us more opportunities for economic development. Apprenticeship is one of the most sustainable modules through which our youth can learn and earn at the same time. The recent reforms towards apprenticeship are commendable.”

Shri RK Singh, MoS, Ministry of Power and Ministry of New and Renewable Energy, Ministry of Skill Development and Entrepreneurship, said the day marked an important occasion to pause and reflect on the efforts towards promoting skill training in the country. He said, “It is important to celebrate milestones. This is an opportunity for us to pause and reflect on the need gaps and the roadmap ahead for Skill India. In a fast-moving economy riddled with disruptions, many have asked the question whether India will be able to address the needs of a vast population by providing them skills that will make them employable in the future? The answer is a definite yes and can be seen in the eyes of our youth who aspire to a better life.”

Dr. KP Krishnan, Secretary, Ministry of Skill Development and Entrepreneurship, who opened the ceremony by welcoming all delegates and guest, said the Ministry would focus its efforts on the informal and unorganised sector especially the small and medium enterprises.