by Brunda Murthy
in Government, News

Hon’ble Cabinet Minister for Skill Development and Entrepreneurship, Dr. Mahendra Nath Pandey met with Ambassador of Japan, H.E Mr. Kenji Hiramatsu and discussed ways to further strengthen bilateral relations between India and Japan on the skill development agenda. Proposed to bring scale and speed to the Technical Intern Training Program (TITP) increasing opportunities of training and subsequent employment for the youth of our country. India’s skilled youth is certain to play an instrumental role in supporting Japan’s economy in the years to come.

India and Japan want to increase the technical exchanges in the field of skill development. Japan has indicated that it not only wants to increase the number of its companies in India but also to teach Japanese language and civilization with technical qualities to Indian youth. 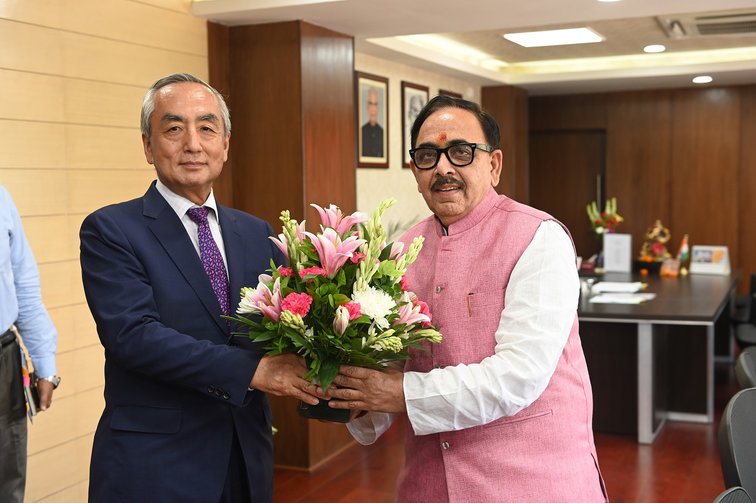 Underlining the importance of relations between India and Japan, Dr Mahendra Nath Pandey said, “Japan has always been special for India, Japan’s cooperation in the Indian system is incomparable, India has immense potential in the vast youth population through which we aim to contribute to Japan’s economy. We want to take the TITP to the highest level with the help of Japan and want that the number of trainees under it increases. This will increase the employment opportunities for the youth.”

In order to fulfil the goal of doubling the number of Japanese companies in 5 years that was set by both the prime ministers in 2014, the Ministry of Economy and Entrepreneurship of the Government of India and the Ministry of Economy, Trade and Industry of Japan Government had signed a MoU for the ten year period under the ‘Manufacturing Skills Infrastructure Promotion Program’ in which It was decided to establish the Japan-India Institute of Manufacturing (JIM).

In this institute, future shop floor leaders will be trained in Japanese style in accordance with Japanese standards. The Japanese Endowed Curriculum (JEC) was established with existing engineering colleges in India for imparting training to prospective candidates for medium management engineering in manufacturing sector. So far nine JIMs and three JECs have been started.

Apart from this, a cooperation memorandum was signed between the MSDE and the Government of Japan in October 2017 regarding the Technical Internship Training Program (TITP) to exchange technical intern trainees between the two countries by TITP, which has strengthened the international relations between the two countries. TITP is being implemented by the NSDC through the sender organizations listed in India.

In order to achieve this objective, MSDE is considering a scheme to provide technical assistance to trainees under the TITP with the help of Skill Development Fund (NSDF).