Though some of the sweet shops are slowly transforming into a corporate set-up, the majority of them remain informal businesses. Flower vendors and diya makers continue to run informal businesses that are largely unorganised, even as they contribute to a significant part of the Indian economy. To know more about their business and the challenges they face, Team NSN  visited road-side flower shops and diya sellers located at Kukatpally, Hyderabad. Though the shops do not run out of a building or a complex, they have survived with a temporary setting for more than a decade.

Would their businesses run better with support in packaging, storing and door step delivery? How do they get access to help in logistics? What are some of the challenges during seasonal demands? Do they become entrepreneurs by choice and by force? With questions such as these we met the vendors and employees.

Sourcing the flowers and diyas

“Most of the flower varieties we sell here come from Bengaluru. From there it comes to Mehdipatnam wholesale market and we buy it in bulk and get it to our shops”, says Srinivas Reddy, an employee who works in a flower shop in Kukatpally. 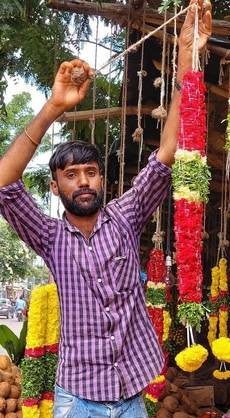 “While transporting flowers from Bengaluru most of them get spoiled on the way because of lack of cold storage transportation”, says M. Raju, an employee at a flower shop and is in this business for the past 9 years. “Due to heavy rain this year in and around Hyderabad, most of the flowers got damaged either during the transportation, in the market or at the place of its origin”, adds Raju.

Flowers are usually not expensive. But it is this perishable property of theirs, which makes the flower vendors charge more than the usual. If all the flowers are not sold on a particular day, because of lack of cold storage facilities the flowers easily decay and get spoilt.

“I do not make any of the items I sell, neither the diyas nor the idols, but I buy it from the nearby market from the diya makers and sell it”, says Bhoolakshmi, who sells diyas and idols on a cart at Kukatpally.

Sales during the festivals

The flower business is one such business in India that runs throughout the year and is not seasonal. However, during festivals like Dasara, Diwali and Telangana festivals like Bathukamma, flowers are used more than usual. 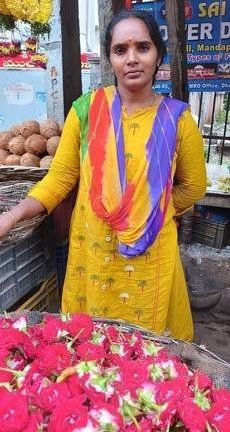 “We run our shops throughout the year. But during festivals and wedding season, our sales spike up and on the other days, we do a decent amount of business”, says Raju.

Well, diya sellers had a different story to tell. We spoke to Bhoolakshmi, who sells clay diyas and other idols which are used during Dasara and Diwali. She says, “though I sell the idols throughout the year at the same place, it is only during festivals that I make good business.”

To know about training, wages, and other challenges in running a flower business on the roadside, we met and spoke to Hemalatha, an entrepreneur who is in this business for the past 10 years. “I currently have 3 employees under me, to whom I pay ₹ 1000 per day. They make garlands, package it, and add other accessories like ribbons, beads etc”, says Hemalatha. “We usually employ people who already have the skill and talent of tying the flowers. However, we also train them in case they are new to it”, adds Hemalatha.

As the shops are located on the roadside in one of the busiest parts of the city, it is always a hurdle for them to run their shop smoothly and for public commuting in that area. A couple of flower vendors we spoke to shared that, they disappear for a week or 10 days a year after the municipal officials inspect the roads. And this is a regular phenomenon that can be witnessed every year.