The journey of transforming the lives of people through a grassroots level social intervention is filled with numerous hurdles. It’s a difficult choice that is taken by very few people. Shruti Venkatesan, Pooja Chopra and Yash Warrier, the founding team of Khwaab Welfare Trust, belong to that category of people. They took the bold decision of overcoming personal and professional challenges to financially and socially empower the unskilled women who were otherwise confined within the four walls of their homes.

Khwaab Welfare Trust was established in 2014 while the founding team was working with Teach For India (TFI) as Fellows in Mandawali and Pandav Nagar communities of Delhi. During their tenure at TFI, they interacted with more than 200 women to understand their family backgrounds and vision for their children. Majority of the women didn’t have ambitious plans for their children, especially their girls, as they had become accustomed to the various societal norms. They were 100% financially dependent on the male members of their family which made them feel more under confident and inadequate. 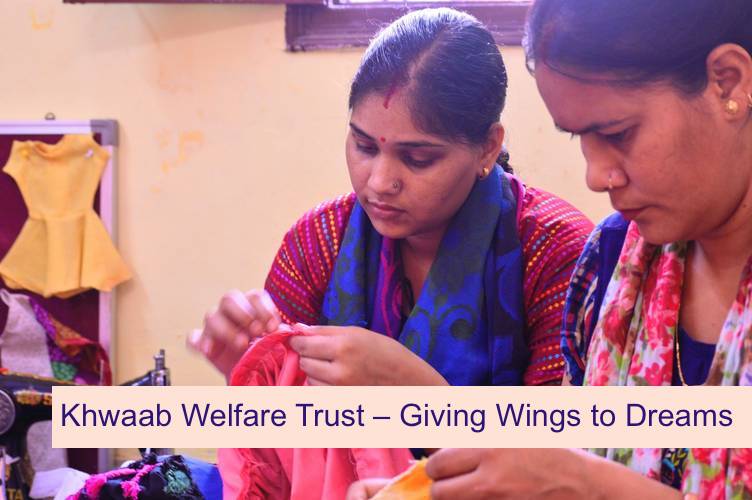 Witnessing the depth of this problem made the founding team realize that lack of knowledge, skill and employment is deterring many women from becoming an active and equitable decision maker in their families. Hence, they decided to challenge the status quo by encouraging the unskilled and unemployed women of Mandawali to step out of their homes and come to a common community space to learn livelihood skills such as tailoring. The program started with 10 women coming on board. “The women unanimously decided to learn tailoring as it was the most preferred and popular skill in Mandawali. We were thrilled when we got to know about their final decision because these women were ready to make a brave decision of challenging the societal norms to gain a livelihood skill”, recalls Pooja.

With the aim to make the program highly contextual, the founding team decided to leverage the community’s talent pool by identifying two tailoring trainers from Mandawali itself. The girls were not allowed by their family to go outside the community for work even though they had completed a diploma in tailoring. Both the girls were extremely bright and interested to work with Khwaab. So, the team convinced the girls’ families and assigned them the huge responsibility of training the first batch of women at Khwaab in the field of tailoring. Currently, the skill development program builds tailoring skills in women through the two courses of basic and advanced level tailoring. Three trainers, who’ve been trained by Usha Sewing School, currently conduct three batches at Khwaab and deliver high quality training using an industry standard curriculum. Once the students complete the training, they are connected to employment opportunities within and outside Khwaab on the basis of their performance during the training.

Evolution and growth as a social enterprise 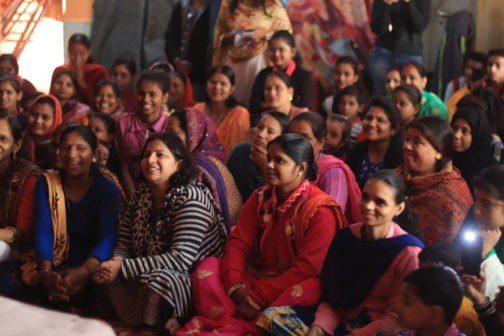 Even though Khwaab’s journey started with a skill development program, their program has evolved over the years. 6 months into their work, the founding team realized that for the women to convert their skills into income, they need access to localized livelihood options. So, the team started exploring and ideating with the women about the kind of products they can make with their products. This creative process led to the women designing and creating a beautiful range of handcrafted products under the ‘Livelihood project’ that captured the various art-forms of India. Their product portfolio has evolved too with just one category in 2015 to now there being 4 different categories of stationery, knit wear, accessories and home décor items.

Soon after launching the livelihood project, the team realized the need for a strong intervention for building women’s capacity to make informed choices through the tool of knowledge. To implement this idea, Khwaab started its third program of ‘Awareness’ under which initially it got numerous partner organizations on board to conduct workshops on education, health, sanitation and financial management. To make this project even more sustainable, in the year 2018-19, the team trained 10 women of Mandawali as ‘Salahkars’ who trained women in Mandawali through weekly workshops on banking, savings, budget diary, etc.

Today, Khwaab Welfare Trust has impacted 230 women through their knowledge program on financial planning and literacy, 85 women have been skilled, and 22 women have been absorbed by the Trust as artisans making handcrafted products.

Four years ago, the women were shy to step out of their house. Today, they are fearless and have the courage to voice their opinions. They can travel alone, go to a government hospital to get themselves and their children treated and are not dependent on their husbands for basic financial needs anymore. The skills have enabled them in exercising their decision-making ability and authority at a household level. “The fact that many husbands have accepted their work and are encouraging them to work makes us feel really happy and proud of our work. They are realizing that their family will grow better and faster if both parents contribute to financial and social matters”.

Khwaab Welfare Trust has made significant impact in the lives of several women. To make this happen, many well-wishers have supported the founding team throughout their entrepreneurial journey. One of the key stakeholders who’ve contributed a lot to the entrepreneurs’ journeys is UnLtd India who’ve played a crucial role in developing their idea in a focused manner through a holistic support system. They have provided financial as well as non-financial support in the form of leadership training, technical assistance and connections with their dynamic network.