Life Sciences Sector Skill Development Council (LSSSDC) was set up in 2014 to address the challenges and complexities of creating skilled human resources in the pharmaceutical industry. Over the years, LSSSDC has positively impacted the evolving skilling ecosystem through many initiatives. We’ve captured the Skill Story of LSSSDC through a conversation with Mr. Ranjit Madan ,CEO, LSSSDC. Read on to know more …

Under the leadership of Dr. Satish Reddy, who is also the chairman of Dr Reddy’s Labs, we have evolved as an apex body for skill development in Life Sciences. LSSSDC focuses on manufacturing of Pharmaceuticals, Bio-pharma and Contract Research. It covers the wide spectrum from drug research up to the point where the drug information is shared with the doctors and clinics. We started by conducting a skill gap study with he help of KPMG. The study revealed very interestingly, there are over 240 distinctive job roles in the various verticals, but it’s a very skewed distribution where only 20 jobs out of 240 which is like less than 10% of job roles, making up for almost 70 % of the job volume (estimated 8,50, 000) of the sector.

Can you share more details about industry alignment and various initiatives from LSSSDC?

We set up standards which are known as Qualification Packs (QPs) with the help of industry for the top 60 job roles ( taking up over 90% of total job volume in the sector) and then we’ve been focusing on top 20 job roles. For these 20 job roles we’ve developed with industry inputs, not only sets the standards but also curriculum and the content that must be followed by the accredited training partners.

We also conduct Training of Trainers (ToT) program so that the selected trainers can adapt to speed in terms of requirements and also be certified to take specific job roles. We also organise the assessments and facilitate the placement of these candidates. Here again Industry has been involved in providing Master Trainers, validating Question Banks for assessments, thus enriching the quality of skilling. Apart from skilling and facilitating placements another key activity that we focus on is ‘Recognition of Prior Learning (RPL)’ programs which is aimed at assessment and certification of existing workforce. Finally and more lately, another key focus has been to catalyse apprenticeships.

In the current year we expect to do 16,000 plus assessments in various job roles; half of these jobs are at basic school leaving level where candidates are trained under PMKVY. The rest are fees based at college level. Its therefore a balanced blend of PMKVY and fees based. We also expect to catalyse 5000 apprenticeships and facilitate placement of around 8000 in various job roles. And, we are targeting some 30000 numbers under the RPL. It is a relatively low volume sector which has a current employment of 850000. However, it is growing quite rapidly, at double digit rates, and amongst the 5 top priority sectors as put out by NITI Aayog!

The industry has been very actively involved with us in the key initiatives namely RPL, in apprenticeship, in skilling, and in final hiring. A number of organisations have also aligned their in house skilling to the framework laid down by the Council: Dr Reddy’s, Cadila, Microlabs, Wockhardt, Hetero Pharma and a growing numbers are now engaged with us as Training Partners—Microlabs, Cadila, Granules etc 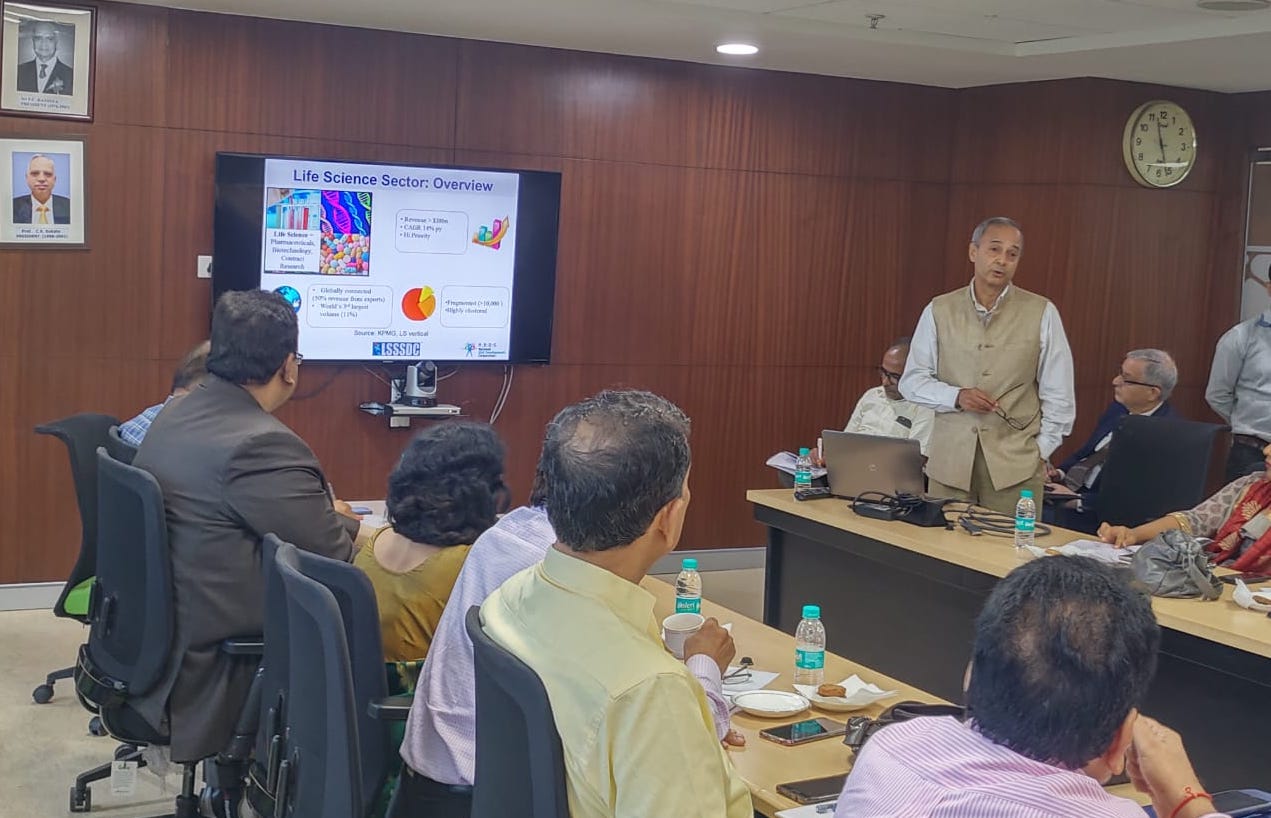 Tell us more about the nature of jobs in Life Sciences Sector and how LSSSDC is parterning with organizations to make training demand-driven.

In the Life Sciences sector, about 70% of the volume comes from about 20 job roles. Half of them are at school level and the other half at the college or under graduate level. The jobs are created in various verticals like quality control, manufacturing, and also some of them are from supply chain. The high-end jobs are relatively small in percentage although the number of aspirants for these kind of jobs is of a very high order. So there has been a clear supply demand miss-match for a number of years. The role we play here is to gradually align the supply and demand in the industry.

We work with the Department of Biotechnology, Department of Pharmaceuticals, Ministry of Health, office of Drug Controller General of India (DCGI), Ministry of Science and Technology and with various academia. And now we’ve have started our initiatives with Pharmacy Council of India (PCI). PCI expects to embed our skilling modules in final year of various Pharma courses (D. Pharma, B. Pharma, M. Pharma) with scores to count towards final score of candidate. This with a view to enhancing skill sets of candidates making them more Industry ready. As part of this. Pharmacy students will also be encouraged to take up apprenticeships. Then they will have the perfect blend of classroom-job oriented training with the practical aspect of training through apprenticeship. Through this, we will be bringing industry-academia closer together.

How is LSSDC making use of technology in training?

Let’s look at how we’ve addressed one of the challenges through technology. Many job roles that are high-capex, come under the purview of manufacturing. So we have Manufacturing Chemist, or the Production Chemist which are at the graduate level. We have Machine Operator which is at the schooling level. We found it very difficult to skill them in these job-roles. No training partners could afford the high capex job roles as these require installation of expensive machines. The other option was to train them on the shop floor but, there are many regulations (eg USFDA, EU) that prevent people who are not on the payroll being on the shop floor. So, skilling people in these was a huge challenge and then we are the first to successfully launch a Virtual Reality Simulation based skilling module The first of these are inaugurated in March 2018 in Hyderabad by Hon’ble Vice President Sri Venkiah Naidu. Since then a number of other VR based labs have been established in other major clusters of LS activity. A number of reputed Pharma companies have also started to show interest in using this mode of skilling.

What are your observations about implementing apprenticeships in the Life Sciences sector?

There is a lot to do to create a culture of apprenticeships in India. So, the Sector Skill Councils should try and help in catalysing the movement. In the last quarter, we triggered almost 2000 apprenticeships in 50 organisations. This year we are expecting the numbers to increase and reach 5000. In the context of our sector, the increase in number is definitely a positive sign. To get this underway, we have organised a number of workshops, also involving NSDC and the various Associations on our Governing Body, followed by one on one meetings with various corporates.

An indicator of success, is IPA which has top 22 companies in the pharma sector, with now 17 of them are participating with us in leading initiatives of apprenticeship and RPL. That’s a clear indication of acceptance of our standards, assessment and certifications.

What is your message to youth who wish to join this industry?

The younger generation should know the difference between education and skilling. Only the certificate or the degree is not going to make them job-ready. They need both educations and a combination of technical and soft skills to be productive and contribute effectively! Hence, more emphasis should be given to skilling.

India is touted to be Pharmacy of the world, exporting to over 240 countries, with one out of every 3 tablets and vaccines to children sold globally are being Made in India. When it comes to working in the Life Sciences industry, what can be more satisfying to work closely with such a sector which saves human lives, across the globe