by Shivani Muralikrishna
in Events, Government

The skilling ecosystem in Madhya Pradesh is soon going to transform with the proposal to set up world-class ITIs. At an event held in Bhopal on 11th May 2017, Shri Rajiv Pratap Rudy, Union Minister of State for Skill Development & Entrepreneurship (Independent Charge), announced various schemes to scale up youth skilling programs and bring them on fast-track. He flagged off the “Rozgar ki Padhai – Chalo ITI Campaign’ for the youth of Madhya Pradesh, along with the Hon’ble Chief Minister of State, Shri Shivraj Singh Chouhan.

The campaign was launched across all districts of Madhya Pradesh launched and will be delivered in four phases commencing from today. The focus would be to make the children in schools familiar with skills ecosystem and undertake workshops and also engage government officials to visit schools promoting the value of skills and the schemes available to enrol. The campaign was launched in 25 trades for 1441 seats and 1135 trainees.

Highlights of the schemes

Speaking on the occasion, Shri Rajiv Pratap Rudy said, “In our endeavour to work in conjunction with the State to create world class ITIs in Madhya Pradesh, we have allocated a total budget of Rs. 10 Cr. (Including State share of 30%) for the development of ITIs in Bhopal. If India has been known for its IITs till now, it would now be known for its IITs as well.”

“We eventually plan to extend distance learning to all ITIs in the country, which has potential to benefit around 14 lakh students, attending courses in different fields,” he further added. 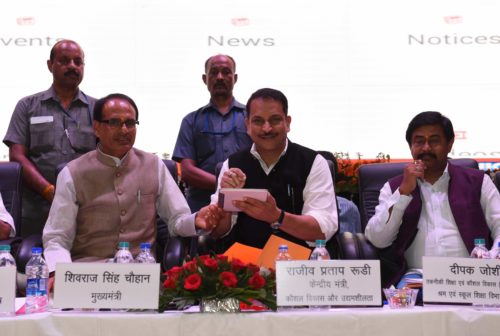 This up-gradation of 400 ITIs in 34 States/UTs, apart from building its infrastructure, will also focus on enhancement of knowledge and skills of ITI instructors, strengthening facilities in 14 central institutes along with curriculum development, reforms and capacity building. These upgraded Model ITIs will be evolved as an institution showcasing best practices, efficient and high quality training delivery and sustainable and effective industry relationship.

Later in the day, Shri Rudy also took a meeting with senior officials across government departments and emphasised on the need for bringing in convergence across schemes and initiatives in skill development in the State. He said, “Only a joint cohesive approach will give us the desired impact we want to see in the youth of our country. As our Prime Minister states, it is imperative that we undertake reforms to bring about the desired transformation we want to see in our society.”

(This article is based on a press release from the Ministry of Skill Development.)