by Meghana Lanka
in Events, News

The Skill Development and Placement Fair saw participation from

The event was concluded with the Skill March flagged off by the Governor of the state. More than 450 youth walked together with banners and placards to raise awareness about Skill Development in the state.

One of the key highlight of the event included the certification of 15 surrendered militants by JCRE Skill Solutions under the first phase of Pradhan Mantri Kaushal Vikas Yojana (PMKVY) with support from Home Department, Government of Manipur. These former militants completed the training of ‘Distribution Linemen’ under Power Sector Skill Council and received a certificate from the Governor and Chief Minister of Manipur. Also the first batch of candidates trained under RPL (Recognition of Prior Learning) component of PMKVY were certified by Chanu Creations and Industree under Textile Sector Skill Council. 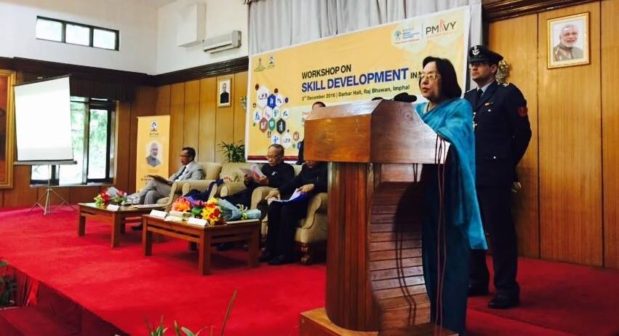 The event urged the need of active participation of the state government to promote skill development amongst the youth in Manipur, where more than 7 lakh candidates are registered with employment exchange as unemployed.

Update on PMKVY from Manipur

Till date, more than 3000 candidates have been trained in both fee based model and phase 1 of PMKVY. Under phase 2 of PMKVY, trainings are underway at JCRE Skill Solutions and Manipal City and Guilds in Beauty & Wellness, Apparel, Power and Tourism & Hospitality sector.

Under the special initiative of MSDE, multi-skill Pradhan Mantri Kaushal Kendra (PMKK) centers are also being set up by Don Bosco Tech (Tamenglong & Senapati district) and Rooman Technologies (Imphal West and Thoubal District). NSDC training partner, JCRE is instrumental in mainstreaming surrendered insurgents through skill development initiatives and has trained 30 people for the job role of Distributor Linesman in the power sector. Out of these, 15 candidates were certified during the event.

Under phase 2 of PMKVY, more than 95,000 candidates will be trained and certified over the next four years (state and center combined) including 7,000 certifications under RPL.

(This article is based on a Press Release from MSDE, Government of India)

Skill Training: Quality is the key for sustainability

Skill Training: Quality is the key for sustainability

Meet this NTTF B.Voc alumnus who embarked on a successful entrepreneurial journey

How Intercell is pioneering mentoring through a virtual platform