by Brunda Murthy
in Industry, News
0

Media and Entertainment Skills Council (MESC) caters to skilling needs of several segments of the industry through various short-term and long-term skill-based training programs. MESC closely works with training academies in this sector to implement NSQF compliant courses. One of the areas currently being explored by MESC pertains to VFX and the opportunity to skill the youth and make them employable. In this connection, on 18th July 2017, Mr Mohit Soni, COO, MESC met the creators and directors of cinematic magnum opus Baahubali and discussed scope for training in VFX and related skills.

Ask anyone associated with the “Baahubali”  why they chose to work on the film, and their answer is likely to be “because of S. S. Rajamouli.” The 43-year-old director and his conviction in the story is what convinced producers Shobu Yarlagadda and Prasad Devineni to back a $67 million film. Bollywood producer Karan Johar called Rajamouli a “global film-maker” in the league of James Cameron and Christopher Nolan.

Media and Entertainment Skills Council, COO Mr. Mohit Soni met Mr. S.S. Rajamouli in Hyderabad on 18th July 2017 and discussed his experience and vision about the most successful movie in the Indian Cinema “Baahubali”. What he had to say regarding the Movie, his ideas and the Industry is surprisingly distinct. During the interaction, Mr. S.S. Rajamouli disclosed his notion for Baahubali’s opulence. Apart from this, he also mentioned how VFX industry is growing at an exponential rate. 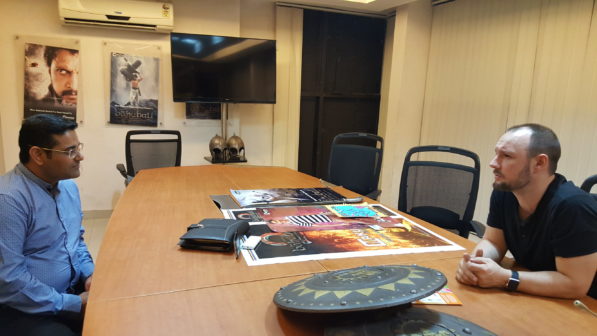 Mr. Soni also interacted with MAKUTA VFX CEO, Pete Draper (the primary VFX team of Baahubali) who had a lot of words of wisdom for the accuracy of VFX industry. Pete mentioned about his team and how Makuta employs people who take VFX as their passion.

Media and Entertainment Skills Council is making an impact in the World with visionary geniuses by understanding their mindset when it comes to such gigantic stories. Mr. Mohit Soni is conceptualizing things to inspire the youth who tend to be a part of M&E sector.

Prior to that 17th July 2017 on Monday, the meeting with Mr.Shobu Yarlagadda, Mr. Prasad Devineni (Producers of Baahubali) and the Ultimate Star, Rana Daggubatti have been truly entertaining. The Producers and the actor shared their experience about how they were influenced by the story line of the concept and what made them invest on the Biggest Blockbuster Baahubali. Such an appealing story of true success. Full Coverage coming soon on “Media Talk Back.”