Dr Mahendra Nath Pandey conferred the National Entrepreneurship Awards 2019 to Enterprises and Ecosystem builders on 9th November 2019. The fourth edition of the award ceremony was organized today to mark the completion of 5 years of setting up of the Ministry of Skill Development and Entrepreneurship (MSDE) in 2014.

The awards aim to recognize and honour the outstanding young First-Generation Entrepreneurs, and Ecosystem builders for their outstanding contribution in entrepreneurship development and providing support to the entrepreneurs. It seeks to instill and entrench the entrepreneurial attitude among the future generations and the Youth of India.

For the awards, 6098 applications were received online, which were checked for completeness and correctness. The 4134 eligible applications then underwent field assessment and regional online evaluation, which was undertaken by 12 partner institutes, spread across the country. National Jury, chaired by Dr R A Mashelkar and comprising of experts from industry, academics and business then selected the final winners. There were three categories of competition for entrepreneurs- A1 category for initial investments upto Rs 1 lakh, A2 category for initial investments between Rs 1 lakh to Rs 10 Lakh, and A3 category for initial investment between Rs 10 lakh to Rs 1 crore. Various sectors were selected for the awards, and there were 4 special categories including Women Entrepreneur, Entrepreneur from SC/ST Category, Entrepreneur from People with Disability category, Entrepreneur from difficult areas. Award Winners received a Trophy, Certificate and a Cash Prize of ₹5 lakh (enterprises/ individuals) and ₹10 lakh (organizations/ institutes). 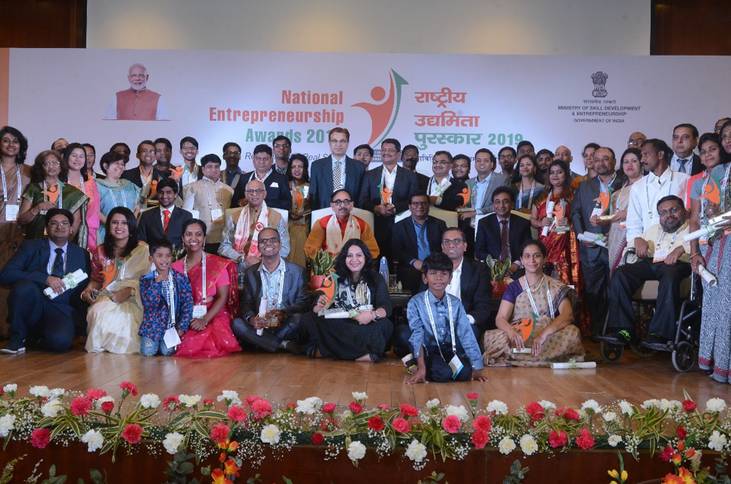 Congratulating the winners, Dr Mahendra Nath Pandey said that the awardees reflect the new and emerging India, which is confident and moving ahead. He said that it is heartening to note that people from different parts of the country have participated in the competition and won the awards. The Prime Minister’s vision of better skilled workforce in the country is being implemented by the Ministry of Skill Development and Entrepreneurship in an effective manner. Skilled workforce will fulfill the country’s aspiration to become the $5 trillion in near-future, and improving the rank in Ease of doing business.

He said that the Government has launched a number of schemes like Skill India, Digital India to support the young, enterprising and aspiring India. The Minister said that the Self-help groups in the countryside have not only improved the financial health of the people, but also helped in checking various social evils. Assuring the entrepreneurs of the country full support of the Ministry in their endeavors, Dr Pandey called upon them to exchange their experiences among themselves and inspire more people to start their own enterprises.

Speaking on the occasion, Secretary Skill Development and Entrepreneurship Dr K.P.Krishnan said that within four years, the number of complete applications for the awards has gone up by 10-fold, showing increasing spirit of entrepreneurship among the people of India. He said that these awards are different from those being given by the private sector, as they recognize the people rooted in real India, who have come up through struggle and hardwork. He highlighted the fact that people from towns and smaller cities have participated whole-heartedly in the competition, and largest number of applicants were in the Agriculture category.