Maharashtra State Rural Livelihood Mission (MSRLM) paid a tribute to Late Shri Pandit Deen Dayal Upadhayaya on the occasion of Antyodaya Diwas on 25th September 2018 by honouring skilled professionals, with the theme of Bharat k Kaushalzade. The programs were based successful implementation of  Deen Dayal Upadhayaya Grameen Kaushal Yojana (DDU-GKY) from Ministry of Rural Development, GoI and Rural Self Employment Training Institutes (RESTI). DDU-GKY has been instrumental in training and employment of rural youth for better livelihoods. 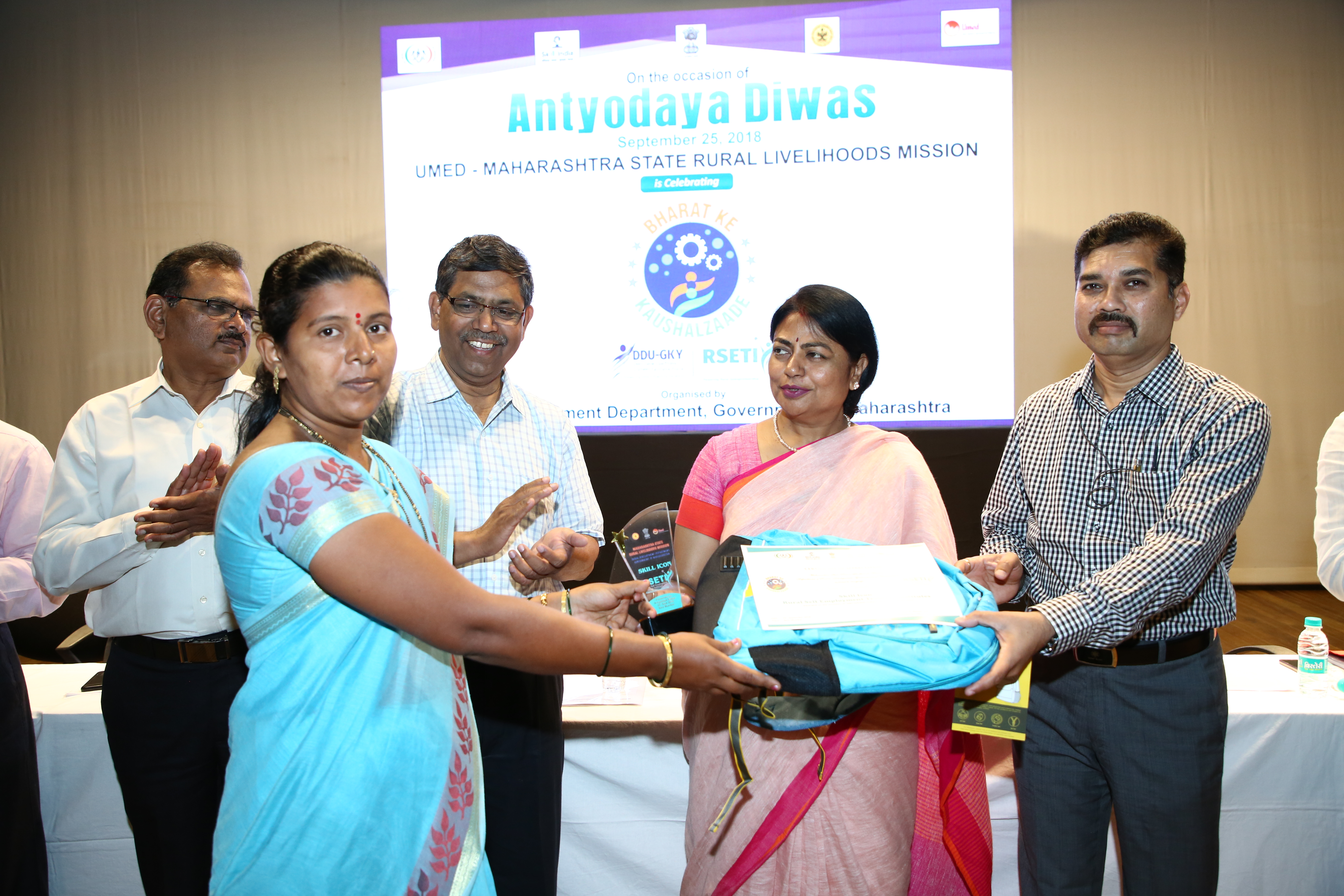 While addressing the house, Ms R. Vimala -CEO, MSRLM appreciated the efforts made by all the stakeholders at all the levels. She mentioned about how Maharashtra secured 2nd position in RESTIs and 4th in DDU-GKY at national level with the support from all the districts and implementing institutions/ agencies. She further coveted to top the charts at national level in both the programmes run by MSRLM under the guidance of MoRD. Her words were joined by Hon. COO MSRLM – Shri Ravindra Shinde and State Director RESTI – Shri Sunil Kasture. Mr. Shinde mentioned that how Mobilization is the key to these programmes and how districts a vital role in its success. Mr. Kasture also added on how RESTIs have been helpful in fulfilling the dream of the youth who are aspiring to become entrepreneur.

On the occasion of Antyodaya Diwas MSRLM felicitates PIAs, employers and successful candidates 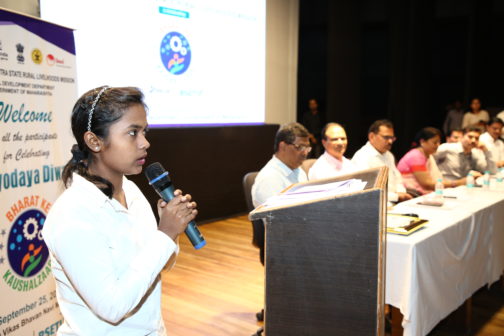 In case of DDU-GKY, top 3 best performing PIA’s are selected on the basis of total target allotted vs. trained candidates against it, trained vs. placed candidates, over all training quality, infrastructure, placement retention a number of alerts received. First in the list is Dhatri Foundation for its commendable performance. This PIA has completed its total target in first 6 month of project sanction and is also awarded additional target in the state. Dhatri foundation has provided training mostly to female candidates going beyond the minimum criteria and have still retained them on Job. Second on the list is Focus Educare who completed the project in 1 years’ time and has been awarded additional target with one more fresh project based on team capabilities and infrastructural strengths. Third place is secured by Shri Technologies based on training completion, getting additional target and maximum placement percentage among other PIAs. 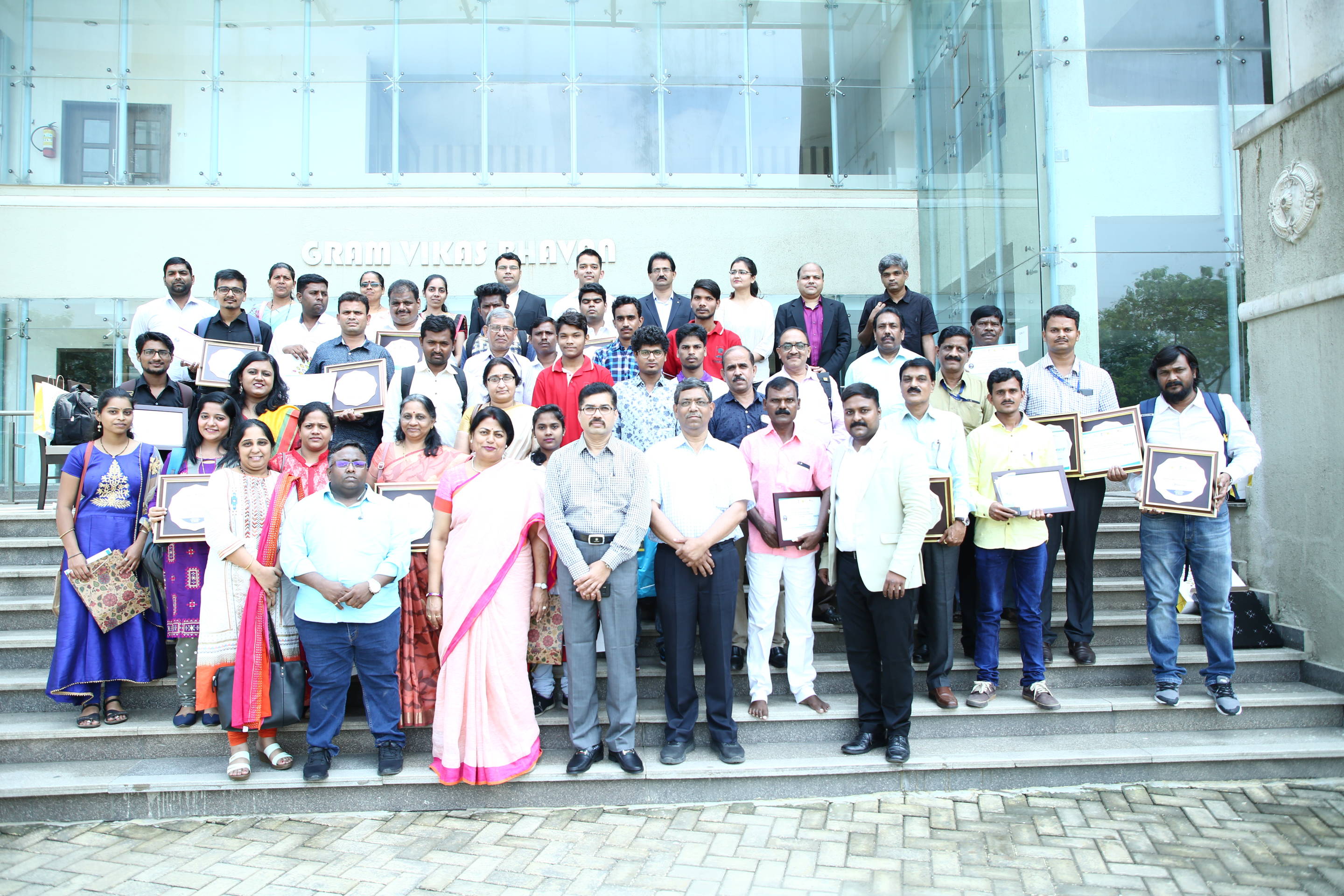 Best District are shortlisted on the basis total target sanction to the district and achievement against it, also how many candidates are placed against it. Top five districts who received best performing district awards are PD-DRDA of Nanded from where Maharashtra has got highest number of candidates under DDU-GKY followed by Yavatmal, Gondia, Nagpur and Nasik.

MSRLM has also rewarded best employer has been selected on the basis of maximum salary given by the employer and no of candidates working from last 9 months. Kochar has recruited 165 candidates with the average salary of 12000 p.m. followed by Aegis global who has employed 121 candidates with the average salary of 10437 and third is D-Mart where more than 90 candidates are working right now. We have also felicitated best districts RESTIs on the basis of training achievement, credit linkage and overall settlement and Project Directors for mobilization of BPL candidates MSRLM has also distribute awards to skill icons from DDU-GKY and RSETIs programme.