NSN Connect 2022 is back with a new series titled “Corporate Social Responsibility (CSR) in India: The Big Picture.” Ms. Meena Ragunathan, a CSR Specialist, is the eminent guest of the six-episode series. She is an expert in the Development Sector and has decades of experience in setting up and leading Corporate Social Responsibility (CSR) departments for big organizations and has recently authored a book on CSR – ‘Doing Good: Navigating the CSR Maze In India’.

With the addition of Section 135 to the Corporations Act of 2013, India became the first nation to have CSR for specific companies enshrined in law. The goal of CSR law was to make companies responsible and equal participants in the development process. The concept of corporate social responsibility (CSR) holds that companies should examine how their actions might affect the environment and society.

Each individual stakeholder, however, has a slightly different understanding of how CSR fits into the larger discussions about the moral, ethical, and social responsibilities of industry.

The first episode in the series focuses on CSR- the history and evolution of mandatory law in India. Here are some of the highlights from the episode. To watch the full episode, please visit our YouTube channel.

In the first episode, Ms. Meena Ragunathan, talks about the history and evolution of CSR as a mandatory law in India, the benefits of CSR for companies, understanding the connection between ‘doing good’ and ‘being good’ and the emerging CSR ecosystem in India.

In the first episode, our guest spoke about how Corporate Social Responsibility (CSR) is not a new concept and how it keeps changing as there is no widely acknowledged definition of CSR. Many, including academics and stakeholders, have their version of CSR, to incorporate CSR into skilling and education, and other CSR initiatives. Referring to the book ‘Doing Good: Navigating the CSR Maze in India’ into a larger framework and learning about the historical perspective and value of CSR, as well as how CSR was made mandatory by law in the country.

CSR has been a topic of discussion for centuries, and in India, all of the major business groups have made some kind of contribution to social development during the past two centuries. There is a long history, and our history has also shown that businesses made significant contributions to the independence movement. Example: The development of institutions like the Tata Institute of Fundamental Research or the Birla Institutes, all of which were funded by companies.

Following independence, the focus shifted to the public sector, which is well known for its importance in CSR. There were several successful business houses throughout the 1970s and 1980s. In India, however, there is also a great deal of societal mistrust of the private sector as a result of liberalization, and this was an area where human development was not really progressing all that well. 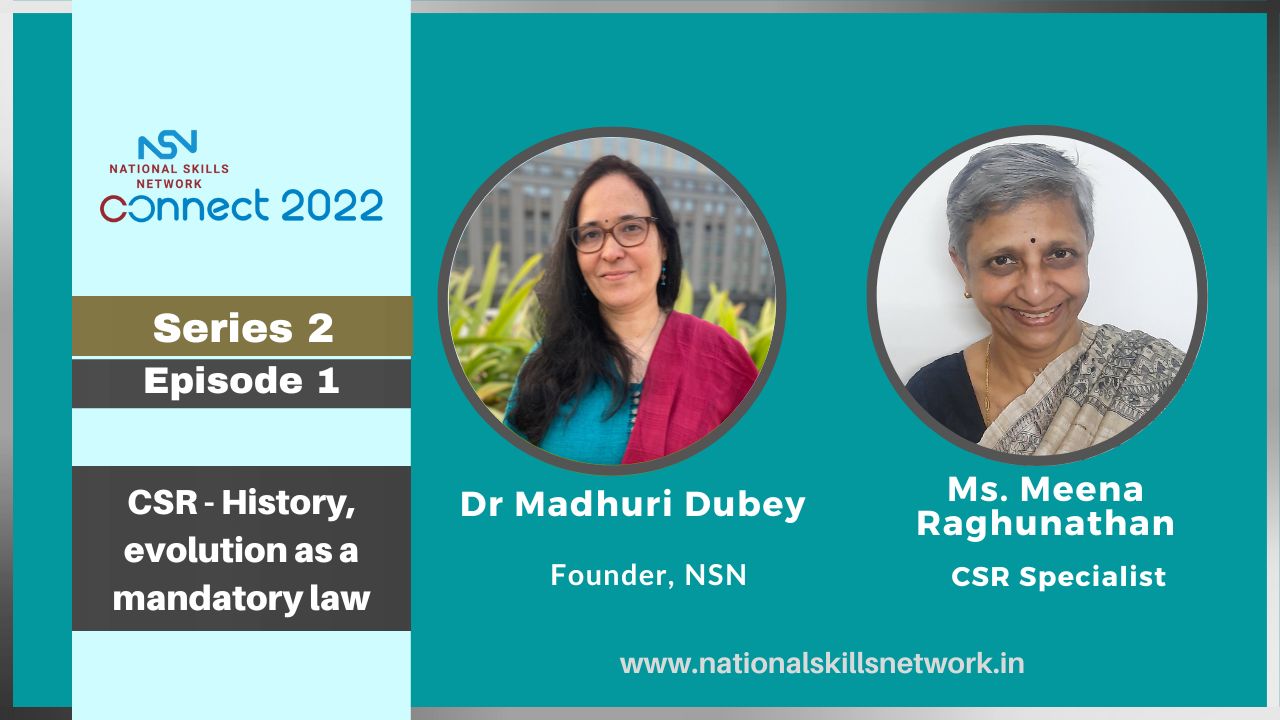 Initially, there were national guidelines and voluntary CSR guidelines. However, starting in 2009/2010, while the Companies Act was being mandated, it eventually became law that all large companies had to engage in CSR. The law required that 2% of profits be allocated to CSR. It was passed in 2013 and came into effect on April 1st, 2014.

India is the first major country to introduce laws stating that you must spend a certain amount on CSR and spend it in a certain manner. Companies were taken aback since they did not expect it; they expected it would be more of an inducement to spend, and it began as “comply or explain.”

Spending money on society is doing good, but the most important question is: How are you making that money? It is not about how you spend that money, although that is also important. Whether the companies have a 360-degree stakeholder perspective when making business decisions and whether the companies care about communities, the environment, governance, and internalizing these concerns.

The book ‘Doing Good: Navigating the CSR Maze In India’ explains the topics which help the ecosystem such as: What is CSR and how you should look at it? How companies are attempting to promote business, responsibility, and goodness and how does CSR fit into this picture? The book explains all of these terms because looking at CSR alone misses the perspective. The book goes into the specifics of the law, so hopefully, that will help people within the company’s foundation to understand how it should be implemented and see what the responsibilities at the board level are at the CSR committee level, CEO level, and at people level who are implementing CSR and how to make sure that you tick all the right boxes.