Few years back, while studying in a Pune Municipal School in class 9th, little did Vaishnavi know that by the time she completes her 12th grade, she will be trained in operating a complicated CNC machine! But she is not alone, there are thousands of girls like her who are entering into jobs and careers which earlier could only be imagined “suitable” for men.

An Internship initiative by Lend A Hand India!!

While in last one decade India has seen an upward trend in the enrolment rate of girls, the participation of women in the workforce continue to be very less

Despite many government initiatives  to promote girls’ education in our country, such as “Beti Bachao Beti Padhao Scheme, ‘Sukanya Samriddhi Yojana’, the skill domain still has very few opportunities to offer to women. For last so many years, skill programs for girls merely mean stitching and beautician courses which not only reinforces gender stereotypes but also undermines their true potential.

Lend A Hand India, through its vocational education programs is offering opportunities to young girls to enter into new and unconventional skill domains.

Lend A Hand India’s focus is to prepare adolescents and young adults for sustainable livelihoods via an integrated approach of embedding skill education into existing mainstream education systems at a pan-India level. It is imparting skill education to students during grades 9-12  and equipping them with valuable work skills throughout the high school years as an integral part of the school curriculum. Students are also placed as interns with small or micro enterprise to help them gain real life exposure to the “World of Work”.

This program has especially impacted young girl who face multiple challenges like managing household chores, sibling care, early marriage, are not encouraged to work and thus the aspirations regarding their education is very low.

In last two years, in Maharashtra and Delhi, out of the total students enrolled in Multi Skill Foundation Course, 64% are girls who have successfully completed their internships in non-traditional trades such as Fabrication, Electrical, Automobile etc.

Below are the stories of two such girls…

Not an Engineer but better than them

Vaishnavi’s journey with Lend A Hand India started in class 9th where she was offered  to choose between a theory subject or the “Multi Skill Foundation Course” which offered practical and hands on learning of modules such as basic engineering, energy and environment, home and health gardening, nursery techniques. 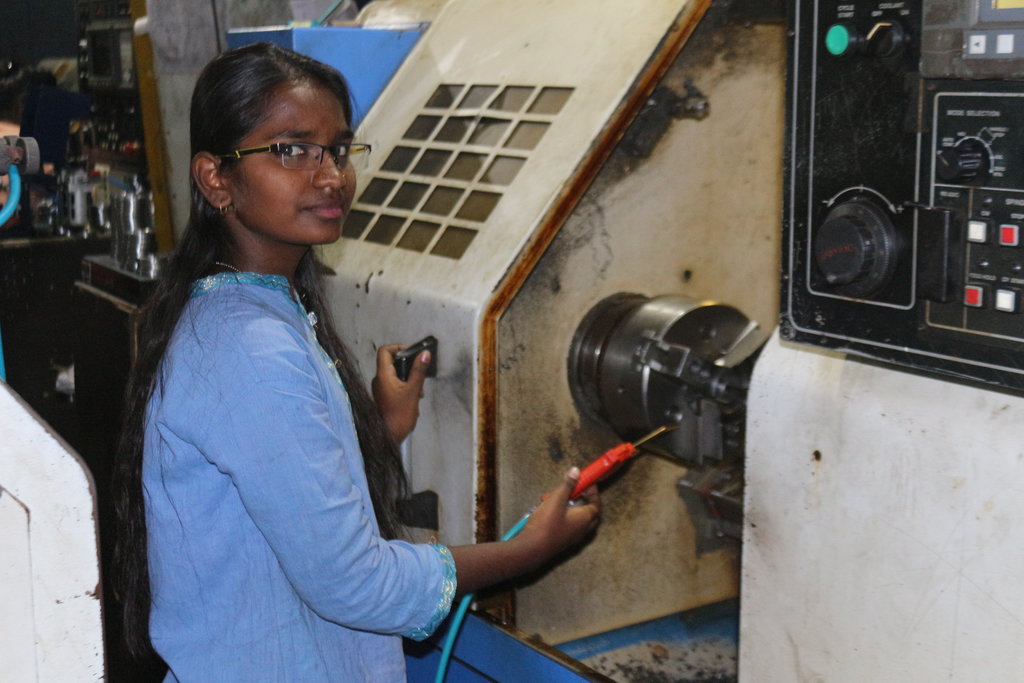 Vaishnavi is the eldest sibling and both her parents have no educational background and therefore she always felt the responsibility to support her parents and also guide and inspire her siblings. To her a vocational course offered more opportunity to learn a skill that can help her decide a career path

As her specialisation in class 11th, Vaishnavi chose General Engineering and Fabrication and for her required internship, she got an opportunity to work with a manufacturing company in Pune.

During her internship, she was required to learn the functioning of CNC or computer numerical control machine, in producing motorbike parts. However, she was too excited to just watch and learn. Only in a matter of few days, she was operating the machine. Vaishnavi was not just the only female on the shop floor but also turned out to be the most productive one. Her co-workers, who were trained engineers, were each assigned a target to produce a certain number of components while Vaishnavi, just being an intern was given a freehand to work as much as she want. And as it turned out, Vaishnavi was eventually exceeding everyone’s target, which was not appreciated by her co-workers to which she responded, “I’m here to work as much as possible.”

Right after completion of her schooling, Vaishnavi enrolled in a diploma of CNC programming and is now pursuing an undergraduate degree in Commerce. She says, “That way, I’ll be able to do my own accounting when I own my own CNC machine —and my own business.”

From a Child Labour to a Trained Apprentice and Aspiring Entrepreneur

This is the story of Kriti, who broke the shackles of domestic labour and transformed into the first female Gardening Apprentice and an aspiring entrepreneur!! 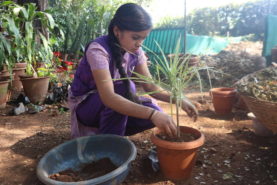 Kriti’s fate was sealed, when her mother sent her away to live with an Aunt due to her father’s drinking problems, thinking that Kriti can peacefully resume her 11th grade from there.

However, soon Kriti realised that her Aunt had no intention of educating her further and kept her busy the whole day in cleaning utensils and other chores. Kriti’s mother had high hopes for Kriti’s future, looking at her good grades in school. Also, she regretted marrying off Kriti’s elder sister in an early age, under family pressure.

Looking at Kriti’s dismal condition, her mother called her back despite a lot of pressure from her relatives and got her admission in 11th grade.

Despite missing her classes for two months, Kriti chose not one but two vocational courses- Gardening and Retail and now has a Level 4 certification in both these courses. Not many of us remember our favourite subjects in school, but when asked, Kriti still fondly remembers her favourite subjects like customer relations, sales, packaging etc.

In Kriti’s case, vocational education did not just help her to get an apprenticeship or earn a living, it was an escape from a possible life of slavery to a life to of freedom which is now filled with dreams of having her own Green Café. When she was asked what it means, she says, “ I imagine it as a space filled with beautiful plants and colourful flowers and people enjoying their coffee with lots of oxygen around”.

Vaishnavi and Kriti are two of the 800,000 students who are studying vocational subject and have completed internships with local small and micro entrepreneurs introducing them to the “World of Work” through Lend A Hand India, an organisation that works to develop job opportunities for ambitious youth in India in 8500+ schools across 24 states/UTs.

Vaishnavi and Kriti are role models for girls who want to pursue education and work opportunities in sectors deemed unconventional for women but also for the girls who come from low income households and have dreams and potential of having successful careers.