Listen to your children, learn about their career dreams

With tremendous experience in the teaching field, Dr. T. Joseph Christadoss, a strong educationist feels that parents play a crucial role in their child’s education and career. He feels that parents cannot simply decide over a child’s career, but it is necessary that they guide, suggest and advice their kids on the pros and cons of taking up various careers. He believes that at the appropriate age, parents need to step in and understand and analyze the child’s interests and strength and also step out and give the children freedom to choose their own career.

Dr. Joseph also strongly believes that no child should be forced and thrust into a career and he says, “I am against IIT coaching and other such things from a very young age, and I haven’t done that to my daughters. I gave them the freedom to explore their interests and I gladly supported them in their decision.” He feels that if the children are allowed to make a choice, then they would feel responsible and accountable for their decisions.

I am against forcing kids into IIT coaching and other such things from a very young age, and I haven’t done that to my daughters.I gave them the freedom to explore their interests and I gladly supported them in their decision. Dr. T. Joseph Christadoss 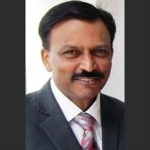 He also reflects on the situation of many new-age parents who try to push their child and see their dreams through them. Being a modern parent himself, he understands that spending quality time with one’s children and maintaining a healthy relationship is the responsibility of a parent. He recalls saying, “My wife and I have always given our daughters the freedom to talk openly about good and bad, and made sure they knew we were always there for them.”

Dr. Joseph also strongly feels that not only people opting for careers in engineering or medicine do well but also those who choose any other career. According to him every profession/career has its own dignity and as such parents should not look down on any course or profession. In fact the parents should inculcate this quality in their children. He also tells us that if his daughters had desired, he would have definitely allowed them to choose a vocational course and make a profession out of it.

On a concluding note, Dr. Joseph tells team NSN, that as a society there is a need to create awareness and the media plays a very important role in this aspect. If the media could portray correctly and highlight the vocational courses and their prospects, awareness could increase in the society.

Importance of training for workplace skills