by Brunda Murthy
in Government, News
0

Skilling for Smart Cities has been one of the key focus areas for Skill India mission. On 23rd October 2017, India’s first Pradhan Mantri Kaushal Kendra (PMKK) for Skilling in Smart Cities launched under Skill India Mission in collaboration with New Delhi Municipal Council (NDMC). This initiative gives a boost to the collaborations and partnerships in the government project. This is a significant steps towards collaborative initiatives between Ministry of Urban Affairs & Housing (MUHA) and the Ministry of Skill Development & Entrepreneurship (MSDE). NSDC will play an instrumental role in working closely with New Delhi Municipal Council Smart City Limited (NDMCSCL) to facilitate setting up of PMKK Centres for Smart Cities and provide short-term training (STT) in addition to implementing Recognition of Prior Learning (RPL) for capacity building of municipal employees. 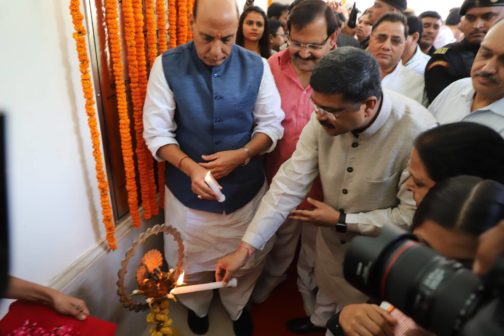 Inaugurating the skill development centres, Union Home Minister Shri Rajnath Singh said, “India which has the privilege of being a young nation, would gain from this demographic dividend to become a superpower and be amongst the top three counties in the world by 2030. The key to reach this milestone is by investing in our youth and making them skilled.” Shri Rajnath Singh added, “A skilled person gets respect, recognition and honor due to his hard work. I strongly believe that these skill development centres would aspire youth to take up vocational training to make themselves self-reliant.” 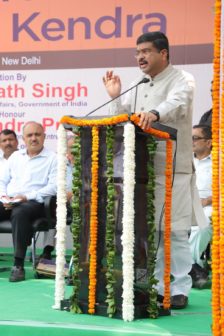 Speaking on this occasion, Shri Dharmendra Pradhan, Hon’ble Minister of Petroleum & Natural Gas and Skill Development & Entrepreneurship said, “Collaboration is the need of the hour to support inclusive and sustainable development in the country. Today’s event signifies integration and convergence approach towards Respected Prime Minister’s two most ambitious projects – the Skill India Mission and the Smart City Mission. Skilled workforce is required for effective development of any big or small project. We aim for recognition and respect to this workforce through skill training.”

Special Guest at the event Smt. Meenakshi Lekhi, Hon’ble Member of Parliament, Lok Sabha, New Delhi said, “I would like to applaud the efforts of both the ministries and its nodal agencies NSDC and NDMC for pioneering steps to bring in equitable growth and development. I am confident that such centers would deliver quality by extending access to trained youth, which would catalyse the creation of smart cities in the country.”

Shri Naresh Kumar, Chairman, NDMC said, “National Skill Mission will prove to be a milestone for the developed India. NDMC supports inclusive development by introducing best practices in skilling and is determined to leave no stone unturned to achieve the mission. This PMKK for Skilling in Smart Cities, would not only focus on high quality of training, but also focus on employability as well.” 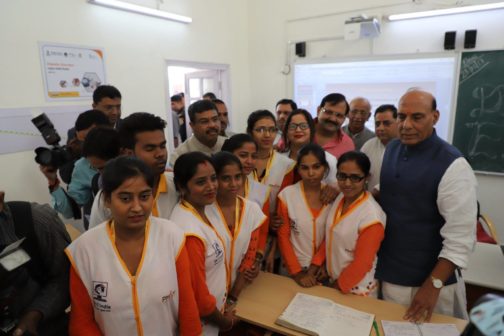 The newly inaugurated Pradhan Mantri Kaushal Kendra leverages NDMC infrastructure for skilling initiatives. Located at Mandir Marg, New Delhi, the NDMC-PMKK Centre for Skilling in Smart Cities is an exemplary heritage building of approx. 30,000 sq.ft., with a capacity of skilling 4,000 youth annually. Catering to healthcare and solar energy sectors, the centre will be managed by one of NSDC’s affiliated training partners – Orion Edutech, which has an impeccable record of training nearly 3 lakh candidates through its network of over 275 skill development centres across the country. On this occasion, a domestic electric lab powered by Schneider Electric was also inaugurated.

(This article is based on a press release from MSDE)