Quest2learn Annual 2019 – The Future of Work and Learning  – A Report

by Brunda Murthy
in Events, Reports
1

Quest 2 Learn 2019 – The Future of Work and Learning, the two-day summit was organised by Quest Alliance where 200+ educators, design thinkers, entrepreneurs, government officials, technologists, and CSR Executives came together to explore the future of work and learning. This was the 4th year of the summit and it was held on the 25th and 26th of July 2019 at the Bangalore International Centre, Domlur.

The summit saw enthusiastic participation from over 200 delegates and an impressive panel of speakers. The discussion touched upon a wide range of topics, such as, reform of the Industrial Training Institutes (ITIs) , inclusive equitable education for lifelong learning, the role of Artificial Intelligence, gender and progress from training to workplace, new transformations in the world of work and trends in future opportunities.

Inaugural session: The first day started with a welcome address by Aakash Sethi, CEO, Quest Alliance and he set the context by elucidating the theme The Future of Work and Learning and its evolution and significance. He also emphasized on the need for helping the young people make informed decisions about their future. Shalini Menon invited the keynote speaker Anantha Duraiappah, Director UNESCO-MGIEP, to speak on the Challenges and Opportunities in Lifelong Learning for Inclusion and Equity.

Below are some key points from his presentation:

He also talked about the projects being implemented in MGIEP using the social and emotional learning approach and the AI backed learning platform called Framerspace.

Next, a report was launched by Quest Alliance in partnership with Vibha on Preventing School Dropout and a Change Map for Effective Practices.

This marked the end of the first session and during the coffee/tea break that followed there were exhibits displayed in the ground floor showing how AR and VR are transforming our lives.

Session 2: In the second session for the day another report was launched by Quest Alliance in partnership with JP Morgan on Bringing women into workforce: Career aspirations of Women in ITI.

Deepika moderated a panel discussion: Journey of a Thousand Miles: School-to-Work Transition for Adolescent Girls and Young Women where she spoke to three women who shared their experiences.

Sakina through her grit and determination made here parents realise that she is equal in fact better than her brother and hence should be allowed to study. Today her parents are proud of her.

Meenakshi completed a 1 year course at an ITI and is now working as a Quality Analyst in a BPO. She is financially independent and supporting her family.

Sr. Dayana Rodrigues Principal, Nirmal Jyothi Technical Institute, shared her experiences with the girls in her ITI and their hopes and aspirations.

This was followed by a panel discussion on Girls’ Education and Skilling of Young Women as a Force Multiplier Collaborative action by funders for gender responsive work, inclusive education and equity in economic opportunities. Vikas Goswami moderated the panel consisting of Vandana Varma from IKEA Foundation, Shailja Mehta from Dasra and Rumi from IBM. All the three women spoke about the initiatives their respective organisations are taking to empower women.

This insightful session marked the end of the second session and was followed by lunch at the rooftop. During and after lunch there was the Maker in Me exhibit available on the Ground floor and the Learner Zone on the First floor for people to see and experience it. The learner zone depicted the 5 key insights from building a country-wide virtual community for trainers.

Session 3: Post lunch, there were three parallel tracks to choose from.

Here we heard young adults talk about their inspirational stories and experiences where they have used digital platforms to build their careers and dreams. The girls shared their experience with network marketing and how they have become financially independent through it.

The other two parallel tracks were entitled The Self Learning Continuum and Learner Zone: People, Partners and Perspectives.

This was followed by an electrifying performance by a local music group called Bhoomithai Balaga. They had specially composed and chosen the songs based on the theme in Kannada.

In the final session for the day, another report was released by Quest Alliance in partnership with LinkedIn on Navigating Career Pathways.

This was followed by a panel discussion with Harshada Desai, Vikrom Mathur and Hosea Lai on Digital career platforms as a real time reflection of this changing world. Abhijeet Mehta moderated the session.

The last session was a duet talk between Aakash Sethi and Sabina Dewan, President and Executive Director, Just Jobs Network on Trends and implications of the Future of work in India. Sabina underlined the importance of young people focusing on hard work, soft skills, numeracy, literacy, ethics and civic sense too while placing their aspirations in a context.

Day 2 began with Aakash Sethi making an announcement about Quest Alliance’s partnerships with Cisco and Accenture for imparting Employability Skills.

Session 1: The keynote speaker Mr. Sunit Sinha, Managing Director, Accenture – Strategy, Talent and Organization, took over to speak on the topic: Increasing the Value of Human Competencies in a Digital Setting

Some of the points made by him were:

He also stressed on the need to have a work-life balance for a fulfilling career.

After the interesting session by Mr. Sinha there was a panel discussion on Levers for Systems Change and Reform in Industrial Training Institutes for 21st Century skills.

Vipul Mitra presented an overview of the evolving ITI ecosystem and how in Gujarat every Taluka has an ITI and they are all digitally-enabled. He stressed on the importance of imparting life skills to students and said they have made it a part of the curriculum in Gujarat. He also said in the state they have converted all the employment exchanges into career counselling centres and training the staff accordingly.

Murugan Vasudevan spoke at length about CSR and its purpose, how it can be leveraged for faster collaboration between the government and the corporate sectors to solve big problems. Elaborating on the subject, he said that any design for solving the problem should be scalable, replicable and sustainable.

Ashutosh Tosaria shared his experience about working with various ITIs across the country and that they have reached out to the Principals of ITIs. He said they have identified the following 6 critical areas

Nikita Bengani introduced the App and it was available for demo and download in the Ground floor.

Session 2: The next session after the tea break was on Fuelling Aspirations and Autonomy: Girls in STEM Careers

Sahana, a 10th grade student from a government school shared her experience working with STEM. She created a project using SCRATCH. She said after they started computer classes in school, it helped them develop their minds.

Krutika, a Computer Science graduate talked teaching in the government schools and the gender discriminations that exist when it come to STEM careers.

A panel discussion followed on STEM in the context of the present and the future. The experts included Gargi B Dasgupta Director, IBM Research India & CTO, IBM India and South Asia and Osama Manzar, Founder, Digital Empowerment Foundation. Neha Parti moderated the session.

Stating the fact that 80% of the jobs would be around STEM, Gargi B Dasgupta placed the need to re-imagine how STEM can be introduced in schools and why it is important for girls.

Osama Manzar said that we should look at a holistic education systems and use STEM to make women more functional in governance, agriculture and healthcare etc.

Next, Sushmita Sridhara presented the Trainer Recognition Awards; five trainers were given awards for their exceptional work. Sister Verghese also known as Cycle Didi handed over the awards, she has been doing some exceptional work in the remote areas of Bihar for girls for the last 40 years. The 5 people who received the awards were:

Following are the points discussed:

This session marked the end of the two-day event. There were many networking opportunities for people during tea breaks and lunch breaks. 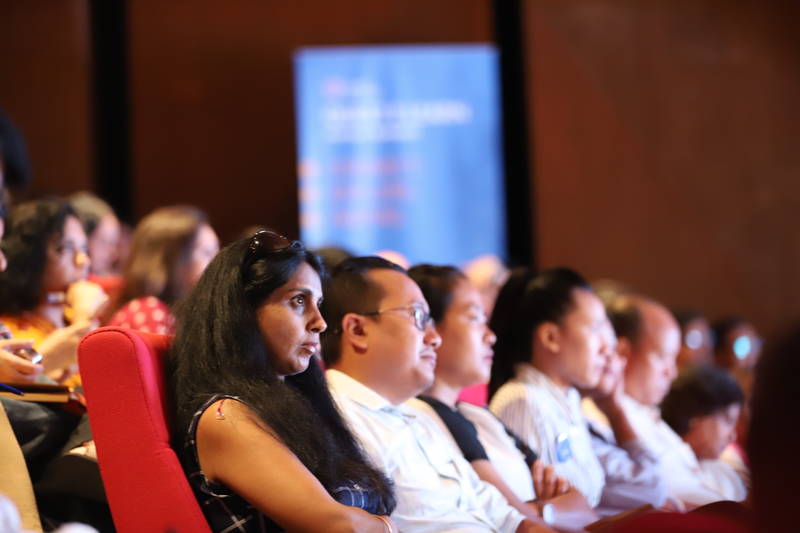 The power of soft skills for employability

The power of soft skills for employability