With a view to recognise the sterling contributions made towards skill development in the Rubber value chain including both plantation and manufacturing segments, Rubber Skill Development Council (RSDC), the sector skill council in Rubber celebrated the 2nd Award Ceremony on 10th of November 2017, at New Delhi.In one of the prevalent gatherings in Rubber sector, the award ceremony held at the prestigious The Leela New Delhi, brought together a large number of stakeholders from all the parts of the country. 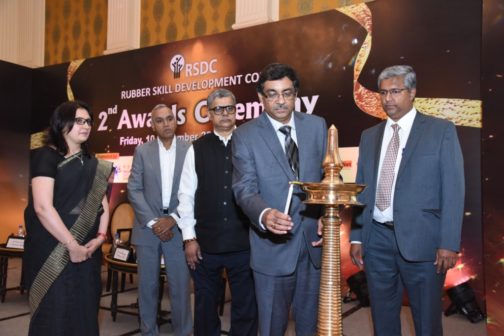 Welcoming the guests, Chairman of RSDC, Mr Vinod Simon said, “RSDC has cast its net wider in the last one year and is making its presence felt in all the places where skilling could provide better employment, ease the lives of people, enhance competitiveness and bring a sense of pride by making skills aspirational. According to Mr Simon, RSDC has already tied up with 10 State Missions besides 11 universities. Overall 70,000 people have received trainings under the aegis of RSDC so far.”

Mr Manish Kumar, MD & CEO of National Skill Development Corporation (NSDC) and Chief Guest on the occasion received huge applause from the audience when he stated that demographic window of opportunity for India is currently open and could lead to country’s turnaround if exploited well. Citing examples of South Korea and China, Mr Kumar stated that per capita incomes in these countries have gone up manifold in the last 2-3 decades as these countries made the most of the available opportunities through emphasis on skilling.

Guest of Honour Mr Satish Sharma, Chairman Automotive Tyre Manufacturers Association (ATMA), said India is undergoing tremendous change perhaps something never experienced earlier. Technological adaptation is taking place at a fast pace leading to large scale changes in the way we live, travel or do business. According to him, India has decided to move from BS IV to BSVI emission norms in three years while worldwide this transition took place in 15-20 years. Skilled workforce is a must for this technological leap

Prof. Anjan Kr. Ghosh, Vice Chancellor, Tripura Central University and Guest of Honour emphasised on more academia – industry interaction so that students pursuing polymer and rubber technology could be encouraged. He invited the industry to visit Tripura to get a first hand exposure to the courses being run by the University.

In breakthrough initiatives and firsts by any Sector Skill Council in India, RSDC launched Stimulated e-learning content and Mobile app to provide the ease in connecting with the target segment by introducing the courses online and benefit the students and those looking for upskilling in rubber across the country.

Best Training Partner award was received by Rubber Board of India, Dr Rani Joseph was adjudged as the Best Trainer. Mettl received the award as Best Assessment Agency while Best Assessor award went to Mr Sarvana Kumar. Anjitha A M were conferred the best trainee award in manufacturing, whereas in Plantation best trainee award was shared between 3 candidates, Prasad Sing, Sunil A and Udaya PS, respectively.

Following is the list of winners of the evening: