Pursuit of Excellence in Skills: An interview with Simon Bartley, President, WorldSkills International

On the occasion of WorldSkills Abu Dhabi 2017, we are delighted to present a Skill Talk by Simon Bartley, President, WorldSkills International. Giving a sneak peek into the much-awaited global event, Mr Bartley shares his insights on excellence in skilling and employability of youth at the workplace of 21st century, with particular reference to India and its Skill Mission.

Competition always makes people better achievers. So, bringing together 1300 young people, best in their skill in their home country, to compete against each other, must truly be the next step towards excellence. And if you believe that in order to develop appropriate skills in the workplaces of 21st century through college and university, a then excellence is a criteria that we need to encourage and have as a benchmark. This is important for all the qualifications and courses that individuals throughout countries like India, will embark on, in the hope of having a satisfactory and rewarding and career.

WorldSkills Competition brings people from various countries in various disciplines, to compete against each other. Of course you can draw parallels with international sporting competitions. There are some differences, for instance, most competitors, who come to Abu Dhabi will never have competed against their competitors in Abu Dhabi before. So, there is no advance knowledge about who is going to be the favourite or who might have done personal best this year; it really is a very open competition.

WorldSkills Competition started in 1950 between Spain and Portugal and most of the skills in those days were either Engineering or Construction, and certainly in the last 16 years (through 8 or 9 competitions) there has been an increase in other areas of skills such as Hospitality, IT, Logistics and others. This brings in skills that are truly global, skills that are being practiced and learnt in colleges and workplaces around the world and I think, what we are trying to do is increase those skills which are commonplace and are relevant for the jobs of the 21st century. That also means it isn’t just new skills or hi-tech skills or IT skills because many of the Construction and Engineering skills such as Brick laying, Welding are relevant today in the workplace, even though they are perhaps, regarded as traditional.

We look at the standards required by industry around the world and we seek to put together in the competition the test pieces that are at the cutting edge of what is being expected of the workforce by industry at the global level. During my recent visit to Delhi I could gather that India is beginning to take right strides in skills movement with the involvement of industry bodies like FICCI and the Sector Skill Councils.

How India can leverage WorldSkills platform

I’m delighted at the support that is being given to the Indian team as it gets ready to part within a week for Abu Dhabi. Prime Minister Narendra Modi’s philosophy of Skill India is an example of great leadership from the very top level. I believe that WorldSkills Competition can be one of the tools that can be used by WorldSkills India, by Sector Skill Councils, by employer organizations, to raise even higher skills levels of India and make those skills even more available to the young people of the country. Simon Bartley 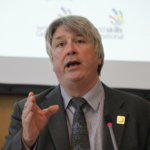 World Skills does a number of things, first, it allows the experts who accompany competitors to identify the techniques, the learning methods, the standards that are taught elsewhere in the world so that will allow India to benchmark the skills that it is promoting, and the level and the numbers it is promoting against its global competitors in those areas.

Second, by having young Indians competing in the WorldSkills, it will identify champions and the role models that can be held up to the youth of today, but it is equally important to their parents and their teachers to demonstrate thus, that there really is a requirement of brightest young people to enter vocational craft, a technical method of developing a career as well as or instead of going to a university.

Around the competition, we are having a WorldSkills Conference, with some 35 ministers from 35 countries, with representatives of NGOs, of Commerce and Industry, all coming to talk about the skills requirements and methods of developing skills of the future. In parallel, we’ve also got 300 young people from 80 countries coming to give their views around what is going to be the requirements of the future.

WorldSkills is more than just a competition, it’s a whole movement which seeks to unify the perceptions of skills around the world.

WorldSkills brings people together so that they can look at standards, secondly they can talk about the best methods of getting the message about skills to young people, to parents, to industry, It also looks at the education system, the skills, the careers, requirements in skills.

Global emphasis on skills and role of parents and teachers

Wherever you are in the world, parents are critical to the decisions that young people make, depending on the country, at the age of 14 to 16 years. The other group of critical people are teachers, and parents have had 3 or 4 generations of politicians telling them that measure of success of their children has beem university education , a Bachelor’s degree. The same has been re-emphasized by most teachers, having a degree themselves and therefore promoting what they did.

The world is waking up to skills! Employers, industrialists have been saying for few years now that they can’t run their companies, just with everybody having degree and qualifications; what they need are technicians, they need bright young people who go to college and move into the workplace with excited heads, hearts and hands rather than just heads and hearts.

Economic evidence shows that you can’t run a country’s economy by only having Bachelors, Masters and Doctorate graduates. You have to have people who are going to be able to run and maintain machinery, carry on haircuts or do welding at the highest level.

Governments and bureaucracies are really taking this message on board. With Skills Competition we need to get that message out to our delegates, attendees, politicians, so that they can actually get the message out to parents, actually their children can have just a good career, just a good lifetime salary, by commencing skill development training at the age of 14 to 16 as they can go to university at 18 to 20.

Most competitors, for instance, in the UK, come from small or medium size businesses, some from big businesses but skills are fundamental within entrepreneurs, within startup companies, with specialist companies in supply chain. and if you shine our lights on the young people who have these skills, that come from these type of companies, then actually the knock on effects are even greater than they are if they go to competitors from big companies.

We must never forget that all big companies started as small companies. And most small companies start by someone who has learnt their trade or their craft and decided to become their own master. Also with the engagement of the government, the engagement of employer bodies like FICCI, sector skill councils, trade unions, you can get the message out to small businesses, thus by working together with educators, you can get businesses to work together, measure themselves very simply and learn new tricks and and new ways of learning from each other.

I hope the delegates from India will bring back positive messages from the event and you can follow the event on social media and websites for media coverage.