The 14th workshop of the Skill Connect Roadshow on apprenticeships was held in Ahmedabad on 26th September 2018. The event was attended by Surpreet Singh Gulati IAS,  Director, Employment and Training, Government of Gujarat and Mr Raju Shah, Vice Chairman, CII Gujarat State Council & Chairman, Harsha Engineers Ltd. The workshop was jointly organized by National Skill Development Council (NSDC), Confederation of Indian Industries (CII) and Deutsche Gesellschaft für Internationale Zusammenarbeit (GIZ). The event saw active participation from all the stakeholders in the evolving skills ecosystem such as the industry, the training partners and the sector skill councils.

Mr Surajit Roy, Director, Apprenticeship, NSDC, explained the reforms under the Apprenticeship Act that have incorporated most of the demands of the industry to make the apprenticeship regime industry-friendly and shared the new operational framework for Apprenticeship in India. He encouraged the industries to make Apprenticeship Programme a powerful tool for recruitments. Witnessing the overwhelming response of stakeholders in the Skill Connect Road Show workshop, he urged the State Government to organise more workshops and take the state of Apprenticeship in Gujarat to the next level.

He also encouraged the participants to hire apprentices as it is a major opportunity for the industry to generate employable workforce. To showcase the user-friendly interface, NSDC conducted a live tour of the Apprenticeship Training Portal. 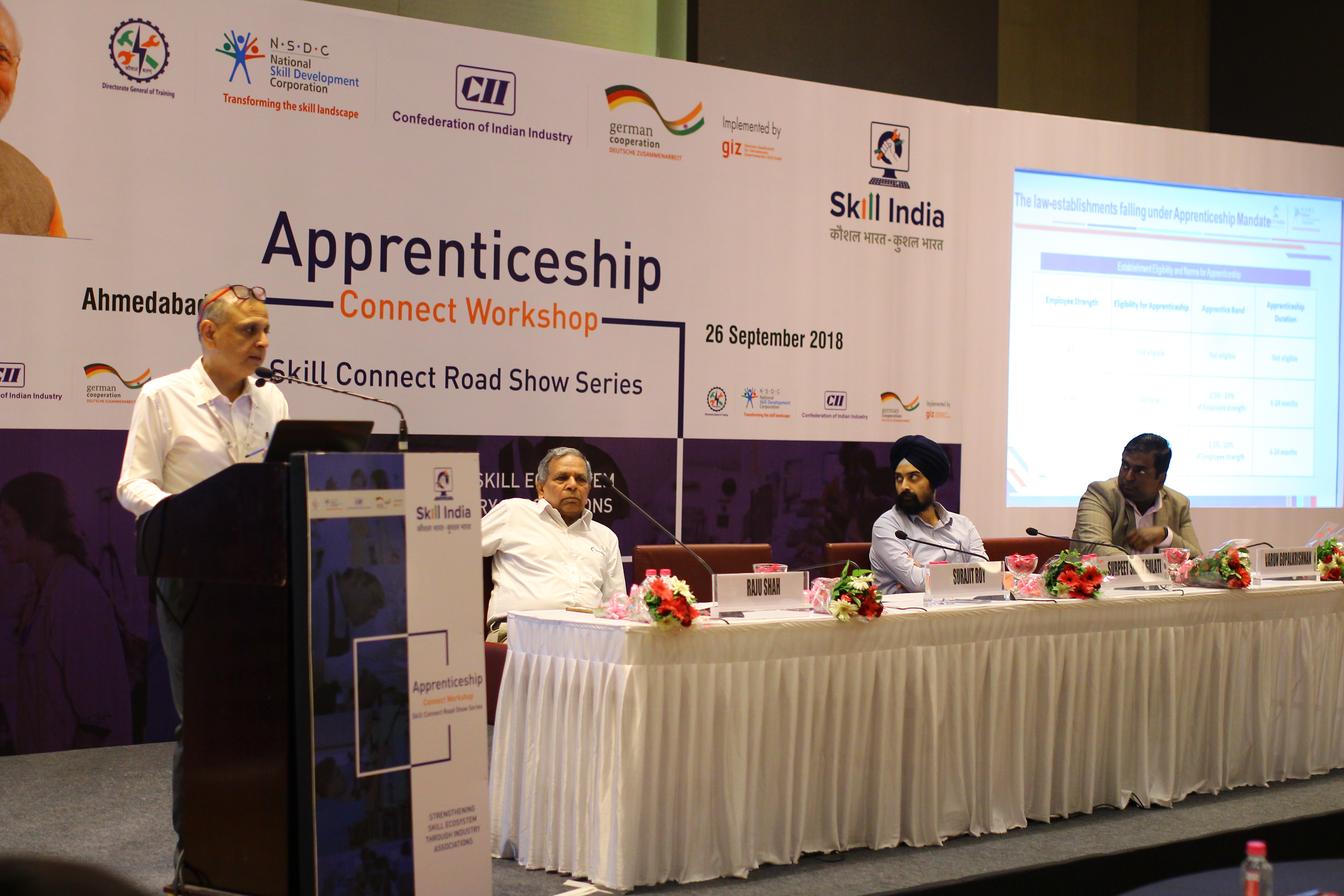 Mr Raju Shah endorsed the dual model of training and hailed it as a step towards making the workforce employable. He also discussed the progress of the Kaushalya Vardhan Kendra (KVK) as a tool towards skill development and training, which has helped the youth to lead an independent life. Highlighting the issue of non-availability of skilled workforce in Gujarat, he stressed on developing state-of-the-art training centres in the State to skill the youth and make the industry an academia.

Mr Surpreet Singh Gulati raised the issue of skill gap and hailed the Apprenticeship Programme as a major step towards fulfilling aspirations of the youth, demands of the industry and, at the same time, satisfying the consumer. Sharing the noteworthy success of Apprenticeship in Gujarat, he highlighted that the State has witnessed a positive change in the last six years, which is expected to grow on a large scale in the future as well.

Benefits of the Dual Model of Vocal Education and Training were shared with examples of the Automotive cluster in Aurangabad, Electronics cluster in Bengaluru and Energy Efficient and Manufacturing cluster in Bhiwadi. Highlighting how clusters steering the initiative of skill development and training in Germany has effected an efficient workforce, she urged the participants to take up the opportunity to skill the youth in their respective industries by setting up training centres with the help of State Government.

The Indo-German Programme for Vocational Education and Training and the experiences made by the project in creating a systemic change by enabling industry associations to become ‘professional skill development service provider’ were shared in detail. Elements of the German models of Dual VET which can be replicated in India, especially the larger focus on in-company training, training of the in-company trainers and the role of the chambers in implementing the vocational training was presented.

CII presented its 360-degree assistance in the Indian industrial ecosystem and offered to support the industries through handholding, providing a help desk and addressing both the demand and the supply side with respect to the Apprentices by systematic identification through Model Career Centre, which have been established to overcome the limitations of the Employment Exchange. The activities were classified into policy advocacy, on-ground skill initiatives and realising youth aspirations. Benefits of the proposed Model Career Centre in Ahmedabad were also discussed to encourage the participants in the workshop.

By means of interactive session, the participants were invited to deliberate on the inputs provided by NSDC, CII and GIZ. The results of the group discussions were shared in plenary, which included the job roles which are required by the companies including the number of apprentices against each of these job roles; the support which is required for enabling the companies for effective participation in apprenticeship programme and the challenges they are currently facing.

The next workshop under the Skill Connect Road Show will take place on September 28 in Indore.