by Team NSN
in Events, Industry
1

Coordinated by National Skill Development Council (NSDC), Confederation of Indian Industries (CII) and Deutsche Gesellschaft für Internationale Zusammenarbeit (GIZ), the event in Chennai received an overwhelming response from industry and sector skill councils, training partners and others, who participated in the dialogue on implementing the Apprenticeship Training in the industry. The fifth workshop of the Skill Connect Road Show was held in Chennai on August 28. 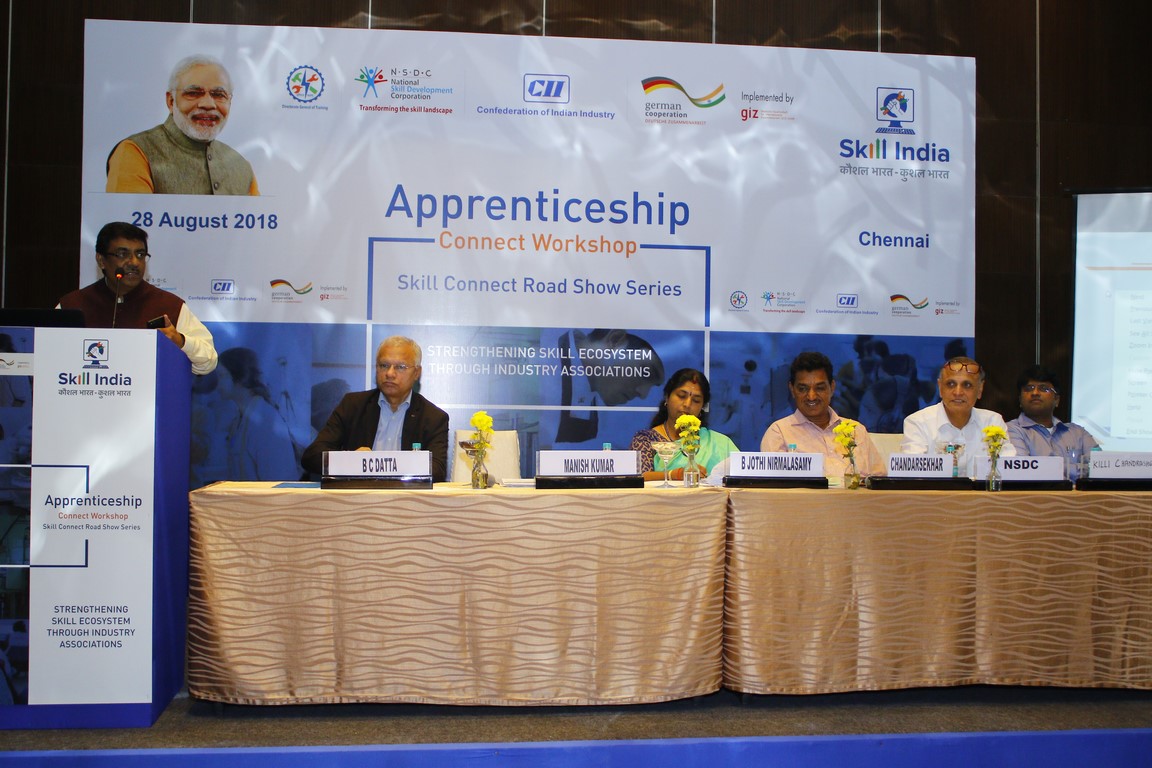 Mr B C Datta, referring to the importance of skill development in driving the nation’s economy, affirmed the Apprenticeship Training as a major step towards skilling of youth in India.

Mr Manish Kumar highlighted the importance of skill development in India in the contemporary context. Explaining the significance of the debates and discourse at the State level in policy formulation, he promised to encourage the dialogue at the State level by means of advanced technology and healthy discussions. By skilling the youth, there is a notable increase in their productivity, the returns of which help the industries and the nation at large, he explained.

Ms B Jothi Nirmalasamy, acknowledging the participation of industries in skill development initiatives, informed that Tamil Nadu is amongst one of the leading states in skill development in India. She appealed the industries to identify new job roles, develop new courses and bring them to the notice of the State Government for inclusion under SCVT. She encouraged the industries to partner with the Government in skilling the youth and moving towards the “Skill India” mission.

Mr C Chandarsekhar welcomed the concept of accessibility and dialogue and urged the industry members to bring the issues faced by them to his notice for quick redressal.

CII presented its 360-degree assistance in the Indian industrial ecosystem and offered to support the industries through handholding, providing a help desk and addressing both the demand and the supply side with respect to the Apprentices by systematic identification through Model Career Centre.

GIZ presented the Indo-German Programme for Vocational Education and Training and the experiences made by the project in creating a systemic change by encouraging industry associations to become ‘professional skill development service provider’ for its member companies. The experiences from Bhiwadi and Aurangabad were shared in details so as to create an understanding on how the industry or cluster associations can apply elements from the new Apprenticeship operational framework to steer the skill development services.

By means of interactive session, the participants were invited to deliberate on the inputs provided by NSDC, CII and GIZ; and in the context, present the opportunities and areas of improvement for a speedy review; the support that should be extended by each of the organization as well as their participation in apprenticeship training (the job roles they expect would be required by their companies, and the corresponding number of apprentices).

The next workshop under the Skill Connect Road Show will take place on August 29 in Coimbatore.