by Team NSN
in Events, Industry
0

Coordinated by National Skill Development Council (NSDC), Confederation of Indian Industries (CII) and Deutsche Gesellschaft für Internationale Zusammenarbeit (GIZ), the event in Coimbatore received an overwhelming response. The workshop was attended by more than 75 participants which included representatives from the industry associations, companies, Sector Skill Councils, training partners and Government. The sixth workshop of the Skill Connect Road Show was held in Coimbatore on August 29. 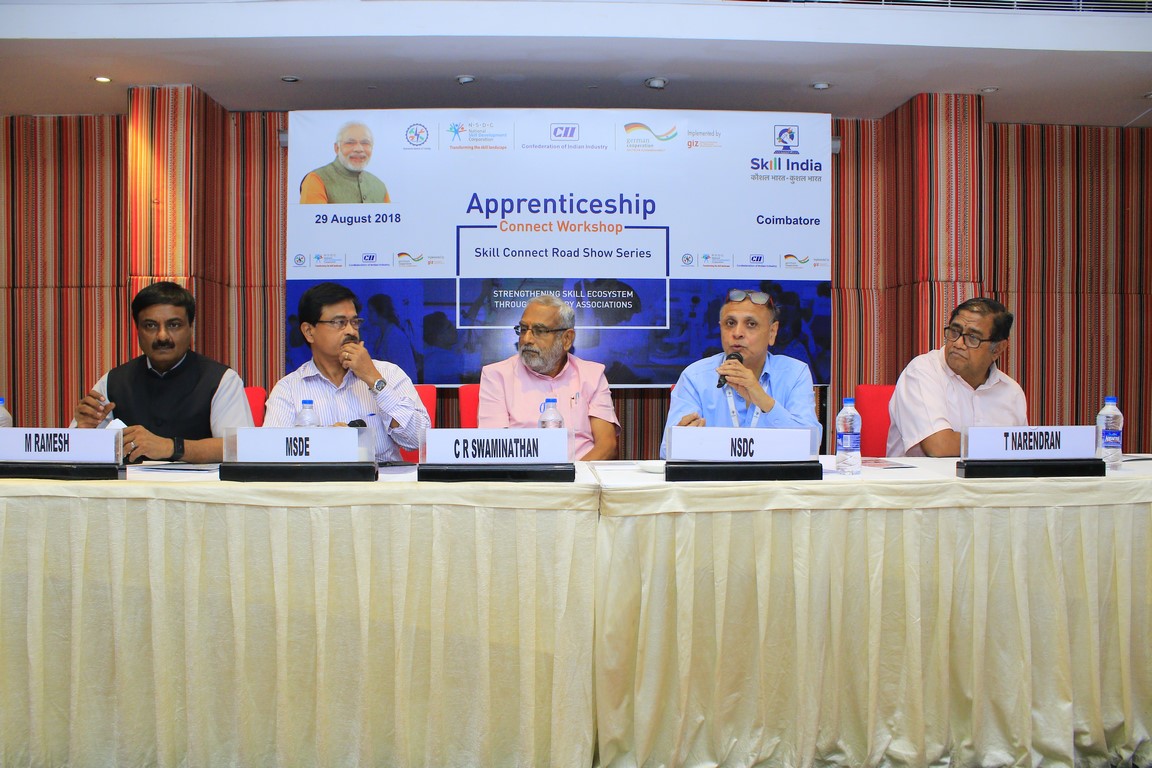 CII presented its 360-degree assistance in the Indian industrial ecosystem and GIZ introduced the Indo-German Programme for Vocational Education and Training and the experiences made by the project in creating a systemic change by encouraging industry associations to become ‘professional skill development service provider’ for its member companies.

Mr Shah Jahan, Joint Director, RDAT Chennai, appealed the participating industry associations and the companies to register themselves as a Basic Training Provider (BTP), design their own courses and hire apprentices from various sources including Government Industrial Training Institutes (ITIs).

Mr C R Swaminathan, Past Chairman, CII Southern region, responding to the issue of lack of interest among the youth at institutional level, advocated the idea of students pursuing their careers in the area of their interest, leading to positive outcomes including enhanced productivity, job satisfaction and a low attrition rate.

Mr T Narendran, Vice president – Finance and Administration, Aquasub Engineering, praised the state of Apprenticeship in Coimbatore. He informed the participating members that the Apprentices in Coimbatore have been hired in countries like Singapore and Malaysia. Discussing the Centre-State harmonisation, he highlighted the importance of efficient coordination between the Centre and the State and urged the Central Government to actively support the States to encourage participation from the apprentices.

By means of interactive session, the participants were invited to deliberate on the new and upcoming job roles which might be required by the member companies in the near future, and their likely requirement of the Apprentices for the same.

CODISSIA (Coimbatore District Small Industries Association) and the ITF (Indian Texpreneurs Federation) committed their roles in leading apprenticeship training for their members. The participating companies shared the job roles with the corresponding apprentices they intend to contract.

The next workshop under the Skill Connect Road Show will take place on September 7 in Noida.