National Skill Development Council (NSDC), Confederation of Indian Industries (CII) and Deutsche Gesellschaft für Internationale Zusammenarbeit (GIZ) collaboratively hosted the Skill Connect Roadshow in Visakhapatnam on 17th September 2018. The event received an encouraging response from industry and sector skill councils, training partners and others, who participated in the dialogue on implementing the Apprenticeship Training in the industry. The event was graced by the presence and active participation of Hon’ble MP Shri Haribabu Kambhampati. In his address on the Skill Connect Roadshow, he endorsed the idea of promoting skill development and entrepreneurship in the state of Andhra Pradesh. He hailed the quality training undertaken by the Indo-German Advanced Training Institute (IGATI) and also the efforts made by the NSDC to set up Pradhan Mantri Kaushal Kendra (PMKK) to carry out skill training schemes effectively.

Hon’ble Minister highlighted the challenges faced by the major sectors like IT, pharmacy, tourism and retail in the state of Andhra Pradesh. Driving the importance of participation of private sector in skill training, he mentioned that the State Government, where possible, is engaging with private sector for designing and implementing skill training courses. Additionally, there is a strong focus on interface between the industry and academia, so that the students can be made industry-ready by the time they graduate. Sharing the initiatives of the in the retail sector, the Hon’ble MP said that a proposal to set up a Model Shopping Mall is under process. The Model Shopping Mall will serve as a shop floor training centre, for which an amount of Rs 52 lac has been sanctioned. Mr Haribabu further congratulated the stakeholders for addressing the critical issue of skill development and ensured support from the ministry to promote Apprenticeship Programme. 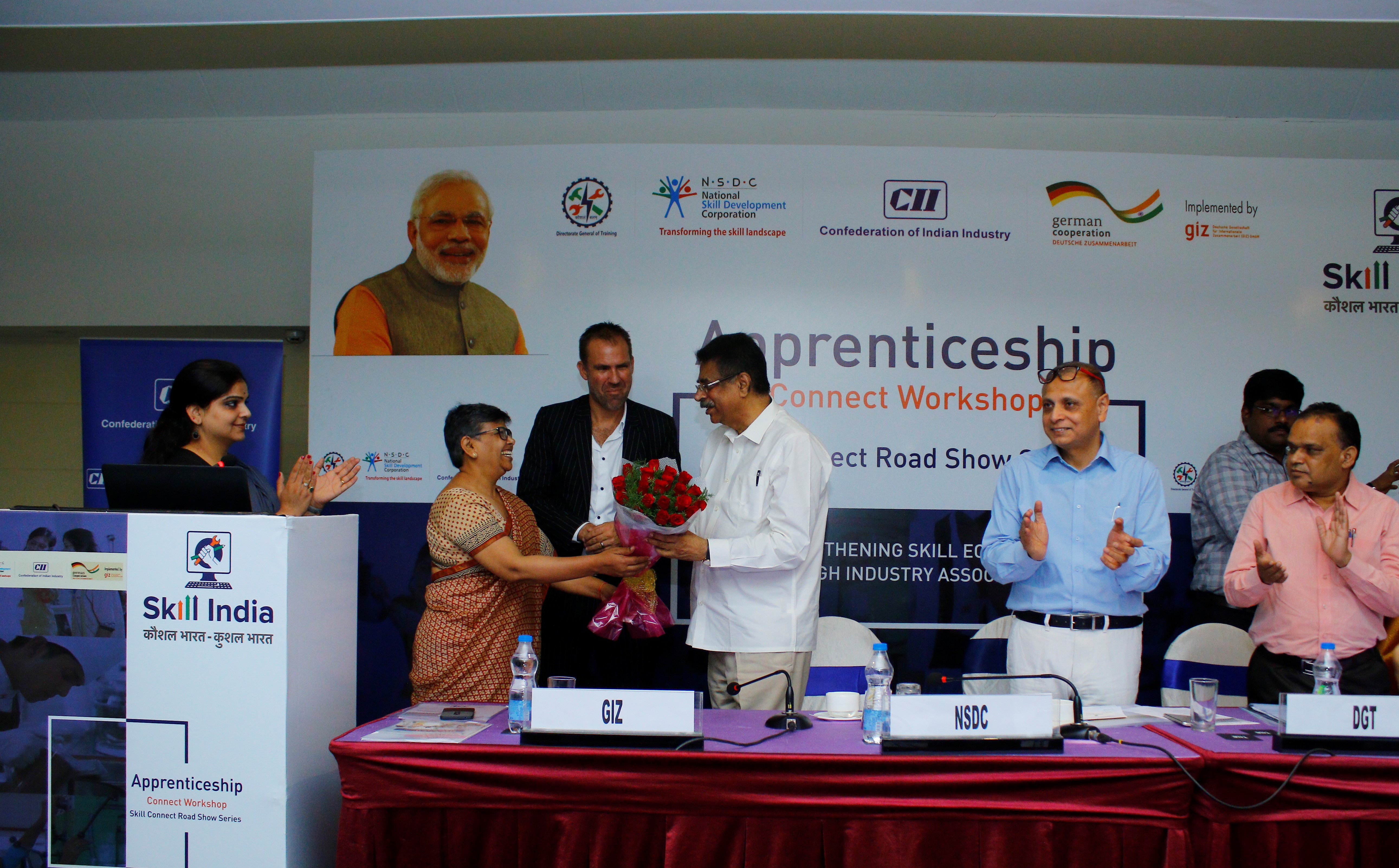 Mr GL Meena, Assistant Director, RDAT Hyderabad explained the role of RDATs and the major changes in the Apprenticeship Act, which has been designed to ease the aggregation of apprentices and Basic Training Providers (BTPs). Sharing the vision of the RDAT, he informed that the RDATs have set a target to train close to 5 million apprentices by the end of year 2020, for which a grant of Rs 10,000 crore has been sanctioned. He further addressed the challenges faced by representatives from the healthcare sector who participated in the workshop.

Mr GVR Naidu introduced the Technology Centre Pudi, set up in Visakhapatnam, to cater to the skill requirements of the MSMEs. The Centre, which will be inaugurated by Honourable Prime Minister Shri Narendra Modi, will start training apprentices from January 2019. Mr Per Borjegren, Team Leader, Indo-German Vocational Education and Training, GIZ India, ensured that GIZ, through IGVET, will support the ecosystem of skill development in India with the help of German values of Dual VET. He further highlighted the urgency of skilling the growing young population of India and make it the biggest skilling revolution the world has ever witnessed. The Dual VET model ensures better quality of products and services and ensures a positive attitudinal change amongst the youth, he said.

By means of interactive session, the participants were invited to deliberate on the inputs provided by NSDC, CII and GIZ. The results of the group discussions were shared in plenary, which included the job roles which are required by the companies including the number of apprentices against each of these job roles; the support which is required for enabling the companies for effective participation in apprenticeship programme and the challenges they are currently facing, especially in sectors like retail, tourism, pharmacy and hospitality.

The workshop ended on a positive note with expectations of enhanced engagement by all the stakeholders in promoting Apprenticeship Programme. Several companies identified job roles and stepped forward/raised their hands towards engaging apprentices in their organizations. The next workshop under the Skill Connect Road Show will take place on September 18 in Hyderabad.