An annual event, ‘Meet at Agra’ is organized by AFMEC to promote Agra as the hub of footwear manufacturers and provides a platform to international producers and suppliers to come together and showcase best of technology in latest footwear trends aimed at fulfilling futuristic demands.

The historical city of Agra has been a footwear manufacturing hub, contributing to domestic and export markets. Agra has about 250 mechanized/ semi-mechanized units and 5,000 cottage industries with a manufacturing capacity of 3-5 lakh pairs per day and has created over 4 lakh jobs for skilled professionals. Agra today meets 65% of domestic requirement and has a 28% share in the total footwear export of India.

Dr. Mahendra Nath Pandey, said on the occasion, “The footwear industry is a significant growth accelerator for India’s indigenous skill-exports. The quality of the footwear we make has received a lot of acclaim abroad, contributing towards the growth of the economy and boosting competition among domestic manufacturers to excel. I congratulate the candidates who have been RPL certified today and extend my gratitude towards the organizers, promoting footwear manufacturing and export in the city. With such phenomenal potential, the footwear industry will only grow multifold and will need a strong skilled workforce for meeting the market demands and international standards.” 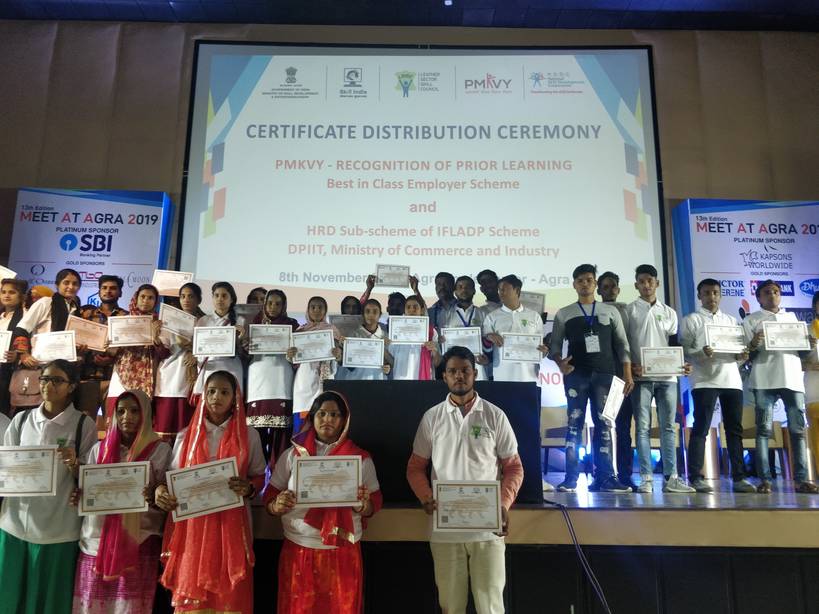 “Skills in India should get the respect that they truly deserve. With the advent of technology and new design skills, India is becoming more competitive in world market and footwear designers are gaining extreme respect for their work of art. These are new areas of expertise and have a huge growth potential for the youth. Agra is one such cluster which has always been popular for its footwear manufacturing and has made a mark across the world in this area,” he further added.

Certified candidates are trained and assessed on their skill set under the Recognition of prior Learning program of Pradhan Mantri Kaushal Vikas Yojana (PMKVY) of MSDE. RPL recognizes and certifies skills acquired through informal means, bringing about a major shift from un-organized sector to organized economy.

The Minister also felicitated select cobblers from Agra with the Mochi Swabhimaan, a Mobile Workshop for cobblers.

The footwear industry contributes about 2% to India’s GDP and has the potential to touch USD 9 billion by 2020. India has trade agreements with Japan, South Korea, Chile, and other countries, in the area of footwear, and is in talks with the European Union and Australia to negotiate a Free Trade Agreement (FTA).

The RPL program of Skill India aims to certify the workforce as per the National Skills Qualifications Framework (NSQF) to rewards and enhance the value of skilled manpower. The certification will mobile quality workforce and will reduce employer dependence for recognition, particularly for women who form a large part of the workforce engaged in footwear making.