by Brunda Murthy
in Events, Government
1

Skill Summit 2018 was successfully held in Ranchi today with over 25000 candidates from the state receiving job offer letters. The Rozgar Mela was organized as a part of the summit and it saw participation from renowned companies in India. The candidates had completed various skill-based courses under various state and central government schemes. The occasion marked 155th birth anniversary of Swami Vivekananda being celebrated as National Youth Day. Shri Dharmendra Pradhan, Minister for Petroleum and Natural Gas and Minister for Skill Development and Entrepreneurship addressed the Skill Summit 2018 and lauded the efforts of the state government in promoting skills and making youth employable.

“Today, Jharkhand leads ideation on Skill Development and the Centre follows them in many ways. It is a role model for other States” – Shri Dharmendra Pradhan 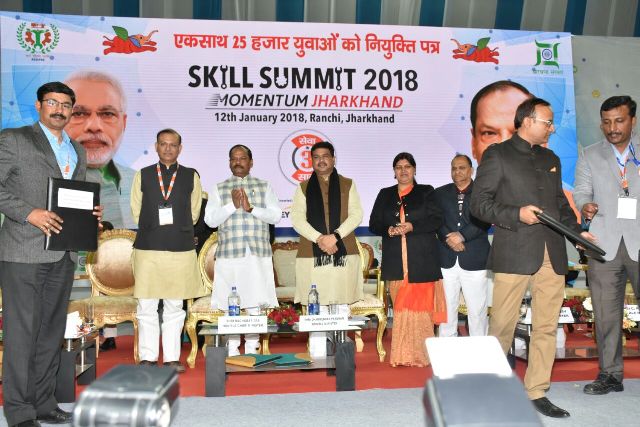 Congratulating the candidates and talking about the progress that has been seen in Jharkhand since its inception, Shri Pradhan said, “Jharkhand has tremendous potential. The State’s development was thwarted by political instability since its creation in 2000. But Jharkhand is now bearing the fruits of development under a majority government & stable leadership. The youth of Jharkhand is very hard working and committed; and if we connect the youth with employment opportunities here in the State, Jharkhand will have enough avenues for growth and prosperity.” 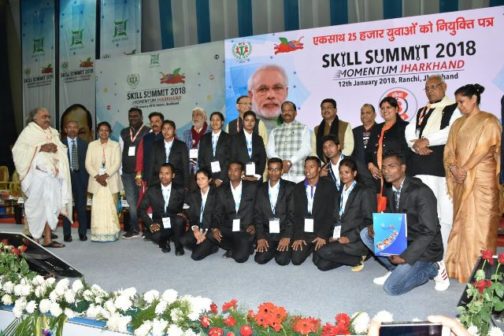 Shri Pradhan said, “Jharkhand accounts for 40% of the mineral resources of India, has rich flora & fauna, has a huge water supply, is popular for its Silk Textile & Handicrafts and large deposits of coal & iron ore support concentration of industry here. This gives us huge opportunity for skill development which will thus help sustain the economy of State. Earlier the center used to ideate, and States like Jharkhand used to implement. Today, Jharkhand leads the ideation on skill development and we follow them in many ways. Jharkhand has become a role model for other States today & in implementing Hon’ble Prime Minister Narendra Modi ji’s vision of a New India.”

Skill development is a key priority under Government. Ministry of Skill Development and Entrepreneurship with support from the State Government, has taken multiple initiatives in enabling the expansion of skill ecosystem in Jharkhand for the benefit of its youth.

A financial allocation for Rs. 89 crore has been approved to Govt. of Jharkhand under PMKVY – of which, the state component of Rs. 6.21 crore has already been released as 1st tranche towards the scheme implementation. 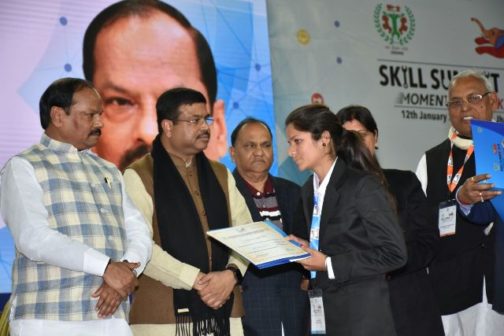 With a motive to provide world class skill development training focusing on employability and to create an aspirational value among the youth to take up skills, MSDE has established six Pradhan Mantri Kaushal Kendras (PMKKs) so far in the State. In order to connect the youth with overseas job opportunities, National Skill Development Corporation is setting up India International Skill Centres (IISCs) across the country including Jharkhand. One IISC is already functional in the State where 60 students have already completed their trainings in General Housekeeper trade.

Shri Pradhan added, “A Memorandum of Cooperation (MoC) on Technical Intern Training Program (TITP) was signed between the Ministry of Skill Development and Entrepreneurship (MSDE) and Government of Japan last year in October, 2017 in Tokyo; which is expected to significantly expand the bilateral cooperation between India and Japan in the field of skill development and create opportunities of employment for Indian youth in Japan. Japan is currently dealing with a crunch in their workforce and India’s demographic dividend can be brought to benefit, with such opportunities coming our way. We will soon have India working in Japan and supporting markets worldwide wherever there is need for skilled human resource.”

For Long term trainings, a total of 255 ITIs are functional in Jharkhand currently with a seating capacity of 63,698 candidates out of which 57,646 candidates have been enrolled so far for the training. MSDE has also introduced a new scheme for Apprenticeship in 2016, NAPS, wherein major amendments have been done in the Apprentices Act to support the establishments and youth. Under this act, Government of India will share 25% of the prescribed stipend with establishments for all apprentices. A total of 205 establishments have been registered so far with 12,972 apprentices enrolled till date in the State.

The government implementation and funding arm, National Skill Development Corporation (NSDC) is also working with many PSUs under their CSR initiative, and Partnerships have been forged with 14 organizations in Jharkhand including RECL, NHPC, NTPC, PowerGrid and Coal India.

(This article is based on a press release from Government of Jharkhand.)