by Team NSN
in Success Stories
1

(This article has 2 pages. Click the NEXT button on below to view all the pages.)

S Naveen hails from Adloor Yella Reddy.  Due to his family’s financial condition, had to discontinue his studies. He used to work on daily wage basis, along with his father, to run his family. One day when he was travelling by bus, when one of his friends discussed about the DDUGKY Programme. He thought if this training would help or not, so he visited TMI E2E Academy Private Limited Institution at Ravelly Toopran. After he met all the trainers, he was convinced that this training would help me. 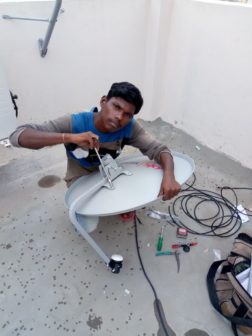 He was made to take an aptitude test, he qualified in that, and joined the DTH course. From then onwards, he attended the classes regularly, where he learnt to use computer, spoken English classes, soft skills, etc. After 3 months, he attended an interview organized by TMI, where “Ayappa Agencies” company recruiters conducted interviews. He was selected and placed as &quot; DTH INSTALLER” with a package of 1,20,000/- per annum. Now he is very happy, and all this is because of “DDUGKY-EGMM Program”, and also, he conveyed his thanks to “TMI e2e Academy Private Limited Company”, which changed his life. Sincere thanks to you all.

R.Shiva Kumar hails from a very poor family. His father and mother both are daily wage earners. After his 10th, he used to go with his family to work, but he was not interested to work there. So he decided to join in any of the vocational courses. One day he was at a relative’s place, when he saw that TMI e2E pvt.ltd team was conducting mobilization camp at their area for DDU-GKY programme, and he went and spoke with them, and told them that he also wanted to join in the institute.  They offered him to come and join in the institute. Next day he went and joined and they conducted one entrance test. He was qualified and he joined in the DTH group. He went to classes regularly without fail. Daily they had classes on spoken English, computer and DTH. And, there were practical classes on installation like Drilling, Signals Tracking, etc. 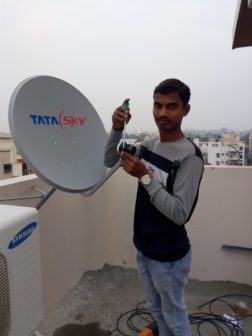 After 60 days, TMI institute took them to Ayyappa Agencies for OJT (On job training), there they learnt how to receive customers, how to face problems at work place, how to track the signals, how to drill unsuitable situations, etc. After successful completion of OJT, he got a job opportunity in the same organization. Now he is working as “DTH INSTALLER” with a package of 1,20,000/- per annum. He is very happy, and this is all because of “DDUGKY- EGMM” and also thanks to TMI e2E pvt.ltd. for providing the opportunity.