The eighth workshop of the Skill Connect Road Show was held in Kolkata on 11th September 2018. Coordinated by National Skill Development Council (NSDC), Confederation of Indian Industries (CII) and Deutsche Gesellschaft für Internationale Zusammenarbeit (GIZ), the event in Chennai received an overwhelming response from industry and sector skill councils, training partners and others, who participated in the dialogue on implementing the Apprenticeship Training in the industry.

Mr Sanjay Pattnaik hailed the Skill Connect Road Show as an excellent step towards nation building, enabling overall skill development of the Apprentices to enhance their functional, attitudinal and managerial competency. He addressed the issue of increasing skill gap as a major factor derailing the growth of the economy. He further urged the participating members and the State and Central Governments to join hands to effect skill training and help India attain the reputable position which it deserves globally. 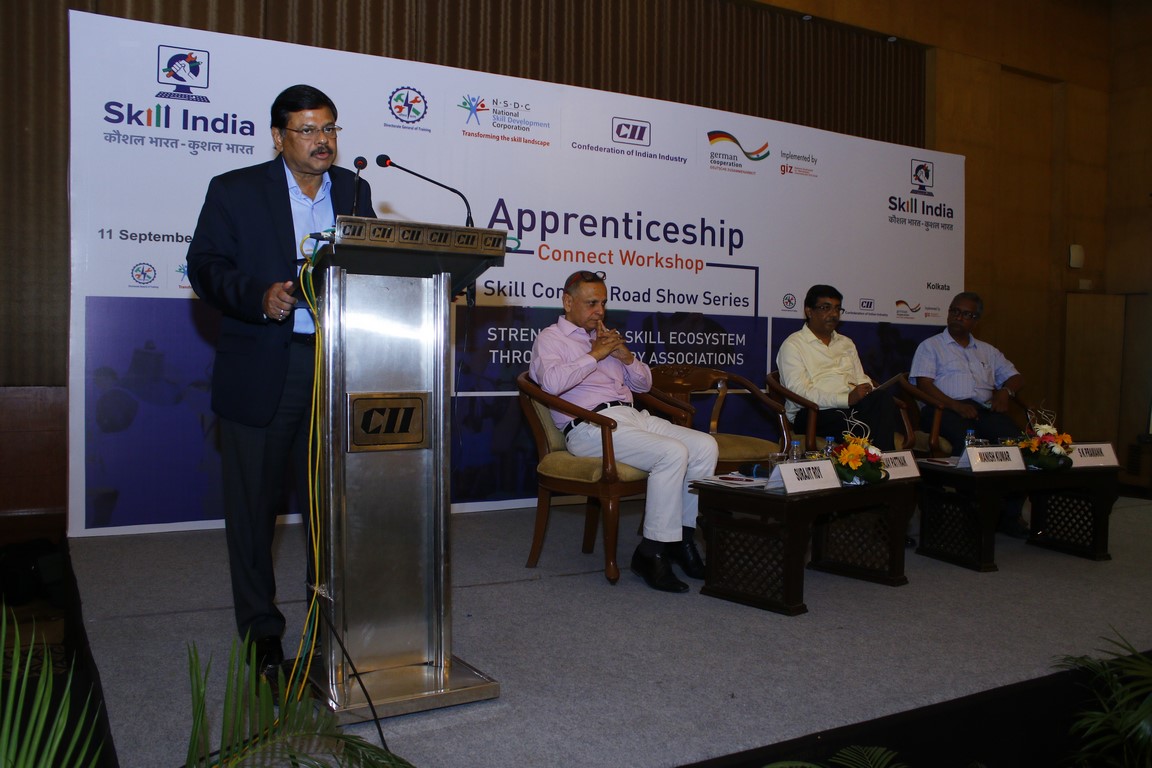 Mr Manish Kumar highlighted the importance of skilling to enhance the labour productivity. Drawing a comparison to the increasing per capita income of South Korea because of their inclination towards Apprenticeship Training, he urged the participating industry members to opt for Apprenticeship Programme under NAPS to reap its long-term benefits and make path-breaking changes to India’s economy. By comparing the various skill development programmes undertaken across the globe, he envisaged developing a unique training programme which exclusively caters to the Indian skill ecosystem. He further encouraged the participants by informing them about the excellent state of skill development and training of workforce in the state of West Bengal.

GIZ presented the Indo-German Programme for Vocational Education and Training and the experiences made by the project in creating a systemic change by enabling industry associations to become ‘professional skill development service provider’ for its member companies. The experiences from Bhiwadi and Aurangabad were shared in detail to create an understanding on how the industry or cluster associations can apply elements from the new Apprenticeship operational framework to steer the skill development services. The need for training of in-company trainers and counselling sessions to ITI trainees as well as youth interested in skill training, was stressed by both GIZ and CII.

CII presented its 360-degree assistance in the Indian industrial ecosystem and offered to support the industries through handholding, providing a help desk and addressing both the demand and the supply side with respect to the Apprentices by systematic identification through Model Career Centre.

By means of interactive session, the participants were invited to deliberate on the inputs provided by NSDC, CII and GIZ; and in the context, present the opportunities and areas of improvement for a speedy review; the support that should be extended by each of the organization as well as their participation in apprenticeship training (the job roles they expect would be required by their companies, and the corresponding number of apprentices).

The next workshop under the Skill Connect Road Show will take place on September 12 in Jamshedpur.