by Team NSN
in Events, Reports

The first ever India International Skill Development Summit & Exhibition (IISDSE 2016) was organised by Europe India Foundation for Excellence (EIFE), on 21-22 November 2016 at The Grand Hotel in New Delhi. The 2-day summit saw active participation from 35 European skill development and Vocational Education and Training (VET) organizations along with the Indian counterparts to explore opportunities for collaboration between India and Europe.

Being the official online media partner for the event, National Skills Network – NSN, has been closely associated with the event right from early stages and has interacted with the organisers, speakers and participants. It was tremendous learning while listening to all the speakers and the interactions on the days of the event. Our team has captured the key perspectives and reflections that summarise the event and guide us for follow-up and further action. 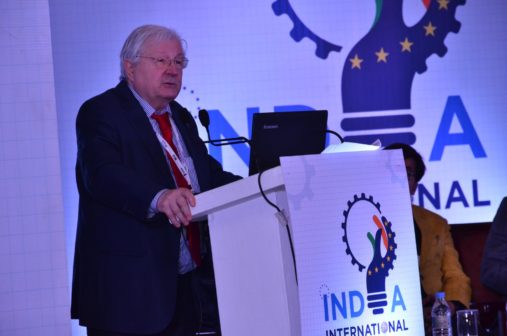 The event was introduced by Christine Nayagam, Director, Media India Group. In the first plenary session, Count Christoper de Breza, founder EIFE, briefed the audience about his personal experience in India and his vision for building sustainable collaboration models between India and the European Union for skilling India. Acknowledging the fact that skill deficit is a global problem, he said that IISDSE 2016 could become India’s international platform of choice to discuss, deliberate and conduct business in skill development in the emerging economy. Ranvir Nayar, Director, EIFE anchored some of the plenary sessions and shared his insights on the proceedings.

The Indian plenary session was conducted by R. C. Reddy, CEO, IL&FS. He encouraged the audience to explore news ways to collaborate with European Union on the future of jobs, automation, robotics through research. He drew attention on the need to acquire new skills to match emerging technologies and how long-term skilling programs and courses like B.Voc can open up multiple career paths. Besides ideas for making skills aspirational, he also felt the need to come up with models for job creators, such as independent people, women, entrepreneurs and SMEs. 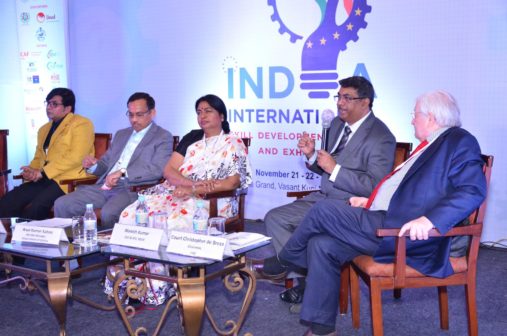 Manish Kumar, CEO, NSDC, briefed the audience about the critical role of NSDC in implementing the vision for Skill India through 40+ Sector Skill Councils (SSCs) that standardize the course curriculum for various jobs roles in the industry. He also mentioned the career pathways that would get created and help in enhancing the aspirational value of skills as there is interoperability between vocational and academic streams in compliance with NSQF. Referring to the recent NSDC Training Partners’ Meet he the concern about risk perception in training. Some points about the private sector’s concern with the ROI:

The emergence of Odisha as an investor friendly state was emphasised by all the speakers in different sessions. The government has come up with StartUp Policy and Skilling for Youth policies to train and employ youth by avoiding migration.

Pranabjyothi Nath provided an account of how under the DDUGKY scheme 30000 youth are trained annually with the help of 69 training partners (or Project Implementation Agencies – PIAs) at 85 centers. The government is focused on large-scale mass mobilisation of 1,47 000 youth and link them with training partners as per their liking and counsel them in skilling areas. There is also special focus on the imbibing quality and standardisation, along with information on who needs to be trained, skill gaps in districts and so on.

Describing the Centurion University as the only one-of-its kind in the tribal belt of Odisha, Prof Mukti Mishra emphasised the need to strengthen our manufacturing base along with the need for capacity, competency, dexterity. He defined the skilled person as someone who uses the least resource to produce the most output. He also spoke about the inclusive model of the university which instills pride in manual work and shows the students prospects and pathways to the world of work.