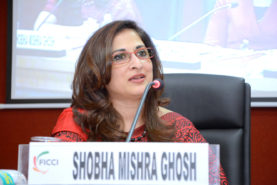 The development and deployment of human capital is a critical element of economic growth and social inclusion of a nation. India’s transition to a knowledge-based economy requires a new generation of educated and skilled people. Its competitive edge will be determined by its 19.8 % women who are enrolling in higher education and their skill to create, share, and use knowledge effectively. IMF has estimated that if the number of female workers were to increase to the same level as the number of men, GDP in the United States would expand by 5 per cent, by 9 % in Japan, and by 27 % in India.

In the past years, India has experienced rapid growth and development in many spheres, but gender equity is not one of them. Women in India represent only 24 % of the labour force that is engaged in any form of work in the market economy, compared with an average of 40 % globally. This is tragic considering the important role played by women in the socio-economic growth of the country. Increased women at work place will not only bring financial independence but will also help build a cadre of women who can serve as role models for young women aspiring to participate in India’s workforce.