LabourNet is a social enterprise that enables sustainable livelihoods for men, women and youth in urban and rural areas. Their three-pronged engine integrates social and business impact by bridging the gaps in Education, Employment and Entrepreneurship.

They focus on formalizing the informal by improving the socioeconomic status of people associated with unorganized value chain. This is achieved through skilling interventions, facilitating wage/ self-employment and entrepreneurship by bringing together all the stakeholders: large, small and medium enterprises, corporates, government, individuals and educational institutions. There are many who have a lot to share about what they have gained and achieved with the help of Labournet, here are some of them who have made a start in their careers in the fields of Optometry and Beauty Services. 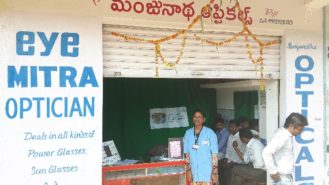 Vennela is a 19 year old girl from Warangal. She lives with her parents, an older brother and an older sister. Her father is a farmer who earns only Rs. 14000 a year. Her brother has completed his B. Pharmacy, whereas she has only studied till the 10th grade. She has been unable to finish her HSC due to the sheer distance between her school and house. She found out about the EyeMitra program through a mobilizer.

Walking the rough road: The mobilizer had to play a very important role in convincing her parents to allow her to join the program. They were initially worried about the financial strain it would bring on the family and the distance between her house and the centre as the latter was in an urban area. However, after a lot of thorough counselling, Vennela’s parents decided to let her give it a shot.

Vennela fell in love with the course as soon as she joined it. The content she had started to learn made her feel like a doctor-in-training. She started enjoying her practical classes the most as it provided exposure to what the actual job would be like. She also felt comfortable with her trainers and thought they had good teaching methods. Upon completion of her training, she decided to open her own shop and received a loan of Rs. 50000 from her uncle. Vennela’s uncle was the only family member who had faith in her and her ability to run a business despite coming from a family, where being born a girl implied many limitations.

Making dreams a reality: With that money, she opened her shop on the 4th of December. She has spent around Rs. 5000-7000 on operational expenses. Her peak business hours are in the afternoons where she gets about 2-3 customers. She has earned about Rs. 1600 so far which she wishes to re-invest to set up a partition. As soon as she set up a shop, the first thing she did was to give her parents an eye-checkup. Seeing her in her coat and using her instruments gave them a sense of pride as they started likening their daughter’s position to that of an actual optometrist. She wishes to use her income towards expanding her business, repaying her family, as well as helping those in need.

However, being a woman in such a position in a patriarchal society is never easy. Vennela has faced plenty of brash talk from her male customers and one even hit her when the delivery of his glasses was a day overdue. Despite such obstacles, Vennela states that she has become mature and is able to communicate with her customers quite effectively. Moreover, she feels more dignified and respected in her community overall as the only girl to have opened the only optical shop in the village. She feels that she will also gain better marriage prospects due to her job.

Vennela has stated that she would like LabourNet and Essilor to look into the delay in the delivery of her glasses, as that delays delivery to her customers, who then get angry with her. She would also like LabourNet to help her get some form of financial support and set up eye-check up camps which will enable her to spread awareness about the importance of eye checks.

Page 1 of 7
12...7Next
Tags: Success Stories of Skilled Women from LabourNet
Previous Post