by Brunda Murthy
in Government, News

Maharashtra State Rural Livelihood Mission (MSRLM), also known as Umed has come up with many initiatives towards creating a positive environment to empower the underprivileged and vulnerable people in rural Maharashtra. The Livelihood Mission works with several Project Implementation Agencies (PIAs), who become affiliated Training Partners for skill development in various industry sectors. On 20th May 2017, a PAC Meeting was held in Mumbai to announce partnerships with five PIAs to scale up skill development under the DDU-GKY scheme.

MSRLM invites new project proposals under DDU-GKY Scheme. Organizations that are interested to partner with DDU-GKY program can submit their applications as per the DDU-GKY notification 20/2017 on www.ruralskills.in before 30th May 2017. For more information visit www.ddugky.gov.in.

For the State of Maharashtra, MoRD has sanctioned a skill development target of 58335  to be achieved by 2019. So far DDU-GKY program has commenced the training with 27 existing training partners covering a target of 19334 till 2019. For the FY 2016-17 as per the DDU-GKY SoP 30% of the target allotted to the existing PIAs i,e 5300 of which achieved 6044 (trained 3945, placed 2697 and under training 2099). Balance target will be achieved by 2019 is 52271 for which new training agencies selection and allotment of balance target is under progress and will be completed by end of July 2017.

A PAC meeting was held on 20th April 2017 where in 5 PIAs have been allotted a target of 12954 and an additional targets 2 old PIAs (Dhartri Foundation and Nice Computers)  1510 numbers will be allotted shortly after completing the process as per SoP. After all the allocations still a balance target of 24774 need to allotted to new PIAs for which the selection process as per the notification 20, 2017 DDU-GKY, MoRD, Govt. of India has already been initiated and will be completed by end of June 2017.

Further, the CEO, MSRLM welcomes the PIAs who have been allotted DDU-GKY  new Projects in  other states in the country after undergoing the qualitative appraisal as per the notification 20/2017 of DDU-GKY. This appraisal is valid to partner will MSRLM and they need not go through the process again.

Following are the details about the targets allotted to the PIAs 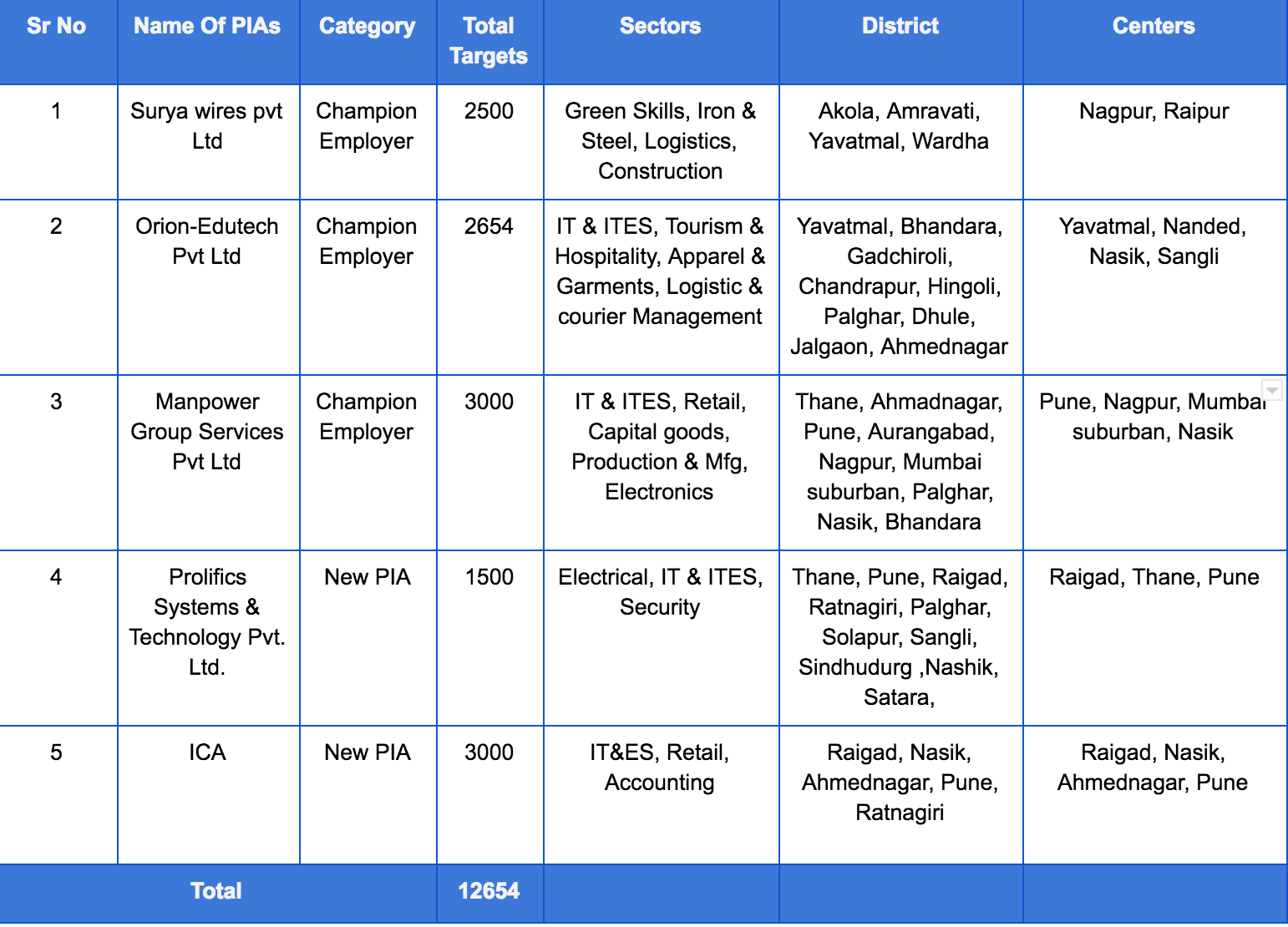 MSRLM is planning to partner with reputed and experienced agencies for implementing DDU-GKY program in order to achieve the targets by March 2019. MSRLM has issued a Notice inviting Project Proposals under DDUGKY scheme. Organizations that are interested to partner with DDU-GKY program can submit their applications as per the DDU-GKY notification 20/2017 on www.ruralskills.in before 30th May 2017. For more information visit www.ddugky.gov.in.