Skill Development is one of the key focus areas for “Momentum Jharkhand”. With the Skill Summit 2018 fast approaching, Jharkhand Skill Development Mission Society (JSDMS) is all set to host the event and strengthen and scale up many initiatives to improve employability of youth and create more jobs in the state. In this Skill Story, Amar Jha, CEO, JSDMS tells us more about the recent developments in skill space in Jharkhand and how the state is marching forward with many collaborations with the industry and training partners. Let’s read on to learn about the evolving ecosystem in the state…

In the last three years, our state has put skilling of its youth at the forefront of its development activities. Global Investor Summit (GIS) Momentum Jharkhand was held in February 2017 and 210 MOUs with various industries were signed during the Summit. Three ground breaking ceremonies have been held so far and the MoUs are being realized on the ground. In order to provide skilled youth to the industries being set up in Jharkhand, the Government has decided to make skill development as the cornerstone of development and host Skill Summit in the alternate year of the Global Investor Summit, which is a visionary decision of Hon’ble Chief Minister Shri Raghubar Das and will go a long way in meeting the manpower needs of the companies being set up.

Skill Summit 2018, Momentum Jharkhand is the first of its kind of Summit to be held on 12 January 2018, which will be attended by several Ministers, Secretaries, Ambassadors, Foreign partners, Sector Skill Council, Industry leaders and employers, Training Partners and several other delegates. Skill Summit has streamlined several processes in the Skill ecosystem which was creating bottleneck in the delivery of skilled and certified youth and securing employment. Government of Jharkhand has plans to announce 25,000 job offers on 12 January 2018, the Birth Anniversary of Swami Vivekananda and the National Youth Day. This goes to prove that if a government makes sincere effort towards employment of youth, it can be achieved, which is a large message to the Skill ecosystem of the country.

Getting cooperation from the industry to strengthen skilling and placements

While skill training is being provided in nearly 30 industry sectors in Jharkhand, some sectors have been very popular among the youth and there is a huge demand for those trades in the State. This includes sectors like Apparel, IT & ITES, Electronics, Retail, Construction, Beauty & Wellness, Auto and Auto Components, Telecom, Tourism & Hospitality, Security and Capital Goods. However, there are some other sectors which are critical to the economic development of Jharkhand, such as Mining & Minerals, Iron & Steel, Handicrafts, Agriculture etc, have not attracted enough attention from the youth of the State. JSDMS is in the process of inviting those Sector Skill Councils directly and have signed MOU to promote skilling in those vital sectors. 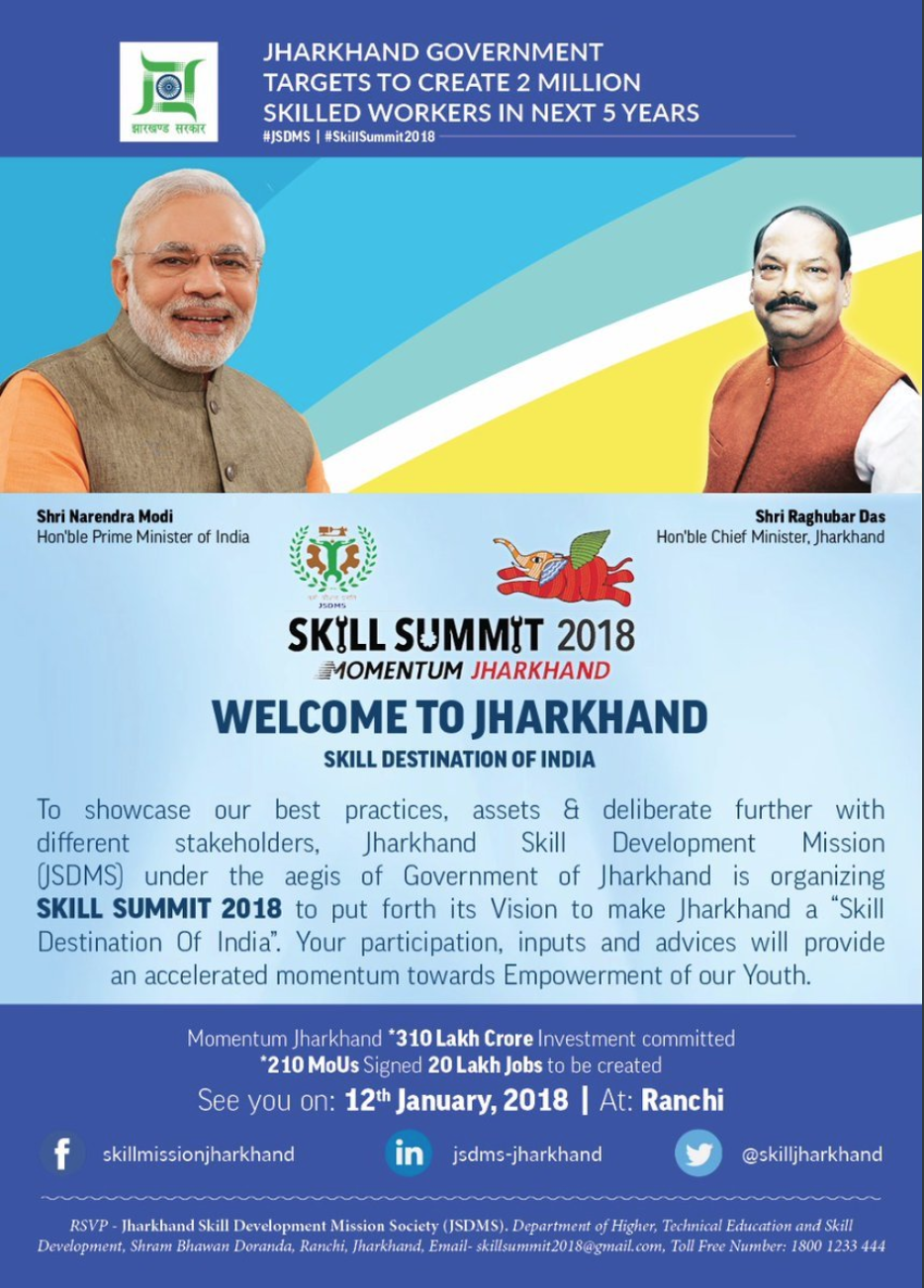 JSDMS hosted Sector Skill Council Summit on the 5th October 2017 and have signed 32 MoUs with nearly all Sector Skill Councils (SSCs). Now, we are in the process of awarding work order to those key sectors, for them to intervene directly and conduct fresh skilling as well Recognition of Prior Learning (RPL) programs. Now SSCs are promoting and mobilizing industries to Jharkhand, which is a very positive sign.

Job creation and reduction of youth migration from the state

Government is in the process of setting up of industries for which MOUs were signed during Momentum Jharkhand. The initiatives are visible on the ground and work is already in progress in the sectors of Apparel, Telecom, Healthcare, Furniture and fixtures, Mining & Mineral and Manufacturing sector. Recently, JSDMS has hosted Employer’s Conclave in Jamshedpur and Ranchi and invited local Industry Leaders, Chamber of Commerce and potential Employers to recruit the youth trained in Jharkhand and thereby reduce migration of workers. I am sure, the continuous effort in this direction will start showing results sooner than later and the migration trend will reverse. JSDMS has set up purpose built 14 Placement Centers in the State, which supports the youth in coaching and pre placement guidance, to improve placement performance meeting the expectations of the Employers. This has shown tremendous result in the last two months and employment numbers achieved are truly encouraging.

Skill – based training programs for promotion of indigenous/local talent, crafts

JSDMS in collaboration with NSDA, has set up a Core Committee to focus on the promotion of local trades and courses, related to craft, paintings etc. We plan to develop  NSQF compliant courses and get the same approved by NSQC and implement those training programs in the State. JSDMS has signed MOU with reputed institutions like IIM Ranchi, IIT (ISM) Dhanbad, BIT Mesra to support the skill ecosystem and make it robust to promote local talent.

JSDMS is also giving higher weightage and additional scores to the partners who have experience of skilling in Jharkhand and want to set up infrastructure and facilities in remote and LWE areas, as well as providing training in the sectors better suitable to local region. JSDMS has also focused on improving soft skill and life skills of the youth. JSDMS has launched Employability Excellence with College Education and Learning (EXCEL) program for College going and non-college going 10+2 pass out students, which puts its focus on improving employability of those students, who don’t want to continue with traditional education and are keen on working after undergoing skill development programs.

Quality Assurance in training and upcoming collaborative initiatives in skilling

In line with the vision of Hon’ble Prime Minister Shri Narendra Modi, JSDMS focuses on Scale, Speed and Standard (quality) in the execution of its Skill Development programs. JSDMS has launched Deen Dayal Upadhyay Kaushal Kendra (DDU KK) also known as Mega Skill Center, which are large centers of 15,000 sq ft or more and skilling about 2000 youth per annum. These are centers with Industry connect and invite industries and faculty for participation in delivery of those programs. Larger centers allow us better monitoring and evaluation of the programs, than small centers.

Attracting and mobilizing youth for training

There have been challenges in mobilizing candidates from some of the remote areas. But we have improved our outreach with the help of PRI institutions, media campaign, Kaushal Rath and empaneled Training Partners. District Skill Coordinators (DSC), Counselors with the Training partners and the District administration, support in conveying the message and benefits of skill development programs. Decent salary package by quality employers will help in improving the aspirational quotient of the skill development programs. JSDMS is approaching the quality employers directly to recruit the skilled youth. We have signed MOU with Radisson Blu, Capitol Hill Hotels, who can provide On the Job Training and higher salary package, as well as decent work environment, which will improve aspirational element in the program.

Government t of Jharkhand is in the process of coming up a favorable Skill Policy very soon, which will attract investors in the skill ecosystem of Jharkhand. JSDMS also plans to come up with Flexi MOU with industries, which will promote skilling by the Industry Partners for themselves as well as their sister concerns and ancillaries. Employer’s Conclave and Campus Placement Drives more inclined towards local industries will help reduce migration. Government also wants to promote the bare foot entrepreneurship, bank loans and incubation centers, so that the youth of Jharkhand not only seek employment but are capable of generating employment.