An inter-ministerial dialogue was held on 6th March 2018 to discuss ways of skilling trafficking victims for inclusive participation in the society and the economy. Jointly hosted by the National Skills Development Corporation (NSDC), United Nations Development Programme (UNDP) and the anti-human trafficking organisation Justice and Care, the event focussed on addressing the challenges faced by survivors of trafficking and the help needed to reintegrate them and prevent such incidents. A bridge program that prepares survivors for technical domain training under Skill India has already been prepared by Justice and Care in collaboration with Don Bosco Tech and Rural Shores Academy

Speaking on the occasion, Rajesh Agarwal, Joint Secretary, Ministry of Skill Development and Entrepreneurship, said “there are over 40 million victims of human trafficking and at least 4-5 million fresh cases are being trafficked annually. Not just as a law enforcing agency but also as a welfare state it is important to save these victims.” 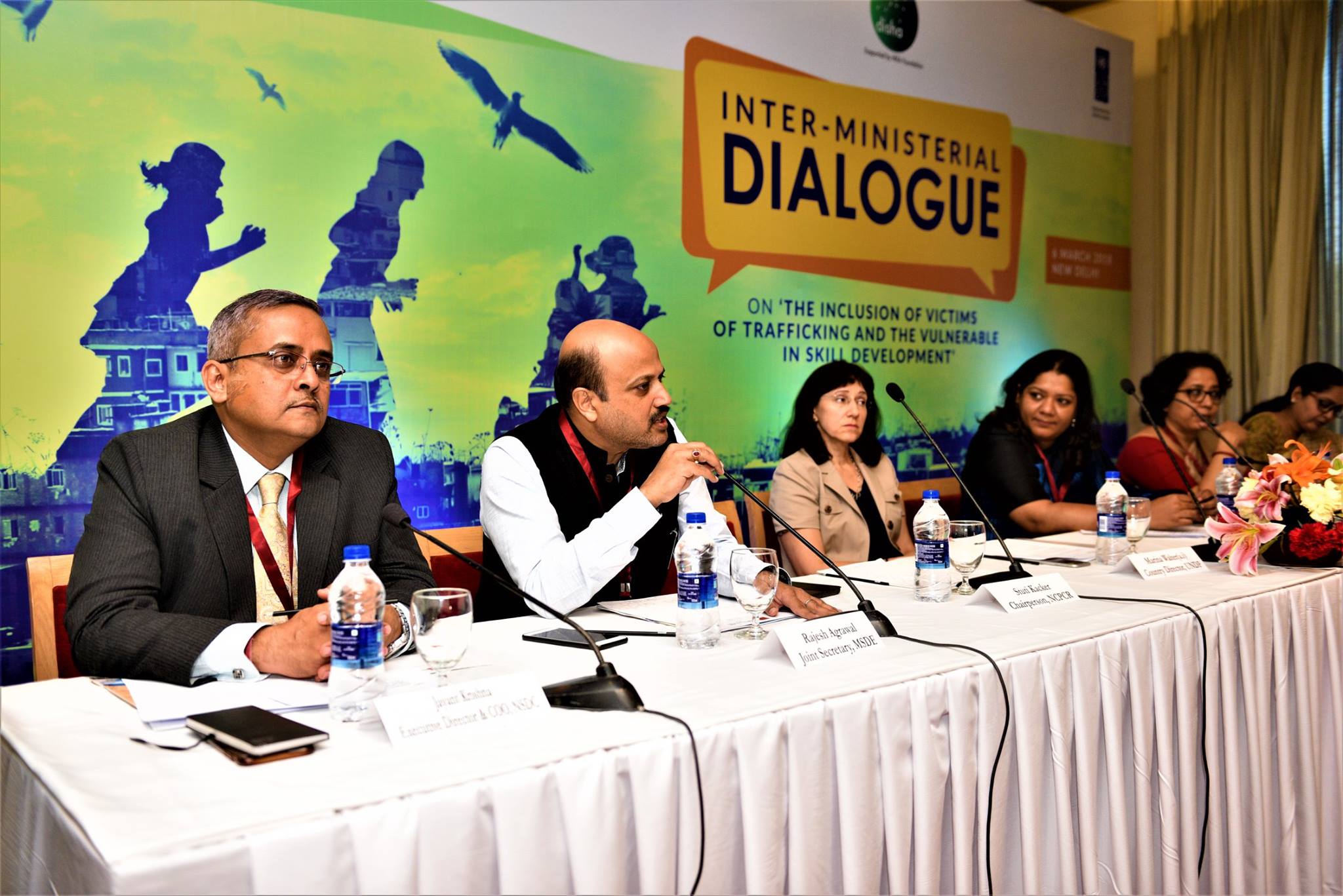 “As government, it becomes our responsibility to create pathways for vulnerable populations with little or no education into mainstream. Skills is an important component for integration.”

“The bridge course, which prepares vulnerable populations to be skill trained for jobs prepared by Justice and Care is a welcome initiative. We hope that it finds space in the policy domain,” said Aastha Saxena Khatani, Joint Secretary, Woman and Child Development.

“It is not solely a responsibility but a need to get marginalized survivors a job and their rightful space in the society,” she said.

Sheela was trafficked at the age of five. She was repeated exploited physically and made to work as a domestic servant. She had been living in terrible conditions, until she was rescued and placed in a shelter home for two years at the age of 10.Coupled with the growing frustration of her situation and the brutal trauma she encountered, Sheela began harming herself.

It was during her lowest phase she was introduced to the Foundation Course. “In spite of having absolutely no literacy level, Sheela started attending this course. Life skill lessons came as a ray of hope during tough times for her,” said Chitra Iyer – Director, Employment Creation at Justice and Care.

“This bridge course helped Sheela build self-esteem and gain lost confidence which led to increased learning outcomes. It gave her the courage to turn her life around and this has prepared her for technical domain training,” Iyer explains.

During the course, Sheela picked up numeracy well and conversed in English with her trainers. She went on to access skill training program in beauty and wellness and is currently working at an upscale salon.

“What I learnt is to respect others, but for that I need to respect myself first. The training helped me find myself,” said Sheela.

Adrian Phillips spokesperson for Justice and Care said, “Through our case work we have realised that the survivors of trafficking emerge with little or no skills, while on the other hands, there are job-oriented programs offered, which require basic literacy, mathematical skills. There was the gap in the ability of a survivor to access the formal skill courses due to his or her lack of basic literacy. The Foundation Course is a solution, whereby survivors are trained to a level so they can start accessing skill training. However, this needs to scale up so that it can reach the most vulnerable communities and thereby serve not only as a re-integration strategy but play a crucial role in the prevention of trafficking itself.”

Jayant Krishna, ED & COO, NSDC commented, “The objective of this program is to empower these vulnerable women with skills training so that they can integrate in mainstream society. NSDC, through its various skill development programmes, aims to incorporate more inclusiveness to drive a change in the society.”

Clement Chauvet, Chief, Skills and Business Development, UNDP said, “We believe that the women can be the most important agents of change in the development process. Empowering vulnerable girls and women through education, skills trainings, and means to economic independence, enables them to build better futures for themselves and their families. This leads to breaking the cycle of poverty and creating circles of prosperity.”

Like Sheela, at least 200 more girls have undergone the pilot programme in the model Foundation Course. As a result, some of these are already undergoing skill training with an increased aspiration to be a part of the eco system of training and placement, and overall vision of Skill India.