The world’s biggest international vocational skills competition, WorldSkills Kazan 2019 got underway with a grand ceremony at Kazan, Russia on 22rd August. The 48-member Indian team, resplendent in colourful attire, wowed spectators as they walked through the parade along with 62 other participating countries. 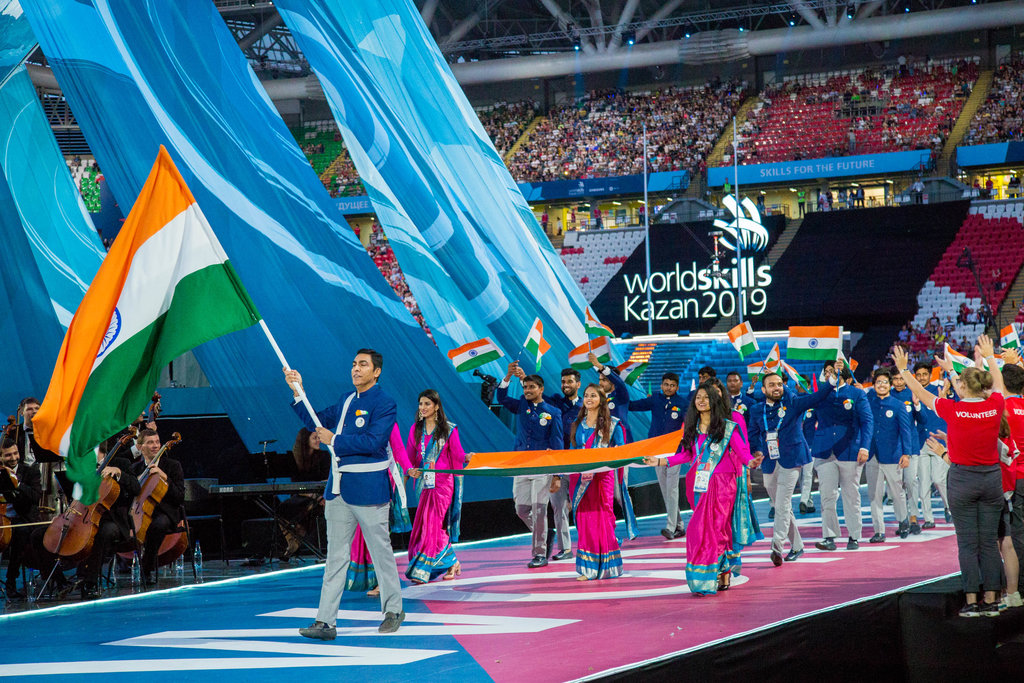 Before the opening ceremony, the competing teams came together to present their national cultures under the One School-One Country initiative. The initiative aims to promote cultural exchange between the participating countries and to raise the profile of skills and different career pathways. Participants visited a Russian School, Gynasium number 96, where they interacted with Russian school students and also participated in cultural programs.

Mr. Dmitry Medvedev, Prime Minister, Russian Federation opened the six-day event that will see more than 1,300 competitors from around the globe competing across 56 skills and trades. More than 2.5 lakh people attended the opening ceremony at Kazan Arena, where youth from 63 nations gave a variety display of various cultures.

Inauguration of the India Pavilion at WorldSkills Kazan 2019

Inaugurating the India Pavilion at WorldSkills, Dr. Mahendra Nath Pandey, Minister for Skill Development and Entrepreneurship, said, “watching Team India showcase the unique Indian culture in a foreign country is heart-warming. These youngsters are not merely competitors at an international event of such scale, they are also ambassadors of the Indian culture and it has been a pleasure to have seen this beautiful performance. My best wishes are with the team and I hope they win many awards in the skills they represent. They are the future of India and their vocational skills will open many doors for them. I am confident of a good show from the team. In the future, we will also bid for hosting the WorldSkills. The Ministry of Skill Development and other government departments are directing all their efforts to tap the talent of India’s youth by empowering them to become job-givers and not job-seekers alone. We have provided training support 12.6 lakh people and we aim to double this number in the near future with support from other ministries.” 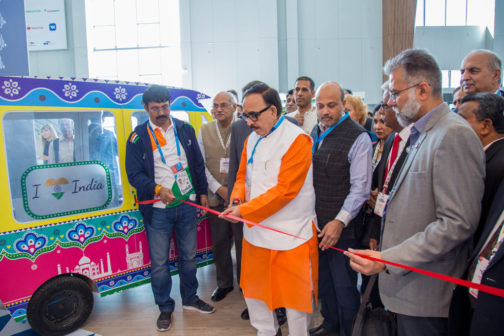 Dr. Pandey is at Kazan to motivate the participants and is aimed at building G2G and B2B relationships. During his visit, Dr. Pandey will address delegates from Industry on the subject ‘Skilling for future with Scale, Speed, and Standards: India Experience’. He is also scheduled to meet representatives of key industry players such as DMG MORI, CISCO, Siemens, Lincoln Electric to name a few, to explore ways of knowledge exchange and global mobility of Indian workforce with multinational corporations.

Contestants from India who are representing the country at the global stage have made it at WorldSkills Kazan 2019 after a gruelling selection procedure.Where they went through a series of skill competitions conducted at different levels in India. An initiative of the National Skill Development Corporation (NSDC) under the aegis of Ministry of Skill Development and Entrepreneurship (MSDE), WorldSkills India is integral to the vision of building a Skilled India, exposing young talent to the best-in-class technology, techniques, and skills amongst different trades.

During the WorldSkills competition, an international conference, WorldSkills Conference 2019, will also be, for government representatives, experts, and thought-leaders to interact on an array of topics on future of skills to maximize economic and social impact. Two new initiatives, WorldSkills Juniors, and ‘Future Skills are also being introduced in this edition. WorldSkills Junior aims at inspiring schoolchildren aged 14-16 years to join vocational and skill training and participate alongside the national teams. The focus of ‘Future Skills’ is to lay emphasis on relevant fields of activity in the era of high-tech production and the digital economy.

The fascinating journeys of WorldSkills participants from India: A snapshot

Why there’s no right age to be an entrepreneur

Why there’s no right age to be an entrepreneur