by Team NSN
in Events, Government

Telangana Academy for Skill and Knowledge (TASK) and Steinbeis India conducted a workshop on Dual VET from the German Model of Berufsschulen  on 16th February 2019 in Hyderabad. The workshop saw participation from the academia and industry in Telangana and it had a host of dignitaries from TASK, Government of Telangana, Steinbeis India and GIZ.  The event focused on sharing insights on how German Dual VET system could be adopted and adapted in Telangana to come up with a pilot project in the state. On this occasion, TASK received an award the Steinbeis India Innovation Award for Skills on Wheels initiative and JBREC College signed an MoU with Steinbeis to implement a pilot in German Dual VET in Telangana. 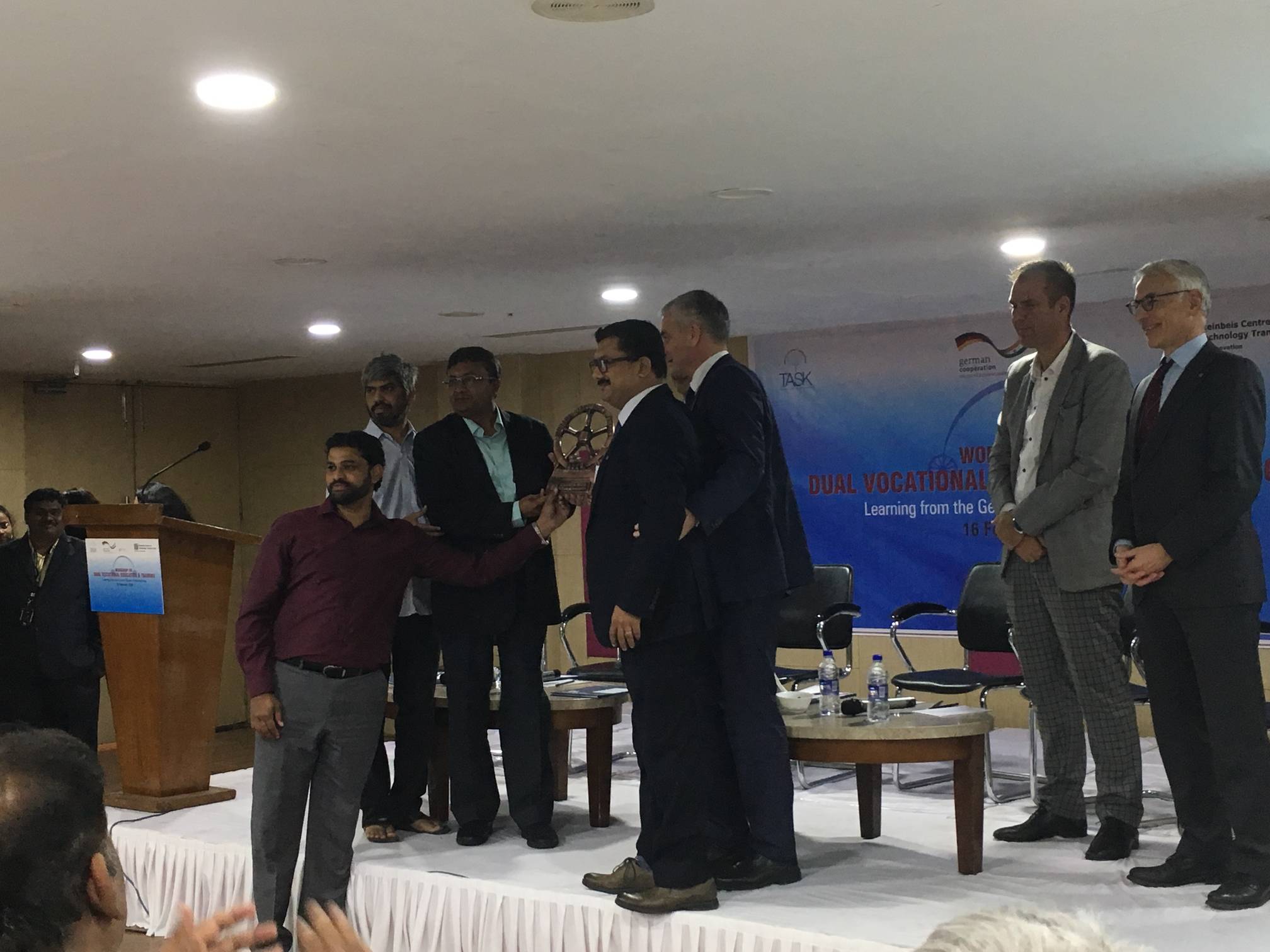 Mr Vineet Goyal, MD, Steinbeis India spoke about the vision of Steinbeis in enriching Indian education with work-integrated training and shared highlights on the occasion of completing 10 years  in India. Mr. Sujiv Nair, CEO TASK, set the context by elaborating on the partnership between TASK and Steinbeis Center for Technology Transfer in India and shared the success story of “Skills on Wheels”. This project aimed at using solar technology as a means of empowering youth with skills, jobs and self-employment. The Skills on Wheels van has so far benefited 50 youth, 60% of them are certified by Steinbeis and they are placed on jobs. He also spoke about how 3 women in Warangal have taken to self-employment through this project by selling solar lights. 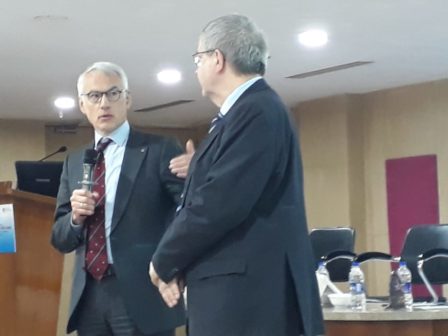 Dr Michael Auer, Chairman, Board of Steinbeis GmbH and Jan Eric Bandera, Director, Steinbeis Consulting Center presented various features of German Dual TVET that make it completely industry-integrated and prepare the students to get employed in suitable jobs. They also discussed the advantages of apprenticeships model of training that makes the students productive from day one since the quality of training and its curriculum is aligned with the industry requirements. They also credited lowest unemployment in European countries  that have adopted dual education and emphasized that  VET is not for the low achievers.  The globally successful German model could be adapted to train youth in Telangana through industry academia collaboration.

Jayesh Ranjan, Principal Secretary, Department of ITE&C and Industries, Government of Telangana appreciated the efforts of TASK in reaching out to rural youth through Skills on Wheels. He stated that through such mobile vans the youth are able to learn new skills and how Steinbeis has been a strategic partner in skill development programs in Telangana. He also spoke about the skilling as an agenda of national importance and the role of states in implementing various training schemes. He said that the lack of skilled candidates is affecting their employment index in many manufacturing industries in the state since they don’t find suitable youth who are job-ready and training them incurs heavy cost and other resources. 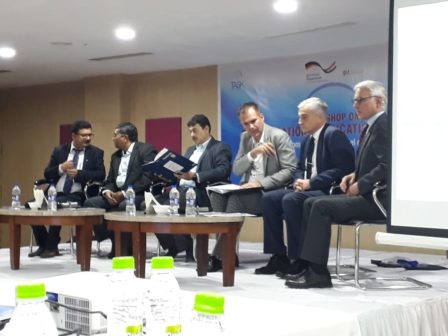 Per Borjegren, Team Leader, GIZ India spoke about their expansion plans for Hyderabad and conveyed the importance of why skill development has to be driven by the demand by the employers, how this can be done.

Stating that India has to get rich before it gets old by leveraging its demographic dividend he said GIZ has been collaborating with NSDC and MSDE for promoting apprenticeships. He shared details about how IGVET has implemented successful model of skilling in various industry clusters by making it demand-driven through active industry participation. Per expressed the need for creating awareness among the industry, particularly MSMEs, about the benefits of skilling including career counselling as critical components of evolving VET ecosystem in India. 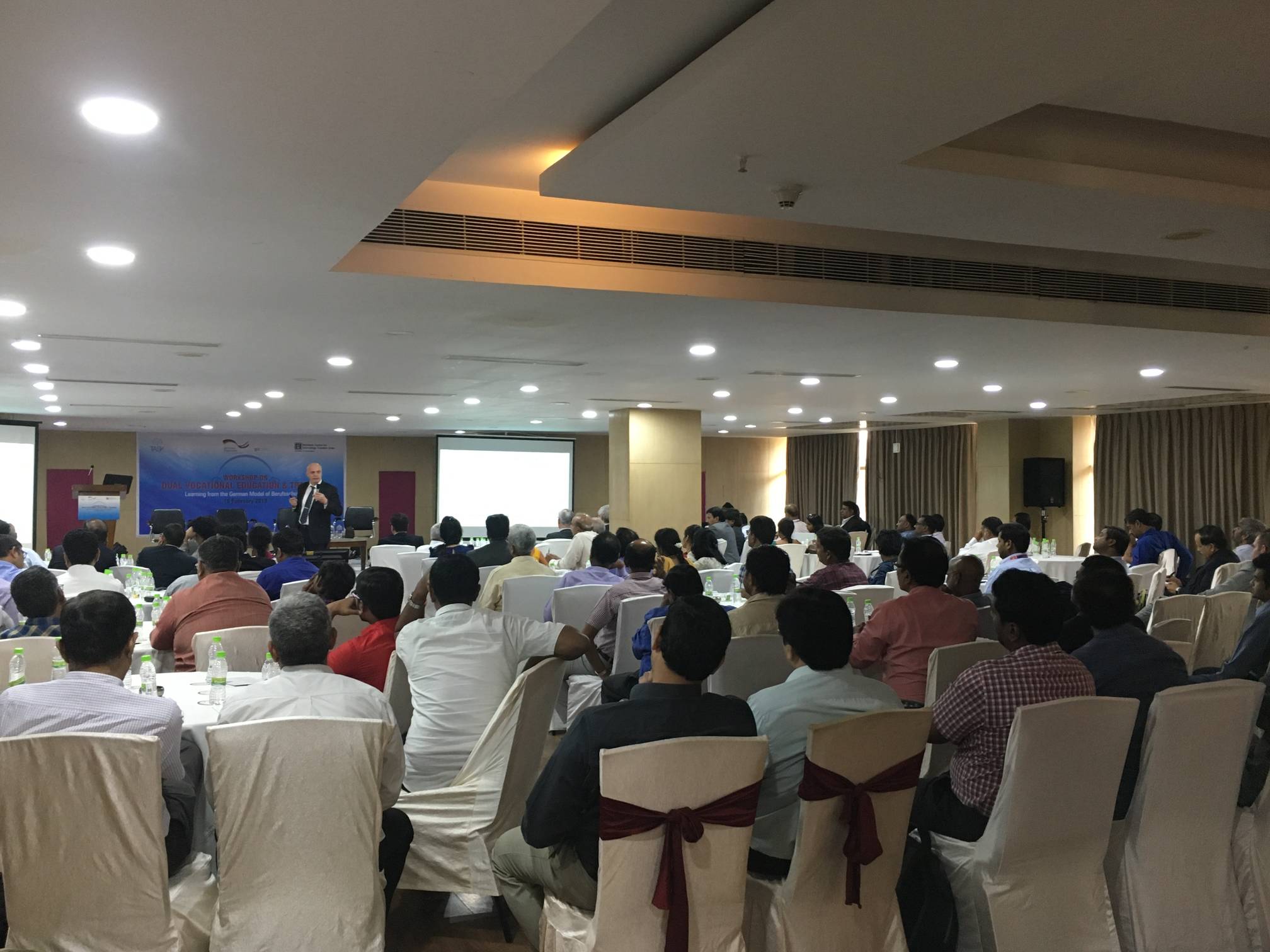 The panel discussions focused on questions pertaining to Dual VET such as how it is different from other education systems like ITI or NSDC programs, challenges to implement, acceptance in India, payment for the skilled candidates from TVET, reducing attrition, particularly for SMEs, how to attract students, government funding and other options to start the courses and make them self-sustainable.

Learning 3.0: The disappearing walls of the classroom