by Team NSN
in Events, Government
2

The Diwali Dhamaka this year just got more brighter and happier with Skill India Team’s performance at WorldSkills Abu Dhabi 2017. On the festival of lights and enlightenment, as we saw history being created on the world stage, one hopes this achievement will enthuse and inspire many young Indians to realize their talent and potential by acquiring appropriate skills, knowledge and abilities. Team Skill India won One Silver (Mohit Dudeja), One Bronze (Kiran Sudhakar) and Nine Medallion of Excellence at the 44th WorldSkills competition, making it India’s best performance so far, since it’s first participation in 2007. The team competed with candidates from 59 WorldSkills member countries.

Click here to view the detailed results of the competition: WorldSkills AbuDhabi 2017 Results.

Highlights of the Competition 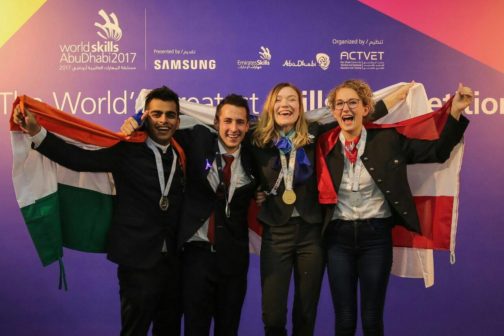 Mohit Dudeja won a silver for Patisserie and Confectionery whereas Kiran bagged a bronze for Prototype Modelling. Nine Medallions for Excellence were won in trades/skills like mechatronics, brick-laying, restaurant service, automobile technology, jewellery, graphic design technology, mobile robotics, beauty therapy and car painting. With winners being presented medals at a glittering closing ceremony on the day of Deepawali, Indian participants and winners have truly made the Festival of Lights sparkle for the country! Mohit Dudeja also won the “Best of Nation” award for receiving the highest marks among the India Contingent.  Shahad Shahida Manzil came 3rd in 3M Sustainability Challenge for optimal utilization of paint during the Car Painting competition. 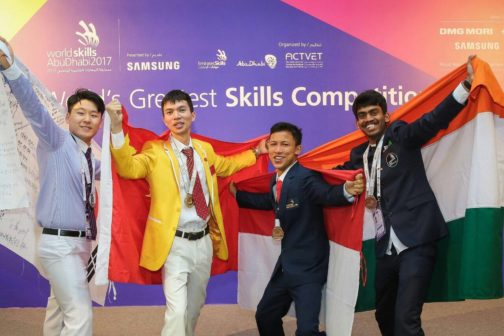 1,300 young people from 59 WorldSkills Member countries and regions showcased their talent across 51 skills competitions, between 15-18 October. This was the first time that the WorldSkills Competition has been held in the Middle East and North Africa region. A young team of 28 participants in 26 skill categories represented India this year led by, National Skill Development Corporation (NSDC) under the guidance of Ministry of Skill Development and Entrepreneurship (MSDE).

Some of the Indian Experts who trained the competitors in their respective skills, were also elected to perform following responsibilities at the next WorldSkills competition scheduled in 2019 at Kazan, Russia.

Congratulating Team India on their win, Shri Dharmendra Pradhan, Minister for Skill Development and Entrepreneurship said, “It has been an incredible and by far, the best performance by the Indian Team since we began participating in WorldSkill International Competition! This Diwali has really been special. It is an important day in the skills calendar for India and a big moment of pride for our country. My hearty congratulations to the Indian Team on their exceptional performance at WorldSkills Abu Dhabi and bringing laurels to the nation. Skills have the power to transform individual life, power to change society and power to change the world and we believe skills will make the New India of our dreams.”

“Platforms like WorldSkills help us make skills aspirational for the youth of our country. As a token of recognition and to encourage more youth to take up skills, we would be awarding cash rewards to the winning candidates who have brought laurels to the country. The country will continue to invest in training and education, as part of a strong commitment to youth development, which is a fundamental aspect of the India Vision 2022,” Shri Pradhan added.

Congratulating team India, Shri Rajesh Agrawal , Official delegate India for WorldSkills 2017 said, “We are delighted to see Team India bringing home a Silver Medal, a Bronze Medal and 9 Medallions for Excellence from WorldSkills 2017, Abu Dhabi. The country should take great inspiration from the grit, the confidence and the determination with which the young team has performed at the Olympic of Skills and proved their mettle against countries like China, Russia, Korea, Japan, Brazil. I thank all individuals and corporates who have made this recognition possible for Team India and for the country. Our preparation for the next WorldSkills will begin soon and I encourage more and more youth to participate and have the honour to represent the country at such international levels.”

Commenting on the occasion, Manish Kumar, Managing Director and CEO, National Skill Development Corporation (NSDC) said, “Big congratulations to all our champions and our heartfelt thanks to them for adding to our festivities and celebrations! We have yet again proved the potential and passion that our nation’s youth has. We are confident that our champions will inspire others to opt for vocational training as the mainstream career option. The competition has provided a platform to benchmark our skills against the best in the world. After witnessing the current accolades, we are certain that we will only get better and more efficient with time. We would also like to thank industry bodies such as CII, FICCI, CREDAI, Industry Partnership and Sector Skill Councils for their support in bringing this victory home.”

(This article is based on a press release from WorldSkills India, NSDC)