by Team NSN
in Events, Government

Competitions play a crucial role in motivating performance. Skill India Team that won accolades in the World Skills 2017 is sure to encourage many more to enrol in various skill based training programs. Ministry of Skill Development and Entrepreneurship (MSDE) hosted an event to recognize the winners and outstanding performers at the WorldSkills 2017 through monetary reards. The felicitation ceremony was held on 28th December at Delhi in the august presence of Hon’ble Minister for Petroleum & Natural Gas and Minister for Skill Development & Entrepreneurship, Shri Dharmendra Pradhan.

Highlights of the felicitation event

Kiran Sudhakar from Bangalore received Rs. Six Lakhs for winning a Bronze in Prototype Modelling skills category 11 competitors were rewarded with Rs. Two lakhs each for winning Medallions of Excellence in Nine trades Experts who trained these candidates received reward money of Rs. 3 lakhs (for Silver), Rs. 2 lakhs (for bronze) and Rs. 1 lakh each (for Medallions of Excellence)

The Ministry disbursed reward money worth Rs. 50 lakhs amongst winners and their respective trainers, in various categories, for their participation in WorldSkills International Competition, that was held in Abu Dhabi in October this year. Led by National Skill Development Corporation (NSDC) under the guidance of MSDE, a team of 28 participants represented India in 26 skill categories at the skills competition. These talented and skilled millennials hailing from different corners of the country, had competed at the WorldSkills Competition against their peers at the global level. The competition had drawn 1,300 young contestants from 59 WorldSkills’ member countries and regions, showcasing their talent across 51 skills competitions.

Applauding the accomplishments of the participants, Shri Dharmendra Pradhan said, “It is encouraging to see the passion, efforts and dedication of these young competitors that has made the nation proud. Such competitions not only give opportunities to candidates to represent the country at global platforms, but also raise the benchmarks of skilling. We truly believe that these Skill India ambassadors would inspire many others to take up skill training, which is the key to garner success and respect in the society.”

Shri Pradhan further added, “It is the need of the hour to respect and celebrate skilled individuals. The talent or skills must not be confined to any rigorous framework. Essence of human qualities like hard work, honesty and simplicity are of great value to the working ecosystem. We are certain that we will see much stronger participation in the forthcoming competitions. It is heartening to note that non-conventional skills such as Patisserie and Confectionary, Bricklaying, Mechatronics, Jewellery Designing are the new mainstream.”

In his congratulatory remarks for the Indian Team, Shri Anantkumar Hegde, Minister of State for Skill Development & Entrepreneurship said, “These young boys and girls have spent years preparing to compete at the global level to ensure their skills meet the global level. It is commendable that we had participation from some of the most remote locations in the country, and these young stars have outperformed their global counterparts, entirely by their talent. We urge these talented millennials to contribute further by leading as role models and encouraging many others.” 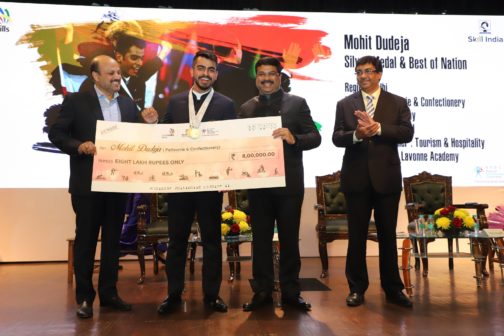 Team India exhibited exemplary performance at the competition by winning One Silver for Patisserie and Confectionary (Mohit Dudeja), One Bronze for Prototype Modelling (Kiran Sudhakar) and Nine Medallions of Excellence. Showcasing its best performance, Indian contingent ranked amongst the top 20 countries at the WorldSkills competition at Abu Dhabi. 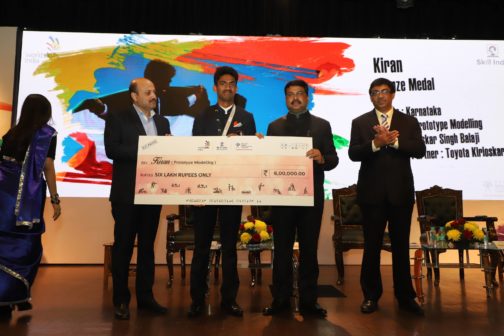 Mohit Dudeja from Delhi NCR was rewarded with Rs. Eight Lakhs for winning a Silver in Patisserie and Confectionary skills. He is also the winner of the “Best of Nation” award for scoring highest amongst the India contingent. He ranked above his peers from other countries such as China, Switzerland, Canada, Korea and UK. Kiran Sudhakar, who hails from Bangalore, was awarded a cheque of Rs. Six Lakhs for winning a Bronze in Prototype Modelling.

The experts, who had trained the winners were also felicitated with reward money in various categories – Rs 3 lakhs (for Silver), Rs. 2 lakhs (for Bronze) and Rs. 1 lakh each (for medallions of excellence).

On this occasion, WorldSkills India Guidelines and Handbook was also released. The book outlays the structure for governance and operations of skill competitions in the country.

Widely and informally regarded as the Skills Olympics, WorldSkills Competitions are held in different countries every two years and brings together over 1,000 participants, below 23 years, from across the world to compete in more than 46 skills.

(This article is based on a press release from MSDE, Government of India.)